Koda's mother is the mother of Koda and a minor character in the 2003 Disney film Brother Bear.

She is the first bear to be seen in the film. She fights against Kenai and his brothers Denahi and Sitka in order to protect her son and ended up falling off a glacier when Sitka broke the part she was on in order to save his brothers. She survives the fall and runs off, whilst Sitka perishes. She is later chased and killed by a vengeful Kenai, who believes she killed his brother. She is then taken into the world of the Great Spirits.

She is mentioned various times in the film after these events, and is also seen in Kenai's flashbacks when he puts the pieces of Koda's story together. In another flashback, Kenai was hiding in the berry bushes before Koda's mother appeared and Kenai thought that she is looking for him. But she was really calling for Koda.

She is last seen in in spirit form nuzzling her son for the last time before she, along with Sitka, returns to the Great Spirits.

Koda's mother is mentioned twice in the film's 2006 sequel. First when Koda asks her and the other spirits to turn Kenai back into a human so he could be with Nita. Her second mention comes when Koda, Kenai and Nita look at the Great Spirits and Nita says that her mother is up there to which Koda replies that his is up there too.

Her behavior is same way as real-life bears, but she's very caring for her son Koda, even as a spirit. 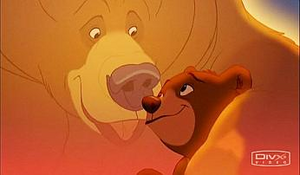