Kodachi Kuno is one of supporting characters of Ranma ½ series. She is a one of Ranma Saotome's suitors. She is the younger sister of Tatewaki Kuno and the daughter of Principal Kuno.

In the Japanese version, she is voiced by Saeko Shimazu.

In the English version she was voiced by Teryl Rothery for Seasons 1-4, Erin Fitzgerald for Season 5 and currently Sylvia Zaradic for Seasons 6-7.

She is very agile, and she is not averse to using unorthodox methods in combat such as rigged weapons, explosives and various poisons. She attacks other people prior to competitions in order to win by default, which she calls "fighting in all fairness before the match." She becomes enamored with Ranma after he saved her from a fall, and attempts to make him hers at any cost. She also hates Ranma's female form, believing "her" to be a rival for Ranma, while her brother Tatewaki hates the male form, which is a frequent source of conflict between them. She is a good cook who prepares elaborate meals, and she often uses culinary expertise to her advantage by placing poisons, toxins, serums, and other strange substances in her victims' food to attain something she wants from them.

Kodachi is considered the most malicious of Ranma's fiancees and although she is shown in less occasions than Akane, Shampoo and Ukyo, her personality and methods make her the most dangerous of the four. She is shown to have a skewed version of what would make Ranma happy; she is considered to be pursuing Ranma mostly out of personal vanity, as she does not show to be particularly interested in his happiness or well being.

She is the captain of the gymnastics team of the St. Hebereke School for Girls, who is referred to as "The Black Rose", apparently due to her signature theatrical style of exiting a scene by leaving behind a swirling trail of black roses accompanied by high-octave laughter. She is an expert in Martial Arts Rhythmic Gymnastics, making her skilled in acrobatics and the use of balls, clubs, hoops, ribbons, and ropes as weapons.

Kodachi and Tatewaki share a dysfunctional, but caring relationship between each other. When it's revealed that the two are related after the former challenges Akane to a fight for Ranma, Tatewaki admits that she is completely insane, but tells Ranma to take care of her, and would even allow Ranma to date her. Kodachi refers to Tatewaki as "big brother" and would have him come to her school for Parents Day.

Upon their meeting, Kodachi instantly tried to seduce Ranma, much to his chagrin, and ultimately failed when met by a kick courtesy of Akane Tendo. She is completely infatuated with him, and like Shampoo, will go to any lengths to be with him, albeit her methods are usually more extreme (i.e. blackmail, paralysis powder, etc.) Ranma doesn't reciprocate any of these feelings and believes her to be a psychopath and most likely, more of a nuisance then Shampoo was.

Because of their rivalry over Ranma and the Martial Arts Rhythmic Gymnastics challenge, Kodachi seems to hate Akane and has tried to kill her multiple times. Akane, also hates Kodachi and like others, believes her to be crazy.

Kodachi is an expert in Martial Arts Rhythmic Gymnastics, making her skilled in acrobatics and weapon use in the form of ribbons, balls, clubs, hoops, and ropes, although her ribbon is her most commonly used weapon. She is incredibly agile and will typically make an aerial entrance or exit. A very cunning individual, she is not averse to using unorthodox methods in combat such as rigged weapons, explosives and various poisons. In competition, certain techniques of hers were construed as cheating, like using hidden spikes in her club. But she used them so skillfully that the judge couldn't notice them when pointed out. Her teammates also had to leave after being discovered to be helping her move the arena. On the other hand, disguising a steel rod as a rope, or throwing her brother at Ranma, were within the main framework, which simply prohibits barehanded attacks. Kodachi has been shown to wear her characteristic leotard under virtually all her clothing, presumably because it permits a superior range of motion while in combat.

Compared to the rest of the regular Ranma cast, Kodachi has apparently been treated as roughly equivalent to Ukyo or Shampoo during free-for-alls gang-ups aqainst Ranma, Hinako or Genma, outside of "Martial Arts Rhythmic Gymnastics" tournaments (within these constraints she came close to defeating Ranma, as he/she was early in the series, before Cologne's power-up, and limited to non-barehanded attacks), and seems to have superior recovery time, as the latter two took considerably longer when drained by Hinako. However, any actual semi-confrontations during these situations have been limited to a few panels, alternately been completely off-screen, so it's very hard to draw a conclusion on these merits alone. More importantly she has also been able to fight / parry with Tatewaki on even or slightly superior footing, but it's unclear whether he held back or not (as he seems inclined to do against females). 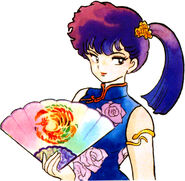 Retrieved from "https://hero.fandom.com/wiki/Kodachi_Kuno?oldid=1698537"
Community content is available under CC-BY-SA unless otherwise noted.