Kohaku is one of the five main heroines of Tsukihime alongside Arcueid Brunestud, Ciel, Akiha Tohno, and her sister Hisui. Her character image song is Yarawaka na Kizuato, sung by Cocco.

She is the older of the two twin maids in the Tohno mansion. Her name, Kohaku, is the Japanese word for amber, referring to her eye color.

Kohaku was originally a member of a branch family of the Fujou clan, but was brought with her sister Hisui to live in the Tohno mansion, because the Fujou clan had a special power of giving others energy. Makihisa Tohno needed this ability in order to keep control of his body. This transfer of energy is strongest though the means of sexual intercourse.

Due to this, she, as a child, was constantly raped by Makihisa, and unlike the other children, she had to watch them from afar as they played together. Just before Shiki Tohno leaves the mansion to live with the Arima family, Kohaku gives him her favorite ribbon and makes him promise to return it, indirectly begging for him to return.

Some time later, Makihisa decided to give more freedom to Kohaku, but in order to do it, she had to take care of an imprisoned SHIKI (who was imprisoned due to the Shiki incident and the fact Makihisa did not want to kill his son). However, some time later, due to having to keep control of his body, just like his father; SHIKI raped Kohaku. This drove her further into despair and decided to get revenge on the Tohno family. To do it, she twisted and brainwashed SHIKI with her medicinal herbs, all for the sake of her revenge. Some time later, Akiha and Hisui learned of Makihisa's sin against Kohaku, and it depressed them greatly. Akiha freed Kohaku from Makihisa and she became a normal servant. But Hisui was still depressed so Kohaku, seeing her sister's free enthusiasm falter for her sake, promises Hisui that she will "take on her role" until she was cheerful again. Ironically, it is because of those words that Hisui is unable to return to her old self.

Due to her intervention, SHIKI killed Makihisa, which was the reason why Shiki returned to the Tohno mansion.

Kohaku is always seen to be smiling and cheerful, being especially gifted with medicine which she learned from Jinan Sougen. She has a habit of breaking many (and valuable) objects when cleaning indoors. Though she always states that it was not intended, some characters, like Akiha, seems to think otherwise.

She claims to hate Shiki for the silent connection they shared as children (watching one another but never meeting), but it is revealed that she is actually in love with him, and it is in part why she wanted to take on Hisui's role in the first place. Kohaku simply wanted to innocently love the boy named Tohno Shiki, just as Hisui did as a young girl.

Kohaku has short red hair, like her sister. She wears a blue ribbon at the back of her head and wears a brown Japanese kimono.

Kohaku merely appears as a supportive character, who is a cheerful maid who is very close to Akiha.

In the anime, based on that rute, Kohaku has a secondary role and she remains as Akiha's cheerful maid. Despite Akiha's cold demeanor towards Shiki, Kohaku knows that in fact Akiha loves her brother very much. After Akiha starts succumbing to her demon blood, she helps her by letting Akiha to suck blood from her breast. Despite Akiha's desire to get Shiki not involved about the secrets of their childhood and the Tohno family, Kohaku's (with the help of Hisui) provide Shiki information about the family at the right moment in order to make him discover who he is.

Because the events of Arcueid and Ciel, which keep Shiki away from the Tohno mansion, Kohaku simply appears as a cheerful maid and a supportive character.

It is eventually revealed that all of the bad things that were happening was indirectly because of her and that she manipulated everyone in the Tohno mansion towards their deaths for eight years in order to give her life a purpose. After succeeding in SHIKI killing Makihisa and Shiki killing SHIKI, she decides to kill herself after getting her revenge aganst them.

In Hisui's True Ending, after revealing everything to Shiki, Kohaku commits suicide by stabbing herself in the chest to end her "doll's existence". It is revealed that she did not kill Shiki because he gave Kohaku some sort of hope eight years ago, just by looking at her through the window she was trapped in.

In Hisui's Good Ending, she tries to commit suicide by ingesting poison instead of stabbing herself. She is saved by Shiki, who cuts the "lines" of the poison within her. She is left in a coma, but she soon wakes up and seems to have lost her memory (it is implied she did it on purpose). Forgetting her past and what she has done, Kohaku is renamed "Nanaya" by Hisui, and returns as a peaceful maid to the Tohno Mansion.

Shiki returns to the Tohno house, where he is greeted by Kohaku. Like in Hisui's route, he wants to give back the ribbon that the quiet girl who watched him from afar when they were young, gave him; but he mistakes that girl for Hisui. During the Welcome Party for Shiki, after drinking all night, Shiki goes out to cool a little where he talks with Kohaku about the quiet girl, the ribbon and the promise. Kohaku looks at him with concern as she warns Shiki that he will only find suffering in the Tohno house and wonders aloud why did he have to return. Noticing that Shiki is intrigued about the mysteries about his past, Akiha tracks down and kills SHIKI before Shiki even starts having dreams visions of him. Kohaku helps her in doing so.

Hisui reveals to Shiki that Kohaku is the girl who gave him the ribbon in their past. Due to SHIKI's ability of immortality and the nature of Akiha's powers, he transfers the burden of his madness caused by the inversion impulse of his Tohno blood over to her when Akiha absorbs his energy to kill him. After this, Akiha begins to slowly succumb to the Tohno blood, despite her originally being quite capable of controlling it. She synchronizes with Kohaku in an attempt to suppress this, but it is not enough, since she now has SHIKI's bloodlust itself. She begins hunting for victims on the streets at night in SHIKI's place because she can't control herself, with only Kohaku being aware of it.

Kohaku reveals everything to Shiki and comments that Akiha is out of control. According to her, the only way to stop it is by reciprocating Akiha's feelings for Shiki. However, Shiki refuses to do such thing because he loves Kohaku and returns the ribbon to her. He lies to Kohaku (not revealing that Hisui was the one who told him) by saying that he noticed it because Kohaku already knew of the ribbon promise while Hisui did not. Kohaku cries and decides not to continue with her revenge on the Tohno family. She and Shiki have sex and offers her ability to Synchronize with Shiki so that he can stop Akiha. The two then go to the school in order to stop her.

There, Akiha tells Shiki that the Tohno family has wronged Kohaku to an incredibly degree and everyone, even him, to Kohaku, are just pawns to her revenge. However, Shiki tells Akiha that he loves Kohaku no matter what, prompting her to attack Kohaku by piercing her chest with her hair. Shiki is devastated by this and attacks Akiha, however he realizes that he cannot bring himself to kill her. At that moment, Kohaku appears, completely unharmed, telling Akiha to stop because she holds no resentment towards her and she has already forgiven the Tohno family. Akiha realizes that the reason why she did not succeed in killing Kohaku is because she was not really trying.

Kohaku is the only character with only one ending, which is also her True Ending, in which she decides to forgive the Tohno family and goes for vacations with Shiki to the Nanaya forest.

In Kagetsu Tohya, her plotting manipulative personality is comically exaggerated. She is apparently also a mad scientist. If the player makes a bad choice, sometimes Kohaku would imprison Shiki in the same place SHIKI used to live in order to test her drugs on him. However, Kagetsu Tohya is just Shiki's dream, so she does not act as the real Kohaku would.

In Episode 2, Kohaku convinces Akiha and the girls to have a volleyball match in order to get Shiki. In Episode 10 she uses her special drugs to revert Akiha's personality to one of a 4-year old. Later she creates stories based on Hisui's detective persona with comical results. Kohaku does not hold any interest in Shiki, because she wants him to end up with Akiha. Kohaku's scheming personality is exaggerated, to the point her actions should be considered as trolling. In Episode 12. she is one of Shiki's dates, although he barely spends time with her because Shiki convinced her that he was trapped in one of her experiments. She and Hisui finally appear at the Ahnenerbe party together with Sella and Leysritt.

Kohaku normally lacks any sort of combat capabilities. She is a Synchronizer, which allows her to transfer energy through the exchange of bodily fluids. While it can be done with those of the same sex through a transfer of blood, it is most effective through sexual intercourse with someone of the opposite gender.

During Melty Blood, under the influence of Night of Wallachia, White Len, or Dust of Osiris, she gains the ability to create lots of mechas, such as Mecha Hisui and Mecha Shiki. 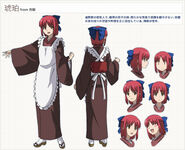 Magical Amber
Add a photo to this gallery
Retrieved from "https://hero.fandom.com/wiki/Kohaku?oldid=1831771"
Community content is available under CC-BY-SA unless otherwise noted.