Koichi's first appearance in the part was during Jotaro's arrival. He was accidentally knocked down and was helped out by Jotaro for directions. They later watch as Josuke was threatened by bullies and beating them up with his stand which in Koichi's perspective, only looks as if the bully was punched out of thin air. He later joins the two, getting a chance to overhear their discussion about stands before observing a robbery which Josuke stopped with his stand. Since he is not a stand user yet however, Koichi was unable to see Crazy Diamond.

Some time after Josuke beaten Angelo, Koichi was invited to check out a house. He approached the entrance while reading the word on the gate before having the house gates closed on his neck by Okuyasu, allowing Keicho to fire an arrow at Koichi. He was slowly dying, both due to blood loss and his inability to wield a stand. Keicho decided to use his unconscious body as bait for Josuke. Eventually however, Josuke was able to heal Koichi, allowing the latter to develop a stand without dying. During Josuke's fight against Keicho, he attempted to fight the latter off, only to be beaten up immediately.

Some time later, he was tricked by a scammer named Tamami Kobayashi into becoming guilty, allowing his stand, The Lock to get ahold of Koichi. Luckily, Josuke and Okuyasu were able to arrive just in time before the enemy stand could do too much damage and Tamami was forced to retreat. Koichi later meets with Tamami again who used his stand on the former's mother and sister. Koichi was able to awaken his own stand during the fight, allowing him to scare the scammer into submission.

A few days later while looking into some leads from Tamami, Koichi and Josuke stumbled upon Hazamada and his stand, surface. Koichi was punched in the face due to Surface's ability but he was able to save Josuke with Echoes ACT 1. Koichi later managed to trick Hazamada into going the long way and as a result, the enemy stand user was defeated and beaten up. Some time later, Koichi attracted the attention of a fellow student named Yukako Yamagishi who was romantically attracted to him. Koichi was creeped out by this while Josuke and Okuyasu decide that the best way to ward her away is to slander him. This backfires when Yukako decides to kidnap him and trap him in a house with the excuse to teach him. Koichi however was able to contact his friends using his stand and had to fight off Yukako while waiting for them to arrive. During the fight, his stand evolved into Echoes ACT 2 which allowed him to finally defeat Yukako. Upon approaching her however, his stand was held in place while the ground crumbled below her feet. Despite everything Yukako did to him, Koichi still decided to save her which earned her respect.

He is with the group during the hunt for Red Hot Chili Pepper. After Okuyasu was dragged into a power line, he was the only one who was particularly distraught until Josuke restored Okuyasu back towards his own severed hand. He later joins Josuke and was tasked with guarding the docks where Red Hot Chili Pepper's stand user appeared. Josuke was able to beat the enemy stand user and the team succeeded. Some time later he meets up with Hazamada and the two decided to visit a famous mangaka named Rohan Kishibe. They were allowed inside and got the chance to observe Rohan's proficiency at drawing and eccentric methods. Koichi however was persuaded by Hazamada into viewing Rohan's manuscript, resulting in the two being affected by Rohan's stand, Heaven's Door. Koichi in particular lost a portion of his memories and weight due to Rohan's stand ability. The next day he subconsciously entered the mangaka's house again and was unable to call for help. Okuyasu attempted to help him but fell victim to Heaven's Door. Luckily, Josuke manages to save the two by beating up Rohan. This is where Koichi reminisces the explanation about the reason behind Josuke's uncontrollable anger upon having his hair insulted.

A month later, Rohan has finally recovered and decided to invite Koichi to investigate an odd alley. They soon discover that it was inhabited by a ghost of a murder victim and the two were notified of the existence of a serial killer in Morioh. He soon notifies his friends about said information who began to take the threat seriously upon realizing that the serial killer in question possesses a stand. During the investigation, Yukako was slowly beginning to abandon her aggressive ways and as a result, Koichi began hating her less and less. It got to the point that he was willing to go blind to help Yukako find her old appearance.

During the investigation, Jotaro got a lead on the serial killer and invited Koichi to come along. The two met a tailor who claimed to be the creator of the killer's suit. The tailor was swiftly killed by the killer's stand and during the fight, Jotaro was able to determine how the enemy stand works. Unfortunately in the process of figuring it out, he was blown up and severely injured. Koichi was forced to fight the enemy stand alone, using his stand to create a ball of heat to distract the enemy stand. While calling his friends, he soon figured out that the phone he used emitted heat, resulting in him getting blown up and cornered. His stand however has evolved and gained sapience, being able to talk to Koichi as well as having a new ability to weight its target until it's immobilized. This attracted the attention of the enemy stand user's attention, the serial killer himself. Koichi was able to snatch the killer's wallet, allowing him to get the identity of the serial killer whose name is Yoshikage Kira. Koichi taunts him before getting punched and was later healed by Josuke who arrives to the scene.

In the process of the investigation, Koichi joined the main cast which was later locked in by a stand. Jotaro was able to counter the enemy stand and they were able to exit the house. Koichi contributed in the defeat of Cheap Trick and Yuya Fungami before being kidnapped by Terunosuke Miyamoto. Luckily Josuke and Yuya were able to free him. During the final battle, Koichi was able to immobilize Kira's hand long enough for Jotaro to beat him up. Koichi appears one last time to say his goodbyes to Reimi before she ascends to heaven.

After the events of Part 4, Koichi was tasked by Jotaro to find DIO's son. He learned to speak Italy from Rohan before being sent there. In the airport, he is met by Giorno Giovanna who steals his luggage. He was able to stop him from getting too far using Echoes ACT 3. Giorno however took off on foot and transformed the luggage into a frog for safekeeping. Koichi later wandered around until he finds Giorno again. He was unfortunately knocked back by Gold Experience's ability and was unable to retrieve his luggage. He was however able to determine that Giorno is the target he was supposed to be looking for.

Some time later, he enters Giorno's apartment before finding his luggage, almost costing Giorno his test. On his way out, he encounters the dead janitor and was later attacked by Black Sabbath, the enemy stand which was responsible for the murder. Koichi and Giorno decided to put their differences and destroy Black Sabbath. Koichi later returns and did not notify Jotaro of the success of his mission.

Echoes is unique among most Stands in that its a Stand that "evolves" between "ACTs" and is able to shift between them at will. As Echoes ACT 1, the Stand itself is physically weak and slow, but it begins to show its potential through its ability to "write" sound effects on people and objects, with its main usage is to write onomatopoeia. If it is an onomatopoeia, the words themselves are able to affect the mental state of those around them, such as when Koichi manages to save his mother from Tamami Kobayashi's The Lock by writing "Believe in me." on her, thus restoring her from despair and removing her guilt. he effects increase if directly attached to a figure, and these effects can be ignored if enough will is put against them.

Echoes ACT 2 is still a weak Stand psychically, the Stand grows far faster and gains a more useful version of its last ability, this being to write onomatopoeia on objects to cause them to be affected by them with touched, such as writing "whoosh" to produce strong wind, "boing" to make an object bouncy, or even "dorarara" to cause a flurry of blows akin to a standard Stand Rush. Despite this, Echoes ACT 2 can only use one of these onomatopoeia at a time.

Echoes ACT 3 is a very different entity compared to its previous ACTs, as it loses its more ranged focused strategy while instead gaining a fast, powerful bruiser style like a majority of other protagonist's Stands. It's effect also switches as well, as its main attack, "3 Freeze", multiplies the weight of a target to the point they are often handicapped movement-wise. This weight increases the closer a target is to Echoes. Like Echoes ACT 2's ability, this ability can only affect one target at a time, and if the target manages to get five feet away from Echoes, the effect vanishes. 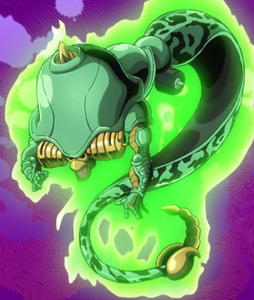 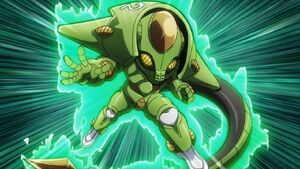 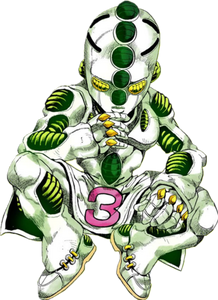 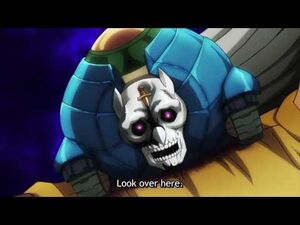 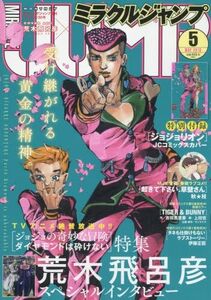