Playing knife games.
Pranking people.
Gathering murder evidence even after the deaths of those involved.
Having tea with D.I.C.E.

To kill Miu Iruma via manipulating Gonta Gokuhara's altruism (succeeded).
To mercy kill everyone and allow Gonta Gokuhara to escape from the academy alone by provoking Kaito Momota's beliefs (failed).
To usurp and play the role of the mastermind (formerly; partially succeeded).
To trick Monokuma with an unsolvable murder (succeeded; failed shortly afterwards due to Shuichi).
To end the Killing Game permanently and save everyone (partially succeeded).

Kokichi Ouma (Kokichi Oma in the English version) is the secondary antagonist-turned-anti-hero of Danganronpa V3: Killing Harmony. He is titled the Ultimate Supreme Leader.

After he successfully participated in the 53rd Killing Game, Kokichi's memories and past were fabricated by Team Danganronpa as follows:

Kokichi's past is very unclear due to his constant lying and the fact that he strictly refuses to reveal anything personal about himself. In fact, the only thing known about his life for sure is his love of video games and that he's been playing them his whole life. However, he has also claimed that nobody would care if he was gone, and it's been implied that he has no parents or family.

It's known that he is the leader of D.I.C.E., a small group of young pranksters, who are the most important people and like a family to him. They have traveled around the world and commit "laughable crimes" for fun, which could indicate that they could be a group of orphans with no families nor parents to hold them back. Kokichi is also good at stealing, which might be due to his past, and it has been pointed out that many of his skills have a resemblance to a petty thief. Furthermore, his organization could be a reference to the animated television series D.I.C.E. (DNA Integrated Cybernetic Enterprises), which is about an organization run by children, specifically orphans.

During the killing game, Kokichi lies that he is the supreme leader of a large, evil secret society. Obviously, there is no evidence of it and the Ultimate Detective, Shuichi Saihara, does not know any organization matching with the one Kokichi mentioned. During his Free Time Event with Shuichi, Kokichi claims he became the supreme leader by killing his parents and taking their place. He then claims he lied, and that the one he killed was his older brother. He claims he lied again and that the real reason is a secret. Considering his tendency to have some truth among his lies, this could imply something about his past.

There is a scene in the bonus mode Ultimate Talent Development Plan which hints about his family situation, as Kokichi and Kaito won't go home for New Year's, Kaito due to his unconventional family situation of living with his grandparents. Kaito asks Kokichi why he isn't at home with his parents (and aren't his parents embarrassed of him being such a brat at his age). Kokichi only tells him that he shouldn't ask such personal questions when talking to the supreme leader.

However, it is unclear how much, if any of Kokichi's past before participating in the 53rd Killing Game was real, and which was fabricated by Team Danganronpa.

He claims to be the mastermind of the Killing Game although it’s later revealed he was trying to deceive everyone to end the Killing Game. He is killed by Kaito Momota as of Chapter 5.

Described by Shuichi Saihara as "the human embodiment of a lie", Kokichi is a schemer who compulsively or pathologically creates lies and while putting on his villainous persona he freely states whatever he's thinking, regardless of how it makes others feel. He often says things in an attempt to pester the others, such as constantly teasing Keebo and Miu calling them nerds as well as Maki after he reveals her talent. Because of this, Kokichi is easily capable of manipulating the class trials, often leading the others into dead ends or in an attempt to intimidate the culprit.

After the conclusion of the fourth class trial, Kokichi grief for the now deceased Gonta accidentally letting his mask slip, only to reveal it as a lie soon after and state that he'd never cry for him reaffirm his villainous mask do the mastermind does not suspect him. From this point onward, Kokichi's mischevious and somewhat childlike demeanor is dropped, with Kokichi now acting cold, uncaring and nearly insane to cut his ties with everyone to peeper for his plan. He claims to enjoy the suffering and pain of others, with the Killing Game serving as a perfect source of it which is another lie and apart of his mask.

In spite of The antagonistic mask he he tries to put in , Kokichi does indeed show a compasionate side; albeit one that is rarely seen by the other students. During his private conversation with Kaito in Chapter 5, Kokichi expresses his true feelings towards the Killing Game, stating that those who are enjoying the students' suffering "piss him off" and that he had to "lie to himself" in order to get any enjoyment out of it. Kokichi considers lying to be a major part of who he is, believing lies to be just as - if not more - important than the truth. He also claims to use them as a way to entertain those around him.

Kokichi is capable of displaying empathy, but tries his best to make it seem twisted . He becomes upset when Himiko refuses to acknowledge her true feelings concerning her grief over Tenko and Angie's deaths, prompting her to finally face her emotions. He also appeared genuinely saddened by Kaede's execution, saying "[she] wasn't boring", which is a very high compliment from him. Conversely, he is uncaring about the majority of the students, treating their deaths as trivial or entertaining to keep up appearances .

Kokichi has a vendetta against killing, and as such hates the killing game. He also loathes Maki, possibly due to her occupation as an assassin. He openly mocks and antagonizes her at every opportunity, driving her to nearly strangle him multiple times. Kokichi often encourages the class to turn against Maki and tries over and over again to isolate her from everyone else, citing the fact that she has killed before and cannot be trusted. He is also willing to drag Kaito into their feud, insulting and harming the astronaut in order to enrage Maki and even using it as a key point in his last-ditch attempt to defeat Monokuma.

Kokichi's hatred of the killing game drives him to end it at any cost. He sacrifices both Gonta and Miu in an attempt to mercy-kill the entire class by having them vote incorrectly for the killer. These acts shatter any trust the class had for him and even lead Shuichi, who is usually very compassionate, to tell Kokichi he will always be alone. Later, the supreme leader finally reveals the secret of the outside world to the remaining students- that the world was actually destroyed and they are the soul survivors of humanity . Immediately after he declares himself the mastermind and hijacks the exisals to kidnap Kaito in an attempt to make everyone lose the will to continue the killing game. Unfortunately, the true mastermind gives everyone, save Kokichi and Kaito, a flashback light detailing their past as 'beacons of hope' while Kokichi was an evil 'Remnant of Despair'. This caused Maki to make an attempt on Kokichi's life, which he ultimately decided to sacrifice as a final attempt to end the game.

He appears to be extremely distrustful and paranoid of everyone around him, refusing to divulge information about himself. After his death, Shuichi and Maki visited his room where they discovered Kokichi had been hoarding evidence from previous trials and keeping track of murderers and victims. Notably, he wrote "trustworthy?" next to a portrait of Saihara, further demonstrating his distrust. His lying made it in turn, impossible for anyone else to trust him, and he opted for unethical and even cruel measures to get people to cooperate with him. When the Motive videos were given out, he suggested the class watch them together to prevent a murder, only for his idea to be shot down as everyone believed his goal was to incite a killing but in truth if this had happened a killing would have been less likely by separating people who had too much an to little to live for. He then manipulated Gonta into kidnapping everyone, allowing Kokichi to steal the videos and watch the videos, though he was unable to force anyone else to view them, which allows a murder to happen.

Kokichi is a young man with an innocent look and a rather refined face. He has a short stature, a thin build, and very pale skin. He has purple eyes and moderately long, wavy blackish purple hair, with the tips dyed a brighter purple. In the official art book, it is stated that he does not seem to care about his hair and the hairstyle is a result of him playing with it—however, he does sometimes make use of the shadows his bangs form to make himself look evil.[5]

He wears a white suit with multiple straps wrapped around his arms, and two straps hanging loosely around his legs. Apparently, his pants are made to look like a piece of punk fashion with bondage pelts, but they are actually just fake belts sewed to thicker part of the thighs. His shirt is ripped at the hem and the collar part of it is completely gone, and big parts of the uniform are fixed with metal clips. He has multi-colored buttons running down the middle of his shirt, with a few usually hidden under his scarf, and he has military badges on his right. His scarf has black and white spaces alternating exactly like a chessboard. He also wears two-colored black and purple slip flats, and as seen in the character design gallery, he appears to wear a white belt.

In his promotional art, he is shown with a dark flowing cloak and a leather peaked hat with a gold badge on top of it, giving him a more malicious look.

In the prologue, he wears the uniform of his original high school. He has the classical tsume-eri uniform on properly. His personally customized uniform has beauty from that of a university annex high school. Like with his other attire, the bottom of his trousers are short.[6]

As a big contrast to his other clothing, Kokichi's "trendy" underwear has much brighter and vibrant colors with red and yellow stripes. Apparently, he wishes to hide his playful heart and true fashion sense in a place no one can see.[5]

In the Japanese version, Kokichi's voice is usually slightly childish fitting his appearance, but it occasionally turns much deeper and mature, usually when he is either angry, foreboding or flirty. He similarly occasionally uses deeper voice in the English version, but it's less notable as his usual voice isn't as childish as the original. 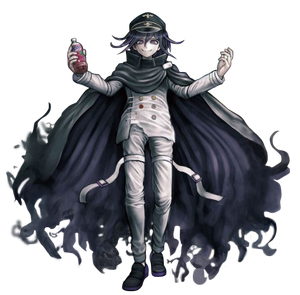 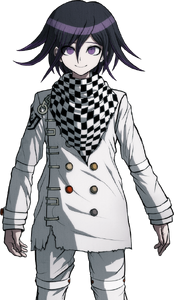 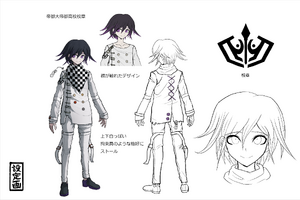 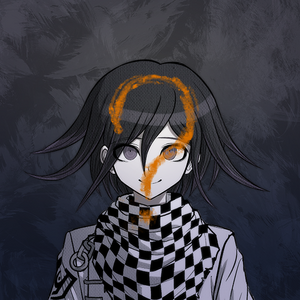 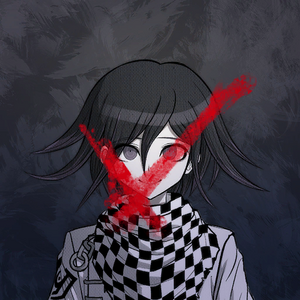 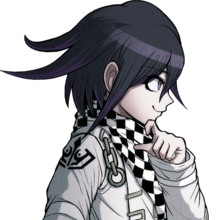