Foxfire, transform from human to fox at will

To teach Kohina to have better life

He is voiced by Daisuke Ono whose voiced Sebastian Michaelis, Shizuo Heiwajima, Erwin Smith in the Japanese Version.

Kokkuri has long white hair and white ears in his male and female forms. In the anime, he is shown to have golden olive eyes but in a colored version of the manga, he is shown to have blue eyes instead. In his spirit form, Kokkuri's fur is yellow in color. It is shown that he had dyed his fur blonde in order to be more colorful and cute.

He is protective and caring of Kohina; this is shown throughout the anime such as wanting Kohina to have more friends and taking care of her health. Also narcissistic - this is shown in episode seven when he was cursed and transformed into a woman. He tends to do all the house work, making him a clean freak. Kokkuri has also been shown to be sensitive about his age when he asked Kohina to "shut up" after she pestered him with questions regarding how old he actually is. Alongside this, Kokkuri is immensely sensitive to an unhealthy extent about his hair and fur, becoming a paranoid and stressed out mess when it comes to seasonal shedding and any possible signs in regards to his aging or fur falling out. 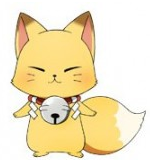 Retrieved from "https://hero.fandom.com/wiki/Kokkuri-san?oldid=1733865"
Community content is available under CC-BY-SA unless otherwise noted.