Collecting candy from around the world.

Kill Yuuki Terumi and free her mother, Konoe A. Mercury, from being brainwashed.

Kokonoe is a heroine from BlazBlue. She is a scientist at Sector Seven, as well as an important supporting character. In Continuum Shift, Kokonoe hosts her own omake series alongside Litchi's, called Help Me, Professor Kokonoe!. She is set to be a playable character in Chronophantasma's console version.

She is voiced by Chie Matsuura in the Japanese version, and by Julie Ann Taylor in the English version.

As Tager's and formerly Litchi's superior, Kokomoe is one of the top scientists at Sector Seven who pulled out Hakumen from the Boundary (though not "fully") and, when he flees, sends Tager to retrieve him. In the second game she's the one behind Lambda's "resurrection" and then commands her to do field work. In the third game she is the one behind Celica's "resurrection". She also makes Minerva and assigns her as Celica's custodian. Aside from that, she becomes more active in the story as she now goes out of her lab.

Kokonoe appears as a fairly young adult catgirl with a slim build. Her eyes are a golden-amber with visible bags under them, due to working overtime in her lab. She has pink hair which she keeps tied in a specialized style consisting of a long ponytail backing up longer tufts resembling large cat ears, which tend to overshadow her actual animal-like ears, which fade into white at the tip. Her attire consists of an altered, scientist version of the usual Kaka jacket with a white coloration. A hole at the lower base provides room for her twin, cat-like tails. She also wears a pair of small spectacles, and is never without her trademark lollipop.

Kokonoe is a rather serious and cynical woman with no regard for emotions, and always strives for Tager to complete his missions without fail. However, despite her seemingly constant spiteful nature, she tends to act very motherly towards her creations, and she sometimes goes a little over-the-top with the upgrades she does to them if she's in a good mood, which is somewhat rare. She wants revenge on Terumi for what he did to her family.

Her Drive, Graviton, lets her put a device on the arena that generates gravitational fields, that can either hold the opponent in place or repel them away, as well as controlling the direction which her fireball attacks go. Her Overdrive is Graviton Rage, which reduces the amount of Graviton gauge consumed from her drive attacks. Her Drive used to utilize a special gauge above her super meter, but this was changed to a stock system in Extend for balancing purposes. She now has a set number of Gravitons she can call out at one time. 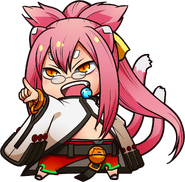 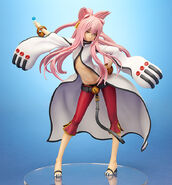