Member of the Woonkos tribe

Sebastian, The Governess, Gerard the Gormless

Animal
Kom is the son of an unnamed female monkey, the younger brother of Gavin, the boyfriend of Gina and the main protagonist of the 1999 film A Monkey's Tale (Le Château des singes (meaning The Castle of Monkeys) in French).

In the original French release, Kom is voiced by Tara Römer (speaking) and Stephane Peccoux (singing) whilst in the English version, he is voiced by Matt Hill (speaking), who also voiced Ed in Ed, Edd n Eddy, Tenderheart Bear in Care Bears: Adventures in Care-a-Lot and Soarin in My Little Pony: Friendship is Magic and Paul Holmes (singing) and in the German version by Daniel Brühl.

Kom is a teenage monkey who is a member of the Woonkos tribe, who live in trees. Kom lives in the tribe with his mother and older brother Gavin. Kom was always told by his tribe's elder Korcnak that below the trees lived demon monkeys. However, Kom did not believe this.

One day, Kom falls from the trees onto the ground below where he meets the "demon" monkeys, who are in fact the civilised Lankoo tribe and sees that they are similar to the Wookos tribe. He meets and befriends two Lankoo members; Gina, who works as a maid and Master Martin, a librarian, who teach Kom how to be a Lankoo. Kom manages to impress the Lankoo's king.

However, the evil chancellor Sebastian, along with his minions The Governess and Gerard the Gormless trick the King and his army into going into going across a frozen lake to reach the promise land. The ice melts resulting in the King and his army drowning, though Kom and a soldier named Lionel survive. The Governess also attempts to kill the King's daughter Princess Ida with poison.

After Ida begins to recover from the poison, Sebastian and Gerard attempt to escape, but are stopped by Kom and Lionel. After Sebastian and Gerard are imprisoned and the Governess is tricked into taking poison, which puts her into a deep sleep, Kom and Gina (now Kom's girlfriend) go to the Woonkos and it is clear that the tribe along with the Lankoos (now led by Ida) will unite.

Kom has a pale face with red hair and blue eyes. He has brown fur over most of his body except his chest and stomach, which have no fur. 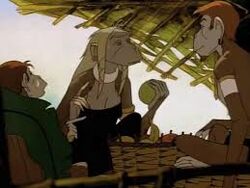 Kom with his brother Gavin and their mother. 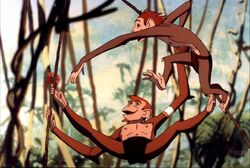 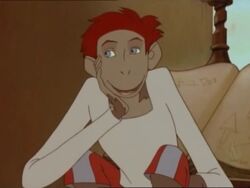 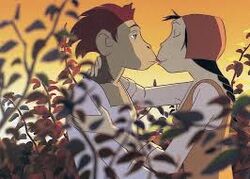 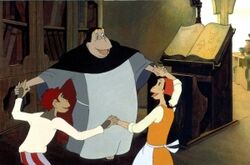 Kom with Gina and Master Martin.