Komasan (Japanese: コマさん Komasan) is a Rank D Fire-attribute Rare Yo-kai (as of Yo-kai Watch 2) of the Charming tribe. He is also the most popular Yokai even outbeating Jibanyan by a margin.

Komasan is a Komainu (though more closely resembling a shiba inu) with long, blue fiery eyebrows that look similar to Hitodama flames. He has ivory-colored fur with a light blue stomach, tail, and inner ears. His eyes are a lime green color and he has red swirls on his cheeks and hips. He carries a green backpack with white spirals wrapped around his shoulders, and a small, green sling pouch (from Yo-kai Watch 2 and beyond). This appearance is somewhat retained in his human disguise.

In his lightside counterpart, he's more of a regular White Dog. He has now two flames in his front paws, But he did retains his blue, fiery eyebrows, and his fiery tail, although it's shown to be bigger than his original appearence. His ears are the same shape as the original but the inside in each ear is dark purple. His eyes is always closed

His Shadowside form is more fierce than his Lightside form, resembling more of a Komainu from Japanese Myths. His eyes are open with red pupils with green scleras on each of his eyes as he has makeup on his Face. Red Swirls now appear in his chin and his legs. His fiery eyebrows & tail from his Lightside from have gotten stronger and he has grown a fiery blue mane. He also has a Red and Orange Coller.

Komasan is a sensitive and shy Yo-Kai. He doesn’t like being around crowds of people. In the anime, Komasan is quite childish and is easily distinguished from a city slicker. He often ends his sentences with "zura" (y'all in the english version), which is his way of saying "nice to meet you." He also uses the word "monge", a slang word meaning 'tremendous' ("Oh my swirls!" in the English version), when he's surprised or impressed. Due to this he seems to have traces of an Okayama dialect. Komasan is referred to as being a 'country bumpkin' and thus has highly limited knowledge of urban life. He tries his best to learn as much as he can to present himself as a good role model to his younger brother Komajiro. Komasan spends most of his time roaming the city in search of delicious food, particularly soft serve ice cream, as well as going on adventures with his brother.

In the Shadowside Series, Komasan is more of a quiet, calm Yo-kai unlike his original appearence. 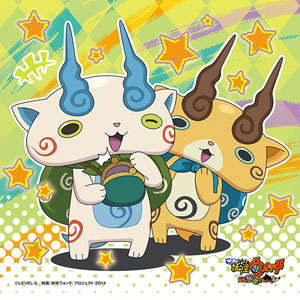 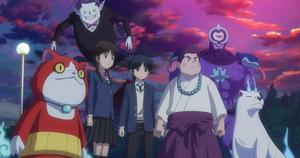 Retrieved from "https://hero.fandom.com/wiki/Komasan?oldid=1878082"
Community content is available under CC-BY-SA unless otherwise noted.