Leader of the Village Hidden in Rain

Former member of the Akatsuki

Konan is a supporting character in the manga and anime Naruto. She was the only kunoichi in the Akatsuki and the partner of Nagato, being the only member to call him by his real name. She became the leader of Amegakure after defecting from Akatsuki.

Konan has blue hair, gray eyes (amber in the anime), ultramarine eye shadow, and a labret piercing. Konan's eyelashes are shown to be a diagonal line at the bottom corner of her eyes, but in the anime, they are shown to be three distinctive lines. She has worn a large light blue paper flower in her hair since she was a child. Her facial expression is usually neutral, though usually protests or looks worried when Nagato performs a jutsu that would debilitate him. She wears the Akatsuki cloak and her Akatsuki ring on her right middle finger, the kanji on her ring means White. She wears orange nail polish. As a child, Konan was seen wearing an array of simple clothing. When living with Jiraiya, she is seen wearing a karate top and skirt bottom, with a pouch she wore at the front of her outfit to carry her paper. When Konan, Yahiko and Nagato began to make Akatsuki, Konan wears a black cloak with purple stockings and high-heels, as well as an mid section guard similar to that of Samui and an Amegakure headband, the only time period Konan's been seen wearing one.

Konan was a stoic, calm, and level-headed woman (much like her partner, Nagato).

During her childhood, she was a bright, compassionate and relatively cheerful little girl, in comparison to Yahiko's tough attitude and Nagato's sensitivity. However, the traumatic events since then have led her to become very serious, and she never spoke during Akatsuki meetings. Nevertheless, she has always placed the safety of her team-mates above her own.

She does seem to be more empathic than most other Akatsuki members, as she appears sad whenever she has been reminded of her past. She also expressed a great deal of loyalty and courtesy to Pain, doing his bidding without question, looking out for his well-being and always having complete faith in his abilities. She seemed to act as an intermediary between Pain and Amegakure, the villagers having given her the title "God's Angel", because with her paper wings activated, she resembles one.

She had the ability to read Pain's emotions without him facially expressing them, presumably as a result of having known him for so long. As soon as Madara Uchiha ordered Pain to capture the Nine-Tailed Demon Fox, she could tell right away that there was something about the order that very much upset her emotionally deadened partner.

After Nagato's sacrifice, Konan becomes fiercely adamant to protect Naruto Uzumaki, the person Nagato entrusted his mission of world peace to, even going as far as to proclaim all of Amegakure's loyalty to him. She was equally fierce in defending Nagato's remains from Madara going as far as to prepare herself for Kamikaze attacks against him if it meant protecting Nagato and Naruto from him. However, she was quickly killed by Madara's genjutsu and she died peacefully to be with Nagato, Yahiko, and Jiraiya.

When she was only a child, Konan's parents was killed during the Second Great Ninja War, and she was fend for herself.

Konan found Yahiko and the two worked together to survive before she found a dying Nagato and the three became best of friends. The three eventually encountered the three Sannin, who gave them some food. Konan impressed them by making an elaborate flower out of the paper wrappers left behind as a sign of gratitude. After Jiraiya taught them ninjutsu and was confident they could take care of themselves, he left them on their own.

Years later, Konan and her friends meet Obito Uchiha, posing as Madara Uchiha, and Zetsu soon after, with Yahiko getting her and Nagato away from the shady characters. Soon after, Yahiko and his friends formed the Akatsuki and became renowned for their strength and effectiveness, with news of their actions even reaching Jiraiya. Hanzo, the leader of Amegakure, feared that they would overthrow him and employed the services of the Hidden Leaf's Danzo Shimura to capture Konan and force Nagato to let her die or kill Yahiko. But Yahiko killed himself to save Nagato the guilt with the youth avenging his death as Pain. Since then, Konan remained by Nagato's side as they allied themselves with Obito, who later goes by the name Tobi. Because Pain made himself appear as a god to the Hidden Rain Village's residents, Konan was labeled by the villagers as an angel.

Like her fellow Akatsuki members, Konan attends their meetings yet says nothing during the meetings and sealing rituals. Eventually, learning that Jiraiya infiltrated the Hidden Rain Village, Konan confronted and battled him until Pain arrived to deal with their former mentor. Soon after, Konan accompanied Pain during his attack on the Hidden Leaf Village with order to spare no-one as she engaged Shino Aburame and his kin before falling back when Pain is about to devastate the village to her horror as it would effect Nagato's health. Remaining by Nagato's side for the duration of the attack, Konan stood by as Naruto confronts Nagato and was witnessed to the boy, a fellow student of Jiraiya, convincing them that there is still good in the world. Taking Nagato and Yahiko's corpses, Konan tells Naruto her time in the Akatsuki is over and the Hidden Rain Village will help Naruto achieve the peace she and her friends attempted to achieve.

With Nagato's death, Konan became the new leader of the Hidden Rain Village. But later, learning of Tobi sneaking into the village to obtain Nagato's Rinnegan eyes, Konan battles the manipulator to the point of attempting to a suicide attack that he manages to avert. But though Konan managed to surround Tobi with thousands of paper bombs, with the explosion lasting ten minutes to ensure he dies, the masked ninja escaped harm and stabs her with a pipe. He then subjects her to a genjutsu to force her into revealing the location of Nagato's resting place, with Konan dead by the time the genjutsu fades.

Konan is an S-rank kunoichi and her skills were held in high regard by her partner, Pain. She has an amazing natural talent for origami. As a child, after training with Jiraiya, she was able to form paper weapons infused with her chakra. Madara Uchiha highly underestimated her during their combat, leading him to lose his right arm and half of his mask in the process. She studied Madara's techniques and did countless simulations, which further demonstrates how experienced she is. Even Madara expressed surprise that he was forced to rely on the forbidden Izanagi to survive her final assault at the cost of his left eye.

Konan has shown a natural talent for origami, even developing it into her main ninjutsu. She has created a unique transformation technique called Dance of the Shikigami, which can turn her entire body and clothing into thousands of sheets of paper, which she can control at will and form into any shape or color. To travel long distances, she can fold them into butterflies or planes for powered flight, and to attack, she hardens the sheets and fold them into arrows and shuriken. She can also restrain opponents by blanketing them in sheets, thus restricting their movement and asphyxiating them. Befitting (and likely inspiring) her title as Angel the papers can also form large wings for further weaponry, though she is capable of hovering without them. Despite being made of paper, Jiraiya's Fire Release: Flame Bullet, which was empowered by oil, didn't even damage her.

The power of the paper attacks could even overpower a fire attack. Konan is susceptible to oil-based attacks, which stick to her and keep her paper from unfolding, although she is not hampered to the same extent by water, as shown when Pain had his summon use Water Release: Violent Bubble Wave on her to wash the oil off, as well as when she was fighting against Madara Uchiha in the rain. Konan can make Paper Clones that she could use to fight in her place. She could hide explosive tags in them so that they would explode, and catch an enemy off guard. Konan's ultimate jutsu is the Paper Person of God Technique, which can split a large lake. The technique contained six hundred billion explosive tags that would explode for a full ten minutes, which forced Madara Uchiha to use Izanagi to survive since his intangibility only lasts for five minutes.

Konan has been shown to be able to produce and fold enough paper to mimic environmental surroundings, allowing her and those of her choosing to hide in places one normally wouldn't be able to. Konan's favored origami form are flowers; she wears one in her hair, gives a bouquet to Naruto as a sign of peace, and covers the bodies of Yahiko and Nagato in them. As an adult, these paper flowers are dependent on Konan's chakra to maintain. As her chakra levels drop, the flowers lose their form and fall apart. 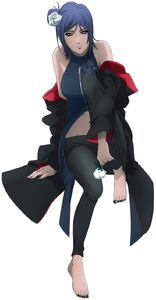 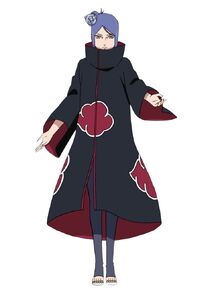 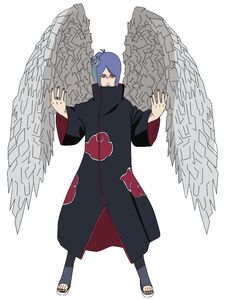 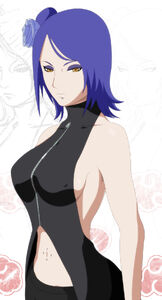 What Konan wears under her cloak 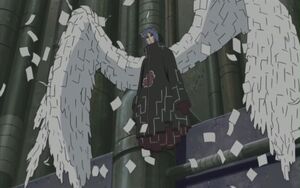 Konan's heart was hardened by the loss of Yahiko, Nagato's crippling and the betrayal of the Hanzo and the Hidden Rain 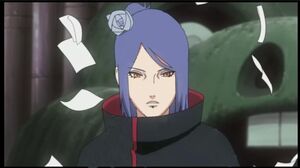 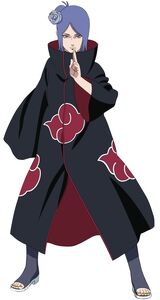 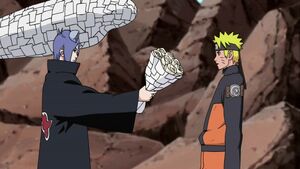 Konan makes peace with her fellow disciple of Jiraiya.