Tragic Exorcist, Strategist, Childhood Friend, Voice of Reason
Konekomaru Miwa is a supporting protagonist in the manga/anime series Blue Exorcist. He hails from Kyoto along with Ryuji Suguro and Renzo Shima, whom known since childhood, and is an Exwire of the True Cross Order, a student of the Exorcist Cram School, and the surviving head of the Miwa family.

Konekomaru has short, stubby hair and pale skin. Two of his defining traits are his red glasses and large ears. He is also one of the shortest characters in the series, with people like Rin Okumura and Ryuji Suguro towering over him. In fact, he is so small that the sleeves on the regular-sized school sports jacket are too long for him and must be rolled up or pushed back in order to keep them from covering his hands.

Konekomaru seems to be very protective of the people who raised him, and watches out for people who may try to hurt his friends and family. Konekomaru is also seen to be somewhat of a peace-maker as he is always trying to keep Ryuji Suguro from getting into fights. Sometime during his childhood, he grew a respected view of Ryuji Suguro and wishes not to hurt or upset him. Like Shima, he calls him "Bon" out of respect, despite how close the two of them are. He is also usually the one to reprimand Shima, though quietly, about his (Shima's) perverted habits.

Although he is polite and kind to everyone, Konekomaru holds a bitter hatred towards Satan due to him causing the death of his family. It gets to the point that he stopped liking Rin for a period after learning he was Satan's son, though he eventually got passed this and the two became friends again.

Konekomaru has also been show to have somewhat of a blunt side to his personality. When Shima proclaims "I will die" ( Ojo Shimasu) when told to cross the river of bugs with Shiemi's thighs around his head, Konekomaru merely replies that dying might purify him of his evil desires. Also, when Ryuji attempts to apologize for his actions during the forest mission, Konekomaru states that Ryuji's impudence endangers them all.

He is very loyal to Ryuji and Renzo, as they had grown up together at the same Temple in Kyoto. He is an orphan and the surviving head of the Miwa family. He plans to achieve the Meister in Aria. He is kind to everyone, but it takes a long time for him to reconcile with Rin after discovering his secret, despite seeing his true character.

In the anime, a crow demon took advantage of Konekomaru's fear of Rin and possessed him, before Rin is able to save Konekomaru.

Konekomaru is training to become an Aria, implying that he knows a good deal about scripture and Fatal Verses. He is able to perfectly recite the first ten books of the Gospel of John in battle. During the resurrection of the Impure King, he chants sutras to augment the flames in Shima's K'rik. In the anime, he is also shown to erect a barrier, along with Shima, against the flames of Satan.

He is able to work very well and create efficient strategies with little time and under a lot of pressure, as shown different times in the series.

He formulates the 'Konekomaru Formation' to carry the Peg Lantern back to their camp during the training camp. This plan makes use of the talents of each of the people present at the time and is created on the fly. It not only works out perfectly but also gets them back to camp before the sun rises on the first day. Also, during the anime filler, when the Demons are attacking the True Cross Branch, Konekomaru comes up with an idea of bringing sunlight from Vatican City to the Japan Branch via mirrors.

During their test in the Hall of Portraits, he demonstrates his capability as a leader. After pinpointing each of his teammates' weaknesses and fears, he manages to solve the puzzle of the "Family Portrait" leading to its defeat. Even before Rin slices up one of the portraits, he removes his glasses to avoid falling under an illusion of sorts, which turns out to be a right decision, demonstrating his intellectual perception. 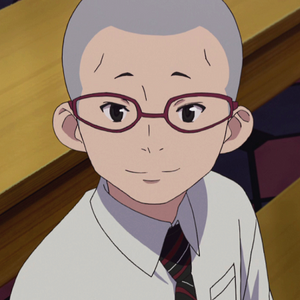 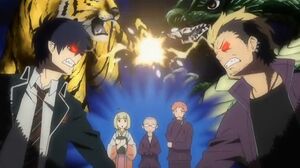 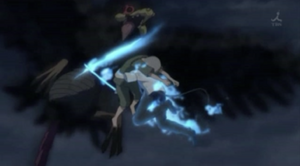 Retrieved from "https://hero.fandom.com/wiki/Konekomaru_Miwa?oldid=2162178"
Community content is available under CC-BY-SA unless otherwise noted.