No information
The Kong Family (also known as the Kong Klan or DK Krew) is the name of all of Donkey Kong's family and friends with the patriarch being his grandfather Cranky Kong.

Though they may share the Kong last name ("Kong" is actually akin to a species title rather than a surname like other Mario species including Toads (i.e. Yellow Toad and Blue Toad)), not all of them are biologically connected nor directly related via actual bloodlines/familial ties to one another, but instead the name is a sign of their union as a species, like clans and tribes; thus membership appears to be earned.

In conclusion, "Kong" is a species name, it's not a family name. They are always at odds with the evil Kremling Krew, who are always attempting to either steal their Banana Hoard or kidnap them. They also had confrontations with Wizpig, the Tiki Tak Tribe, and the Snowmads. In some games, they are playable or supporting characters 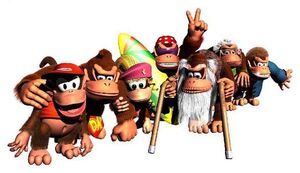 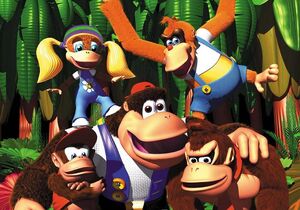