Kongou (金剛) is mighty warrior who is part of the Oboro Clan and a minor hero in the 2002 videogame Shinobi. He is a man who loves a good fight and he wields a shield that is as large as he is, which doubles as a shuriken with retractable blades.

He is a jonin ninja that is an Oboro member and he is skilled in hand-to-hand combat, and for some reason, he sees hs clan's new master Hotsuma as his potential, worthy adversary because of his far greater skills before he left.

A year later, He and the Oboro Clan were attacked and massacred by the Hellspawn that are summoned and sent by the clan's old enemy Hiruko Ubusuna who then brought them back to life his puppets. However because of his love for a good battle, going as far as to consider thanking Hiruko for allowing him to have the chance to fight Hotsuma (a fight he has wanted for some time).

Hiruko confronted Kongou on a rooftop within war-ravaged Tokyo after he kidnapped Kagari Ubusuna during their escape from the Hellspawn forces that were after them both. When defeated, he compliments Hotsuma on his strength, even jokingly saying that “it must run in the family” before succumbing to death. 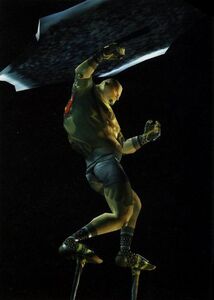 Kongou
Add a photo to this gallery
Retrieved from "https://hero.fandom.com/wiki/Kongou_(Shinobi)?oldid=1824597"
Community content is available under CC-BY-SA unless otherwise noted.