Alph: Engineer of the S.S. Drake

Alph, Brittany, and Captain Charlie are the three main protagonists of Pikmin 3. They are three citizens from the planet known as Koppai, who are sent to the Pikmin planet (nicknamed PNF-404) to receive seeds from the collected fruits from the alien planet due to the Koppaites consuming much more of their food supply. After an accident that results in the loss of the Cosmic Drive Key, the three must receive help from the Pikmin species to return back home and collect seeds.

Alph is the first character selected during a day on PNF-404. He is a small blue haired young man who resembles Olimar the most. Alph is an engineer and pilots the spaceship of the expedition, the S.S. Drake (named after Alph's grandfather). He respects both Brittany and Charlie and often refers Charlie as Captain.

Brittany is the only female of the group. She wears glasses and her suit color is Pink. She is from Koppaite's colonized moon, which also goes through the same food scarce as the main planet itself. As the botanist of the group, she studies the fruits that the group collect and writes short summaries based on the amount of juice, seeds, and taste of each fruit. While she finds the Captain a little "childish" for bringing his rubber ducky along, she refers Alph as Alphie, possibly hinting she might have an affection for him.

Charlie is the captain of the three explorers and Alph's childhood idol. He is the largest of the group, with a mustache and Mohawk, and his suit color is green. While he is brave and fearless (somewhat), he often acts quite childish and he brings his favorite rubber ducky alongside him during missions.

As the Drake approached PNF-404, an unknown error occurred, causing an explosion that sent the three explorers in opposite directions. Charlie wakes up in a snowy field and discovers Yellow Pikmin, but only for them to be ambushed by an unseen monster in a cave. Alph wakes up in the Tropical Wilds, and discovers Red Pikmin, gaining their trust after tossing them to free their Onion from a branch. Alph makes it to the landing site of the Drake, and receives a signal from Brittany to save her.

The next day, Alph and the Red Pikmin find Brittany stuck in a pot in the Garden of Hope, and free her from a glass wall with the help of the newly discovered Rock Pikmin he saves from the inside of a Medusal Slurker. Alph and Brittany discover a signal coming from a tree stump at the top of garden and believe it to be the Captain, only to be ambushed by an Armored Mawdad inside the stump. Using the combined strength of the Red and Rock Pikmin, the Mawdad is defeated, revealing a cell phone it spits out as the source of the signal, which the Pikmin then bring to the Drake for Alph to expand its capabilities.

The two then venture down to the Distant Tundra to track down the Captain. While landing, the Drake accidentally hits a tree stump, ejecting Brittany down a hole, where she discovers Yellow Pikmin inside a cave. Upon completing a bridge crossing a river between the Yellow Pikmin cave and the Drake, Alph and Brittany unite and continue on their way to find the Captain. They discover the nest of a Vehemoth Phosbat in the cave at the beginning of the game and defeat it using a light bulb to illuminate the cave with the help of the Yellow Pikmin. Charlie escapes from the Phosbat's mouth and happily reunites with Alph and Brittany, while also showing the two a Data File he found inside the beast, a person named Olimar has found the Drake's Cosmic Drive Key, and without it, the Drake will not be able to fly fast enough to escape from the planet's gravitation, leaving the Koppaites permanently stuck on PNF-404.

The next morning, the three discover another signal coming from the Tropical Wilds and immediately believe the source responsible is Olimar. Instead, they find another cell phone, but decide to retrieve it anyways to enhance the Drake's capabilities. Suddenly, a Sandbelching Meerslug appears and swallows the phone, but the Pikmin are able to defeat it by dropping Bomb-Rocks down its throat.

In a new area, the Twilight River, the group frees an Onion full of Winged Pikmin from an Arachnode web. When the Winged Pikmin lift up a stick dam to allow the group to travel down the river in lily-pads, the captains receive a message to their Koppad from a person who they presume to be Olimar, but the transmission is suddenly cut short. The group find a tall tree in the middle of the second area, and at the top they find "Olimar" taken hostage by a group of hungry Scornets. Upon defeating their leader, the Scornet Maestro, "Olimar" is brought to the Drake, where the group discover that his suit has sent him to sleep, so they are unable to question him about the Cosmic Drive Key.

The next morning, the group awaken from a sound of an explosion, and discover themselves in the Garden of Hope, and that "Olimar" has ran off with their juice. Discovering the Blue Pikmin on the way, the gang discover "Olimar's" signal coming from inside the Quaggled Mireclops, a massive beast responsible for crashing Olimar and Louie's ship. The Leaders and Pikmin are able to defeat the monster and retrieve "Olimar", their juice, and Charlie's rubber ducky.

The leaders discover the truth about Olimar from Louie, the man who they thought was Olimar, and his story of going to the Formidable Oak to find a golden substance on top of a towering structure, only to never return. The group arrive at the Formidable Oak and discover Olimar unconscious, being treated by a liquid-like humanoid. The Mysterious Life Form spots the trio and absorbs Olimar, but the Pikmin break him out of it. The Pikmin are unable to exit the tower through the top, so Brittany leads the Pikmin carrying Olimar away from the reformed Life Form, while Alph and Charlie make their way through the cave inside the tower. Once Olimar makes it out of the cave, the gang is ambushed by the Life Form, now solidified as the Plasm Wraith, and it absorbs up Olimar again and attacks.

After a long battle, the Plasm Wraith spits out Olimar and retreats back into the cave. In gratitude for rescuing him, Olimar gives the Koppaites their Cosmic Drive Key, allowing them to go back home with all the fruit they collected, and dropping off Olimar and Louie back at Hococate, all while the Pikmin sing and wave goodbye and the Plasm Wraith roars in anger from atop its tower. In the end, the trio learned the true meaning of teamwork and loyalty, and presume that the accident at the beginning was fate more than an actual error. 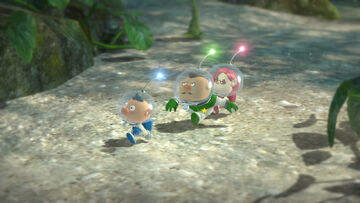 The Koppaites about to chase Louie to retrieve their seeds. 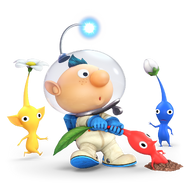 Alph, as he appears in Super Smash Bros. Ultimate.

Alph after the crash landing.

Alph reuniting with his lost Koppad.

Alph helping the Red Pikmin to salvage the Red Onion.

Alph and the Crew during the Scornet Maestro's battle intro.

Alph along with Olimar in SSB4.

Close up on Brittany during the game's ending cutscene.

Charlie after the crash landing. 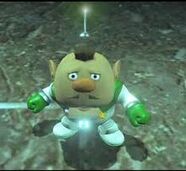