‘Gift’ his sister 100 girls {through murder)

Korekiyo Shinguji, also known as Kiyo, is a character featured in Danganronpa V3: Killing Harmony and a participant of the Killing School Semester.

His title is Ultimate Anthropologist. He has seen many places and people, and as a result, he has formed his pet theory of "humanity's unlimited beauty."

After he successfully participated in the 53rd Killing Game, Korekiyo's memories and past were fabricated by Team Danganronpa as follows:

According to Korekiyo, he had an older sister who meant the world to him and knew him better than anyone else. She always had terrible health, and ever since Korekiyo was young, she constantly had to go in and out of the hospital. Because of this, she was horribly lonely and never had any friends, so she spent a lot of time with her brother. When he was younger, Korekiyo got interested in cultural anthropology while reading a book with his sister. He was surprised to find out that different people around the world have had similar ideas that turned into popular stories. His sister told him that he should research it if he was curious about it, and that motivated him to become an anthropologist.

Korekiyo is a tall, slim student with rather pale skin and long ocean green hair. His hair is stated to follow an archaic image of beauty and it "puts his female colleagues to shame". He has narrowed yellow eyes, and his mouth is covered by a black mask, covering his mouth and neck, with a zipper where his mouth would be, giving him an unsettling and mysterious appearance. He wears the mask wherever he goes, no matter where he goes, and he even owns different masks for eating, showering, and other daily activities. When his mask is removed, it is revealed that he wears lipstick as the appearance of his tulpa that was based on his late sister.

He wears a dark green military-style uniform with knee-high black boots, a zipper lining the front and two straps over it. The uniform consists of a white button-up underneath it, a dark green button-up, a red armband around his left arm from his previous school, Sunset Hills High School, a green military regulation cap with his former school's insignia on the top, and a decorative chain dangling from it. In his Free Time events, he states that his sister tailored his uniform for him while she was sick. He wears what appears to be some kind of silver locket around his neck. Both of his hands are completely covered in bandages, although it's likely he's not even injured and that this is actually related to sorcery.[5]

In the prologue, he wears the uniform of his original high school. He dons a black, unbuttoned blazer with golden cuffs and a grey knitted vest with a v-neck. He doesn't wear a hat like in his anthropologist uniform, and his hands are completely uncovered. He wears grey slacks and brown school shoes. He still wears a face mask, although lacking its zipper.[6]

Korekiyo is an aloof and somewhat creepy person, but he is also very cool-headed and intelligent. He has the experience of having met to a huge variety of human beings for his cultural anthropology research and because of that, he can keep himself composed even under the confinement circumstances and believes in facing things with calm and rational approach rather than an emotional one. He has a vast knowledge of different cultures and ponders different subjects in deep and complex manner, with him occasionally starting lengthy anthropology speeches even though nobody asked. He is greatly interested in topics he does not necessarily agree with as well, as he states he does not believe in any gods, but he finds them interesting from the point of view of studying the human nature and cultures. However, he does believe in ghosts and souls, and has a strong interest in communication with the dead and death in general.

Thanks to all of his knowledge, he has formed a pet theory of "humanity's unlimited beauty" and he has a deep interest in it. He believes all human beings are great, and that even their ugly sides are extremely beautiful and beauty can be created from hardship. During the Killing Game, he observes other students with great interest in seeing what kind of beauty they will display as humans under such circumstances, seemingly not caring about their safety. It has been stated that Korekiyo is so interested in anthropology that it sometimes seems like he is not as interested in the currently living people. His morals are stated to be a bit off and he can say unsettling things rather openly, like randomly mentioning that Gonta could use his immense strength to crush a child's skull easily. In Chapter 1, he openly states he has no problem with killing and wonders why the others do, stating that killing is perceived as wrong only because of laws made by humans and such laws do not exist in the Killing Game. He is aware that his appearance and behavior cause him to come across as a potential murderer, but he does not appear to care what other people think of him. He claims the others should not fear him as a potential murderer, as he merely wishes to observe.

Korekiyo usually speaks in calm and polite manner, but he nevertheless comes across rather off and makes others uncomfortable due to his strange and sometimes morbid thinking. While he is most of the time very collected, with his voice staying the same tone, he occasionally gets very excited about some topics and his voice turns notably more high-pitched. He also tends to stay calmer than the others during bad situations, as for him it's an opportunity to observe, though even his spirit begins to break during the Death Road of Despair and Gonta's Insect Meet and Greet. In Chapter 3, there is also a moment when his tone changes to more a panicky one when Kokichi touches his ancient katana without permission and he fears it might get damaged. He then disturbingly threatens to tear out all of Kokichi's nerves in anger, though his voice still remains creepily calm. In general, he tends to find noisy and vulgar people annoying, often asking them to be quiet. Furthermore, he also has a unique and somewhat creepy laugh, which sounds like "kehehehe". In the original Japanese, "kukuku" is his unique laugh's sound.

As another strange trait, he is quite fixated on keeping his mask on. During his Free Time Events, he claims he has a different mask for different activities, like eating, bathing, sleeping and exercising. However, they all appear exactly the same and do not seem to have any kind of hole in them, yet he is somehow capable of eating and drinking. According to Korekiyo, he takes his mask off only in front of people his sister deems trustworthy. He occasionally speaks on behalf of his sister, for example, by telling someone that his sister is pleased with them or that she doesn't trust them yet. The other students either do not understand what he is talking about or do not notice it. It's later revealed that his older sister is actually deceased and that he is a serial killer whose goal is to kill a hundred women he considers "pure", believing that they will become "admirable friends" for his sister in the afterlife. After suffering from traumatic torture and a near-death experience in the past, he developed a female split personality, or tulpa, based on his sister, which serves as a coping mechanism against feelings of exceptional distress. While normally very calm, stress can cause him to have a panic attack, rendering him hyperventilating and unable to talk properly. The sister persona acts reassuring towards him, but also gives orders which Korekiyo seems to obey without any questions. The persona also seems to dislike other people in passive-aggressive and condescending manner, referring to the other students as "ignorant children" and "such a sorry lot".

Korekiyo is obsessed with his sister and claims to be deeply in love with her, with her appearing to be the only person he truly cares about, and many of his mannerisms like his hair and clothing being inspired by her. He is also noted to wake up two hours before the morning announcement and spends an entire hour getting carefully dressed with no hurry. Because of these traits, he is perceived as very effeminate by the other students, and is occasionally mocked by Kaito. Korekiyo even claims that he and his sister were in an incestuous relationship, and because of this he only kills women, as he jealously refuses to let other men close to her even if he deems them good people. In his Love Suite event, it's implied that he is willing to have physical relationships with other people "out of curiosity", even if it's not consensual, but he states he would never love them as he considers his sister his only true love. Unlike most students in the series, he apparently has lots of experience with sexual relationships, as he has described himself as being very popular with local women in a village which commonly practiced bondage. He is sadomasochistic, enjoying the pain of others because he considers the raw emotions beautiful, and enjoying his own suffering because he believes it makes him closely connected to his deceased sister. However, he is also shown to be very romantic and strongly believes in the "power of love", which can make even the impossible possible. He is very fond of romance and love stories, especially ones centered around forbidden love. Even though he is apparently willing to have strictly physical relationships with other people, during the bonus mode Love Across the Universe he refuses to look at pornography, because he has "already given his heart to someone".

After he is revealed to be the culprit during the third trial, Korekiyo feels no guilt for his terrible actions and he seems to genuinely and unironically consider the other students his friends, not seeing any contradictions between this and his own actions. This is yet another trait that indicates that he is unable to truly understand and care about how other people feel, though he is also quite skilled at noticing other people's intentions and emotions due to keenly observing other people for years. He panicked at first, but slightly hesitantly calmed down after his sister ordered him and told him that he should accept his defeat. In the end, he does not even seem to mind his own death that much, as it's a way for him to finally reunite with his sister. Among his last words, he mentions that death is never acceptable for humans and the living must find find a reason to accept it whenever it happens, no matter how forced, explaining why so many cultures have funeral rituals and rumors about resurrecting the dead. He says that he came to the conclusion that the way you come to terms with death also determines how you live, all of this indicating that he is in some ways aware that all he has done is just a coping mechanism against his sister's death. He promises to look over his "friends" as a ghost, and creepily states that he'll be watching how they will face the deaths of their friends. Though at first content with his execution, as he believes he will be with his sister once again, he is lastly seen reacting and screaming with utter horror and disbelief as both his sister and Monokuma banish his spirit to the afterlife. 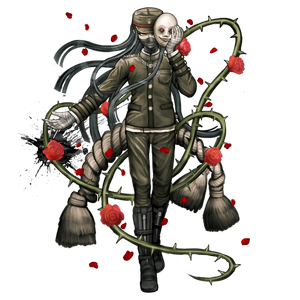 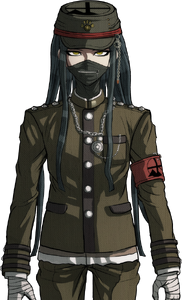 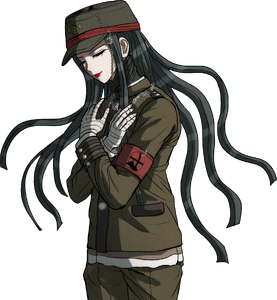 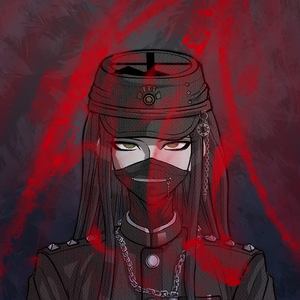 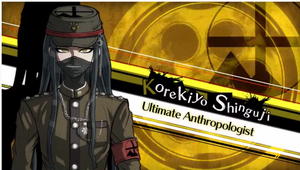