Gladiator of Sakaar (formerly)
Founder and Leader of the Sakaaran Rebellion (formerly)
Ally of the Avengers (formerly, team disbanded)
Guardians of the Galaxy Member (formerly)

Korg is a major character in Thor: Ragnarok, a supporting character in Avengers: Endgame and one of the two tritagonists of Thor: Love and Thunder (alongside Valkyrie).

He is a Kronan gladiator who resided on Sakaar and led a rebellion against Grandmaster, and stole the Statesman (one of the Grandmaster's spaceships) along with Loki and the rest of his rebellion and joined Thor on his trip to Earth after the destruction of Asgard. After Thanos wiped out half of the universe, Korg assisted his allies in fighting against the 2014 version of the titan in the battle of Earth.

He is portrayed by the film's director Taika Waititi, who also did the motion capture for Hulk, Surtur and Hajo in Thor: Ragnarok.

Korg attempted to star a rebellion against the Grandmaster, but due to him not printing enough pamphlets, he failed to do so. The only people to come were his mother and her boyfriend, whom he hated. Afterward, he was forced to become one of the Grandmaster's champions, and befriended Miek, another gladiator.

He meets Thor on Sakaar along with his friend Miek, Korg makes a joke about rock-paper-scissors after meeting Thor when he watches Thor and Hulk he is frightened and reminded of his old (and dead) friend, Doug's battle.

later in the film, Valkyrie recruits Korg and he leads a rebellion to escape Sakaar, while walking to steal a spaceship, he encounters Loki on the floor (Thor had electrocuted him) and Loki joins the Rebellion and they steal the Statesman (one of the Grandmaster's spaceships) and goes to Asgard and they got all off the spaceship and they fight the beserkers at the end of the climax, they all go on the Statesman as Asgard is destroyed by Surtur and Hela is killed, Korg then joins Thor on his way to earth. While they are traveling to Earth, they are stopped by Thanos and the Black Order, and attacked Korg and the others.

Korg was one of the survivors of Thanos's attack in Infinity War and escaped to Earth with the rest of the survivors and established New Asgard. In Avengers: Endgame , Korg is revealed to have survived the decimation, and now lives at New Asgard, and mostly spends his time playing Fortnite with Miek and Thor. Korg would meet his ally Hulk in 2023 when he came to get Thor for the time heist.

Korg was one of the heroes who participated in the battle of Earth fighting Thanos and his forces. Korg survived the battle and attended the funeral for Tony Stark afterward. It is unknown what happened to him after, but he most likely kept living in New Asgard playing with Miek.

Korg is shown to be very friendly and nice even to complete strangers like Thor and Loki. He is also quite jokey. He appears to dislike ghosts, given his reaction to Loki's hologram. 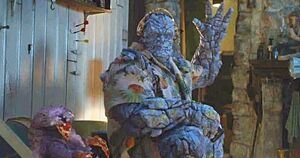 Korg alongside the Asgardians and other heroes against Thanos and his forces.