Kota Izumi is a minor character in the 2014 Japanese superhero manga series My Hero Academia and its 2016 anime television series adaptation of the same name.

Kota was the only son of a pair of professional heroes that were collectively known as Water Hose. Although the family was happy, Water Hose were both killed in action by a sadistic A-Rank Villain named Muscular when Kota was only three years old. With his parents dead, Izumi was taken in by his second cousin Shino Sosaki a.k.a. Mandalay, who operated as part of a hero team called the Wild, Wild Pussycats.

In the years to come, Kota garnered an intense disdain for both heroes and villains, as he thought both concepts were partially responsible for the deaths of his parents. Ultimately, his way of thinking was changed when he was five years old. Muscular reappeared and tried to kill Kota, however an aspiring hero named Izuku Midoriya risked his life to protect Izumi from the monstrous threat. Thanks to his determination and strength, Midoriya was able to miraculously claim victory over Muscular. It was then that, having had his life saved, Kota grew to learn the value of heroes.

Kota is voiced by Michiru Yamazaki in the Japanese version of the anime and by Cassandra Lee Morris in the English version. Morris has also voiced Nero Claudius in the Fate franchise, Leafa in Sword Art Online, Morgana in Persona 5, Anastasia Hoshin in Re:Zero − Starting Life in Another World, and Taiga Aisaka in Toradora!. 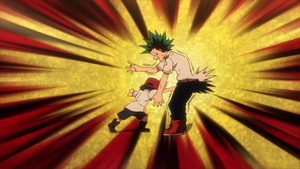 Izumi punching Izuku Midoriya in the scrotum for trying to talk to him.