Ha-chan is a baby-like fairy who appears Mahou Tsukai Pretty Cure!. She comes from the Linkle Smartbook and it is a mystery as to why she comes from it. Her alter ego is Cure Felice, the final form that Ha-chan transforms into. As a young girl, Ha-chan goes by the name, Hanami Kotoha.

She is voiced by Saori Hayami.

Ha-chan is shown to have abilities to use with the Linkle Smartbook and is able to power the Cures' attacks. For example, she uses the book to allow Sapphire Smartish to power up and defeat Sparda in episode 16.

As a baby, Ha-chan has short pink hair with a little light pink flower, that has a green leaf coming from its back, on top of her head. Her eye color is turquoise with pink flower assents. She wears a light turquoise baby outfit with a dark pink brooch in the center that has four green leaves coming from the brooch. The turquoise outfit has a little green gem attached to it from the back.

Much like when she was a baby, Ha-chan as a toddler has pink hair with a light pink flower tie, that instead, has two green leaves coming from its back, but the flower ties part of her hair in a small ponytail that sticks up. Her light turquoise outfit is the same but is a dress with a frilly hem and she wears turquoise colored shoes. She has small round pale turquoise colored wings on her back.

As a young girl now, Ha-chan's pink hair becomes twin tails and she wears three big light pink flowers on her head. Her outfit is a turquoise colored cardigan with puffy sleeves and a round white trim in the middle of both sides of the cardigan. The cardigan is tied together by three big pink flowers on her chest and she wears a turquoise shirt underneath the cardigan. Her skirt consists of light green flower petals and her shoes are turquoise with a white flower brooch and green leaves on front of the shoes. She has sharp pale turquoise colored wings on her back.

As an older girl, Ha-chan grows to about the same height as Mirai and Riko. Her hair grows to her shoulders and she wears a green headband with a white flower on each side. Her outfit is a dress with a turquoise top with white sleeves and a white skirt with pink hearts surrounding the bottom and two light green vines with pink flowers hanging on each side. The top is tied together with three pink flowers and a pink ribbon. Her shoes are boots with the toes turned up and a green leaf-like design and white flowers on the top. She also wears a bracelet with a white flower around each wrist. Her turquoise wings become bigger.

As Cure Felice, she becomes the same height as Cure Miracle and Cure Magical. Her hair becomes light pink and is styled in long braided pigtails with strands hanging from each side. There are two green clips on each side of her head with light turquoise ruffles sticking out. The right one has a flower while the left has a yellow butterfly. On the strands in the front, there is a white flower along the top and a yellow butterfly at the end of each one. The ends of the pigtails have white flowers on the end as well. Along her head is a gold tiara. Her top is light green with a huge pink rose with a dark green stem and leaves in the front. The sleeves are cream-colored and reach her elbows. The skirt is turquoise with a sheer pink layer over it decorated with pink and orange flowers. There are thick green bracelets around each wrist with a rose ring on the middle finger. She also wears turquoise high-heeled shoes with green ribbons around each leg with a white flower on top of the knee. There are small turquoise wings on her back. The Linkle Smartbook appears to be on the left side of her hip.

Ha-chan was just born after the Pretty Cure's battle with Gamettsu in episode 4. Ha-chan was born out of a flower into Mirai's hands.

Cure Felice (キュアフェリーチェ Kyua Ferīche) is the Pretty Cure alter ego of Ha-chan. She controls the power of life, she is represented by the flower and transforms with the phrase, "Felice Fun Fun Cure Faure". Her main attack is Emerald Linkcarnation, which she can only perform if she has her weapon, Flower Echo Wand.

Hanami (花海): Hana (花) means 'flower' which is probably a reference to the flower like theme she has going on. Mi(海) means 'sea'.

Kotoha (ことは) means 'word' or 'spell' which is probably a reference to how witches use spells to cast magic.

Ha means "leaf" while "-chan" is a suffix used commonly for females.

Ha-chan being fed by Riko 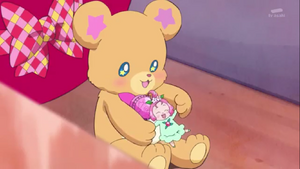 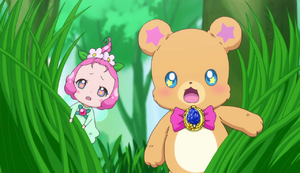 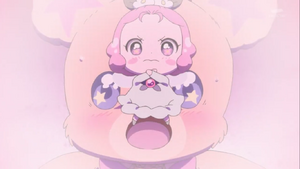 Rajin Ha-chan on a rain cloud

Ha-chan in her final stage 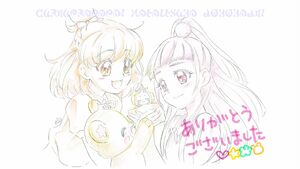 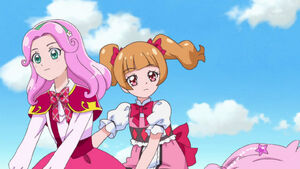