Project the people from ghouls.

Destroy all ghouls. (before as a human, both formerly)
Find out the Eyepatch's identity.
Find out Kaneki's motivations and make amends with him.
Help Kaneki change the world into a better place where humans and ghouls can live peacefully.
Be with Akira. (all succeeded)

Law Enforcer
Amon Koutarou is the tritagonist of the Tokyo Ghoul series. He is a former A first class police investigator who investigates Ghouls, also known as a Dove. He comes to the 20th ward with his mentor, Mado Kureo, to investigate Ghoul incidents in the area. He has a strong sense of justice, fervently believing it is the right and moral thing to do to exterminate the Ghouls. He hunts the Ghouls in order to prevent more human children from becoming orphaned like himself, and he often works after hours to achieve his goals.

Due to a personal experience as an orphan during his childhood, Amon has come to the conclusion that this world is wrong, so he has made it his task to change the world. Because he thinks it's the ghouls that are twisting the world, he views the eradication of all ghouls as a way to mend this world. After being spared by Ken Kaneki, Amon has started to question the righteousness of his crusade.

He has a certain interest in the two ghouls Rabbit and Eyepatch.

He wields a "Quinque" (a weapon made from the "Kagune" of a Ghoul) that has the appearance of a pole-arm with a large cylindrical bludgeon at the end.

During the Rushima Landing Operation, he revealed to be alive as a one-eye Ghoul

Amon is a tall man with black hair and teal eyes. Due to his constant, vigorous training, he has an extremely athletic and muscular build.

Like most ghoul investigators, Amon usually wears a black suit with tie. If he leaves for an investigaton, he additionally wears a white overcoat on top of his suit. He also wears a necklace with a cross.

Amon is a likeable man with a great sense of justice and dedicated to his cause. It appears that his hatred for ghouls came when his adoptive father, Donato Porpora, was exposed of his crimes. This incident led Amon to believe that ghouls made the world wrong and that hunting ghouls would be the first and only step towards making it right.

He feels responsible for the death of his partner, Kureo Mado.

After his fight with Kaneki, he has shown interest and curiosity by wanting to understand him, however their future encounters ended up with both of them fighting one another.

Donato was his ghoul adoptive father and they lived together in a Catholic orphanage. But one day, Amon discovered that Donato had been slaughtering the children in the orphanage daily, which made Amon grow a sense of hatred toward him. Since then he has cut his ties with him, and refuses to recognize him as his adoptive family. When defeated by Kaneki, Amon is frustrated over how he remembers Donato as his father, thinking why it was him even in a moment like that.

Mado was Amon's first partner and a mentor in Amon's eyes. He respected him greatly and learned a lot from him. When Mado was killed, he underwent a phase of great sorrow and promised to catch Rabbit, the ghoul who killed him. Amon still feels responsible for arriving too late to save his mentor, as he reveals to Akira when she is drunk.

Amon's second partner/first subordinate. They met for the first time in the cemetery where both had gone to pay their respect to Kureo's grave. At first, their relationship was strained because Akira held Amon responsible for her father's death. After a several ghoul incidents, and a time wherein Akira had gotten drunk, their bond grew closer and they started to work well together. Before the battle against Anteiku, Amon offered her a cat strap because it reminded him of her cat, and they went together to see Kureo's grave one more time, Amon asking her not to be rash in the future battle against Anteiku. Akira may have romantic feelings toward Amon as she tried to kiss him once, which he stopped. It is then showed that the two are in completely different teams during the battle against Anteiku. She ends up confessing later in the manga that she does in fact have feelings for him and her old school rival.

Shinohara was Amon's teacher in the CCG academy, and Amon respects him a great deal. Just like Mado, Shinohara is like a mentor for him, and when Ken Kaneki hurt him in Kanou's laboratory, Amon became enraged and immediately went to fight Ken.

Amon considered Suzuya to be quite weird and was angered by his carefree attitude and how he was uncaring of Shinohara's injuries, but later started to get along, though Amon said that he still doesn't understand the way Suzuya sees the world.

Takizawa and Amon are on great terms, Takizawa admiring Amon a lot. However, since Seidou's not getting along that well with Juuzou or Akira, Amon often has to play the conciliator. Amon respects him as a true comrade and flew into a distraught rage when Takizawa was seriously injured by Tatara and Noro.

At first Amon thought Kaneki was just a regular ghoul. However after being spared by Kaneki after their first confrontation, Amon begins to gain interest in Kaneki as to why he was spared and what his motivations are. Once Amon concluded that Kaneki and Rabbit were the key to solving Mado's death, he began pursuing Kaneki in search of answers. Amon was responsible for stopping Kaneki's rampage when he was raiding Kanou's Lab. Kaneki is the only ghoul that Amon does not seem to have any real hatred or scorn for, although he has a lot of questions that he wanted to ask him. After fighting Kaneki during the Anteiku Raid, Amon lost his arm. Even after being severely wounded by Kaneki's kakuja, Amon persists to stay alive in order to prevent Kaneki from becoming a murderer.

Amon's old friend, his first Quinque (Doujima 1/2), is a memento left by Harima. He still remembers her fondly.

As Arima is the strongest Investigator, Amon has respect and admiration for him.

Because Amon is extremely athletic, he is able to fend off ghouls to some extent even if he doesn't use his quinque, and may be able to deal with weak ghouls without using the quinque at all. As a dedicated, disciplined ghoul slayer, he always trains extensively in weight lifting to match against ghouls who are naturally stronger than average humans. This strength allows him to wield heavy Koukaku quinque. 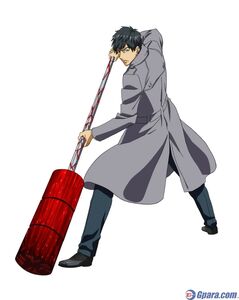 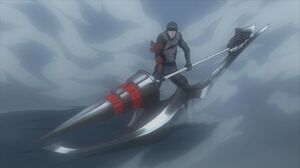 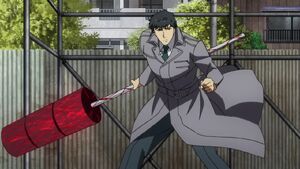 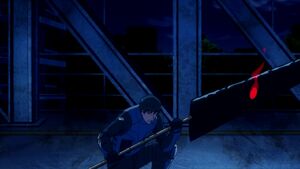 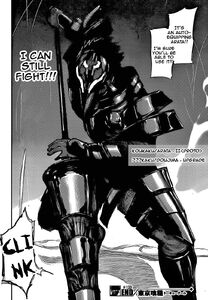 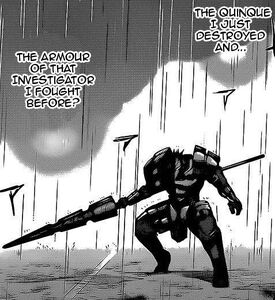 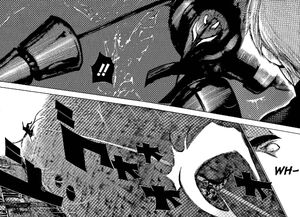 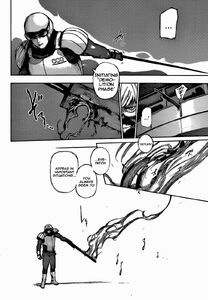 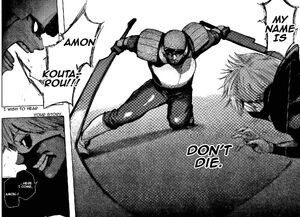 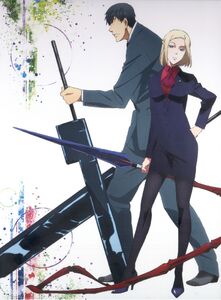