Heroes Wiki
Register
Don't have an account?
Sign In
Advertisement
in: One Piece Heroes, Tragic, Strong-Willed,
and 27 more

Leader of the Kozuki Clan
Shogun of Wano Country

To become Shogun of Wano.

Kozuki Momonosuke is one of the characters in One Piece.

He is a young samurai from Wano Country. However, ruled by Kaido and Orochi, Momonosuke and his father's three retainers traveled to 20 years in the future to overthrow Kaido and Orochi after his parents' death. During the final battle, he turned to 28 years old by Shinobu.

After Kaido and Orochi's downfalls, Momonosuke has officially become the new shogun of Wano Country to rebuild his homeland to its former glory.

He is voiced by Ai Orikasa in the Japanese version, and by Corinne Sudberg in the English version.

For samurai's moral code, Momonosuke initially refused to eat, but found Sanji's food to be delicious to restore energy.

Momonosuke is also perverted for his lust for beautiful women. He was lucky to bathe with women and sleeping with them when with Nami and Robin.

His dream is to become Wano Country's Shogun. After Kaido and Orochi's downfalls, Momonosuke's dream has became true as he announced as a new Shogun.

He is spoiled bratty when anyone insulted him such as Luffy. He told Yamato to stop placing a plate on his head which shown he looks just like his father, Oden.

He hates get kicked by his sister, Hiyori's dropkick even they grew up.

Momonosuke cares for his subjects in Wano Country as the prisoners of Udon felt thankful for his survival after becoming the new Shogun of Wano. Momonosuke declared everyone he need them to use their strength to rebuild Wano Country as the paradise that used to be many years ago under his grandfather Kozuki Sukiyaki. He declared to his people they will abolish the toxic factories and slaveries in Wano Country now that Kaido and Orochi are gone as well, no longer charging for clean water in the well.

As the current head of the Kozuki Clan, Momonosuke has the authority of his father's retainers. Due to his mother's initial time travel ability, Momonosuke doesn't age a single year, leaving him ageless at the appearance of age 8 until Shinobu used her devil fruit powers to age him into a 28 year's old man.

As the current Shogun, Momonosuke has full control over Wano Country. He officially terminated the well for clean water in order to demolish the toxic factories and cease slaveries for good.

Momonosuke accidentally ate a failed artificial devil fruit to turn him into a pink eastern dragon. 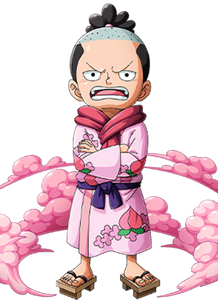 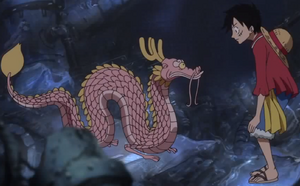 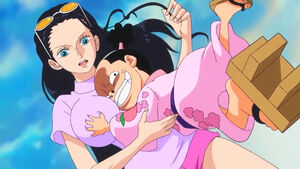 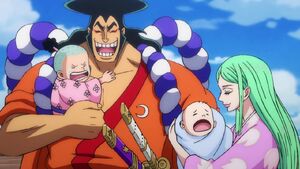 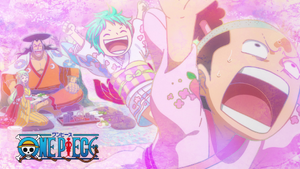 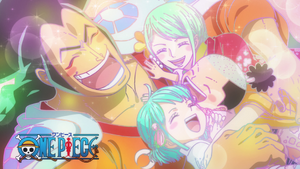