Kratos, also known as Ghost of Sparta and Fárbauti (by Jötnar), is a Spartan warrior that would become the slayer of Gods and the main protagonist of the God of War video game series. Though he eventually transforms into a more villainous character as his thirst for vengeance consumes him and causes him to destroy the world, initially Kratos is more of a gray character, acting as a sort of anti-hero who fights against corrupt gods and their forces but in a very brutal and violent manner. In the fourth game, Kratos sees the errors on his way and becomes a much wiser character who now raises his son Atreus and ensures that he will become better god than either him or corrupt gods that wronged him, and now only attacks in self-defense.

He was voiced by Terrence C. Carson until God Of War III, was voiced as child in GOW: Ghost of Sparta by Antony Del Rio, and is currently being voiced by Christopher Judge as of God of War 2018 (IV). Carson also voiced Mace Windu in many video games, as Judge also famously played Teal'c in the Stargate series.

Kratos is destructive, fierce, and brutal, focusing mainly on his own goals, and turning what guilt he has into anger. Whenever he is wronged, he becomes obsessed with revenge and will destroy who or whatever he has to so as to get his vengeance. At first, Kratos wanted revenge on Ares for the war god making him kill his family, then Zeus for trying to kill him, and finally, his vendetta extends to all the gods. He tends to blame others for his actions, such as Ares or Zeus, until the end, when Kratos accepted the consequences of what he'd done and killed himself with the Blade of Olympus. He has even contemplated killing himself at some points out of his inability to cope with the constant memories of his crimes. But for all his faults, Kratos truly loved his family, the only time he is happy being when he got to see Calliope again. He also cared about Deimos and his mother, Callisto, regretted killing Athena and came to care about Pandora, like she was his daughter.

After destroying Olympus, remarrying, and siring another child, Atreus, in Norway, Kratos becomes a more stoic character, only bursting out in anger when antagonized or threatened. Although he is sometimes prone to outbursts when disciplining his son, he almost always manages to regain control of himself before doing any damage. He also accepts full responsibility for his actions in Greece, often exhibiting extreme sadness and regret, and at times even falling into a state of depression, when confronted about his past behavior, he now also dreads being called the "Ghost of Sparta", angrily telling Mimir not to call him that. He is also more considerate to others' feelings as well, as he sternly reproaches Atreus when the latter asking Sindri the reason of Brok's blue skin while he himself doesn't. As a result of his drastic maturity, Kratos is shameful of his past and prefers to keep it a secret from his son. However, he eventually realizes being open to Atreus with his mistakes would allow Atreus to learn from Kratos' mistakes and not go down the dark path he himself once trodden.

Following his union with Faye, Kratos went to great lengths to cover up his past as a God, especially from Atreus. Believing that his son’s godhood was a curse, Kratos kept the truth hidden with hopes that Atreus would live a normal life, though his secrecy became the source of his son’s recurring illness.

Unfortunately for Kratos, Atreus despite his compassionate nature appears to have inherited his father's impulsiveness and tendency towards rage. He is alarmed at Atreus' outbursts and is quick to reprimand him for it, fearing that he will become the same monster as Zeus was in Greece. He is shown to love Atreus just as he loved Calliope, Lysandra, and most likely Faye. Telling his son that they would complete the journey together. Kratos's relationship with Faye is not well-known but it is apparent that they had a very close and loving relationship, as Kratos openly acknowledges that Faye was better than a God and wondered if he could raise his son without her. He also respected Faye's wishes of not taking Atreus hunting, resulting in Kratos being gone most of the time hunting for the family.

However, his distrust for divine beings remains intact, opting to avoid interaction with the Norse Gods whenever possible, even when they (like Freya) try to befriend and help him. He is also shown to still harbor resentment towards the gods of Olympus, promptly telling the spirit of Athena to leave his head the moment she appears. He likewise reassures her that, while he is still a monster, he is no longer her monster. Despite this, Kratos is shown to have become more reasonable in dealing with the Norse Gods, as he was able to come to trust and care for Freya after she saved his son despite all of his previous distrust. Even after learning Freya had bewitched Mimir to prevent them from learning Baldur's weakness, Kratos cared enough to fight Baldur for her and later saved her life by killing Baldur when he attempted to choke her to death. He did not harm her when she swore vengeance on him, likely as he understands the pain she feels, having felt the same after killing his family, and believes that time will eventually cause her to forgive him. He also came to develop a strong friendship with Mimir, eventually taking his advice more and even comforting him at times.

Kratos now only kills out of self-defense and does not see the point in killing a weakened enemy and he is shown to be much more polite towards those who ally with him and displays enough increased sensitivity to know how not to make an enemy out of others. He even tries to be the voice of reason when Atreus finds out he is a god and lets it go to his head. Though he finds Brok and Sindri annoying, Kratos is never rude or ill-natured around them and even trusts them to work on his gear. In addition, while he admitted that he doesn't like it when Sindri talks about his brother, he was nevertheless absolutely disapproving and reprimanding of Atreus when he coldly told Sindri to shut up about it, even going as far as to look almost apologetic to the Dwarf. He was also clearly not amused when Atreus asked Sindri on why Brok is blue-colored while he isn't. He was even more merciful enough to be willing to spare a weakened Modi and was greatly shocked and angered when Atreus killed him in retribution for the latter's insults towards Faye. Likewise, for Baldur, Kratos offered him multiple chances to step aside and only fought him when threatened. He ultimately offered Baldur a chance to escape when he was defeated and even tried reasoning with him, saying that vengeance is not a path to be walked by as people would not find peace, recounting his own experience with it.

Due to his slaying of the Gods of Olympus, Kratos now understands that vengeance will not bring him or others peace, even trying to talk Baldur out of killing Freya and then killing him when he attempts to do so to try and end the cycle of children killing their parents. When Freya threatens Kratos and swears vengeance against him, he does not retaliate in anger and simply replies that she does not know him, showing maturity and self-control. When Atreus accused Kratos of not caring for Faye, he was simply annoyed and told Atreus to stop talking.

Although Kratos does not seem to enjoy troubling himself by helping dead spirits, mainly because they no longer have any "needs, only wants", he does help people when need be. When prompted by Mimir to rescue the Valkyries, Kratos complained, but was willing to submit when Atreus reminded him of Midgard's fate being dependent on them doing the job, showing that even though he preferred to stay out of others affairs, he still cared for his new home, likely due to how he had once destroyed the lands of Greece and therefore seemingly finding the idea of saving the Norse lands as being a chance to start saving a world instead of destroying one. He also noted that as the Valkyries are so strong, they are useful for his and Atreus's growth in skill. When they reached Jotunheim, Mimir wanted to stay behind because their business was between Atreus and Kratos, but Kratos objected at first because he didn't want any affiliates of Odin finding Mimir.

At the beginning of his journey with Atreus, Kratos kept his forearms wrapped in bandages to hide the scars from his chained blades, symbolizing his desire to hide his past from his son. At the end of their journey, after coming clean to his son about his past, Kratos threw away his bandages, deciding he has nothing left to hide.

Kratos has also developed a dry sense of humor such as when Mimir asked Atreus to carry him since Kratos was tackling deadly traps, Kratos replied he would not want Mimir to miss "this" (the excitement of dodging the traps) and smirked slightly when Mimir claimed Kratos was enjoying himself. At one point, when Mimir asks Atreus to take a knife originating from his homeland, Kratos responded by saying "yes, boy.... take it. We may need to butter bread somewhere in our travels.", which caused Mimir to berate Kratos and say that his sarcastic humor makes no one like him.

After freeing the Valkyries, Kratos became in a good mood and seems to doesn't care about what happened to the Valkyries from the past.

Before swearing himself to Ares, Kratos used a normal sword, but afterward, his weapons became the Blades of Chaos, short sword weapons that he wields mainly by swinging the blades on the chains in a whip-like manner. Kratos can also wield them in the manner of short swords and the Blades can also be enveloped with flame. After his victory over Ares, he replaces them with the Blades of Athena, which were badly damaged after Kratos fell into the River Styx and Athena replaces them with the Blades of Exile. Both of those pairs of weapons have most of the same powers and moves as the Blades of Chaos. After becoming the god of war, Kratos gained a number of godly powers, such as immortality and invulnerability to most forms of attack. However, he infused these powers into the Blade of Olympus, which is his most powerful weapon.

God of War: Chains of Olympus

God of War: Ghost of Sparta 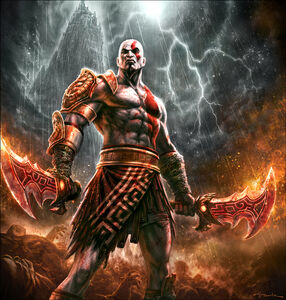 Kratos in God of War III. 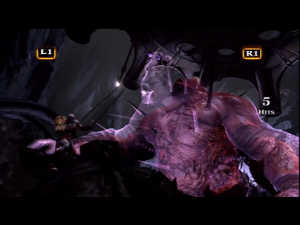 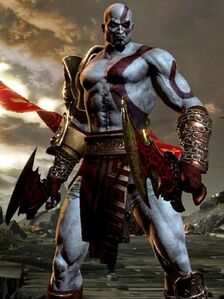 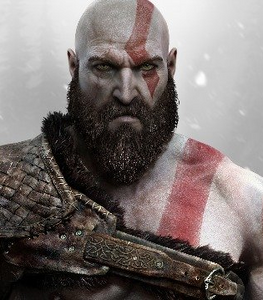 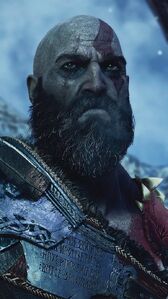 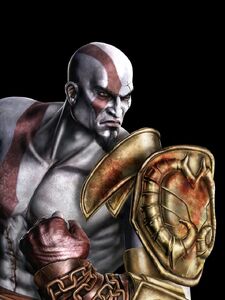 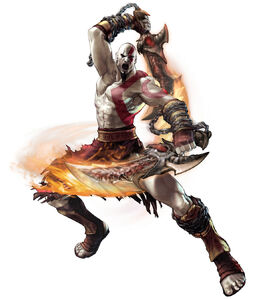 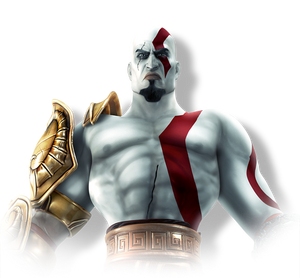 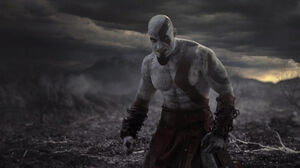 Kratos in the live-action trailer for Ascension. 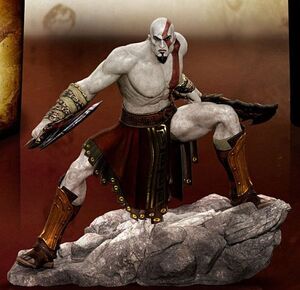 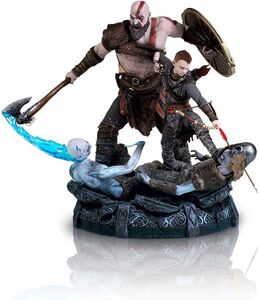 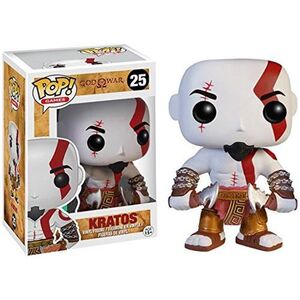 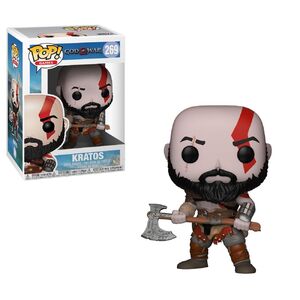 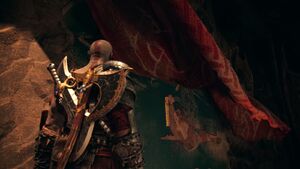 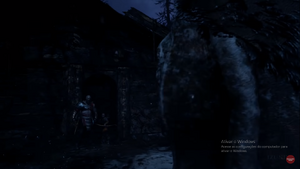 "Who are you?!"
Add a photo to this gallery 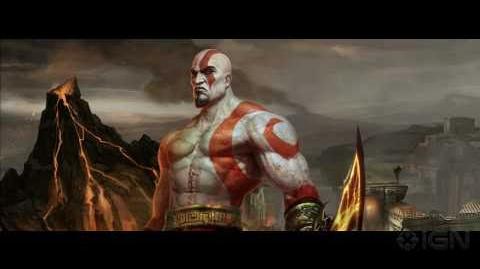 Retrieved from "https://hero.fandom.com/wiki/Kratos_(God_of_War)?oldid=2013358"
Community content is available under CC-BY-SA unless otherwise noted.