To be a great dancer

Kristyn Farraday is the main protagonist in the 2013 animated film, Barbie in the Pink Shoes, and the German short-film, Land of Sweets. She is voiced by Kelly Sheridan in the original film, and Ilona Brokowski (who did the German dubbings of Barbie in all of the movies) in the short film. Kristyn is a seventeen year old ballet student who dreams of becoming a world-class dancer.

When practising for an important showcase, Kristyn rips her pointe shoes, so she and her friend Hailey go to get new ones. They are given magical pink shoes by Madame Katerina, a seamstress, which take them to a magical ballet world.

Kristyn has a habit of not following the correct choreography, because she can't help but follow her own individual dance steps. By changing the stories of the ballets in the ballet world, Kristyn gets in trouble with the world's ruler, the Snow Queen, and has to dance her own steps to defeat her. Once she proves that there's more than one way to tell the story, she defeats the Snow Queen by dancing her own moves and saves Hailey. Then, by removing the pink dance shoes, she brings the two girls back to the costume shop in time for the performance. She is later told how amazing her dancing is through dancing from her heart and is congratulated for just that by Madame Natasha, Tara, Hailey, and the dance scouts.

While doing the ballet training, Hannah doesn't feel brave enough for performance her dance show. Later, Kristyn give her the pink shoes and they're magically transport to a magical world called "The Land of Cockaigne". They're dancing together and later they're returned magically in the stage and everyone claps for them.

Kristyn is nice, a dreamer, adventurous, brave, a devoted friend, a bit unconfident and she has a sense of humor. She loves ballet and is a good dancer, but when she is on the stage she loses herself in the music and lets her feet do "their own thing".

For ballet training, Kristyn wears a black leotard and light pink tights, with purple legwarmers. She has a long-sleeved, lilac-colored ballet sweater that she wears over her leotard, and a pink ballet skirt. Her pointe shoes were white before she got the pink shoes. Kristyn wears her hair in a bun for ballet lessons. She wears this outfit too in Christmas Special.

It is a fuchsia glittery tutu. It is quite simple and the only decorations it has are in the beginning of the top. When she wears this dress she has white tights and her hair is in an updo. She also has a white tiara with a pink flower gem in the middle.

​ When Kristyn transforms into Giselle, she has light skin, blue eyes and strawberry blonde hair that are tied with a hair tie with flowers in them. She wears a ballet dress which is butterfly-inspired: the neckline of it is on the shape of a butterfly's wings and the rest of the top of it has pink and blue decorations, while the bottom of the dress blue with decorations in the shape of the butterfly wings. With this dress, she wears white tights and the pink shoes.

When Kristyn transforms as Odette she has long dark brown hair, on which she wears a purple swan crown.

By Swan Lake, she wears a purple ballet tutu which is swan-inspired: the top has a some swan wings, while the bottom of the dress is purple, glittery and has swan feathers. With this tutu, she wears white tights and the pink shoes. Her dance outfit is similar, but the top has a pair of swan wings with a purple gem in the middle and purple decorations.

This is the dress the milkmaid dress transforms into during the final performance of the movie. Similar to the milkmaid dress, the only differences with it are that it is pink, and, instead of feathers, there are rose petals. When she wears this dress she has white tights and her hair is in a half ponytail. She also has a white tiara with a pink flower gem in the middle. Her white shoes change magically into the pink shoes.

In this short-film, she is seen with a pink tiara with some small pink gem and a pink ballet dress. The embroidery of the bodice and the rose petal on her tutu is glittery pink. The tutu is full and a fuchsia-pink. She also wears white tights and pink shoes. Her hair is a half ponytail, same with her hairstyle in her last performance dress. 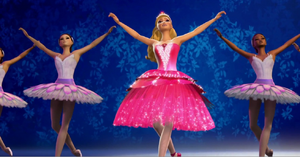 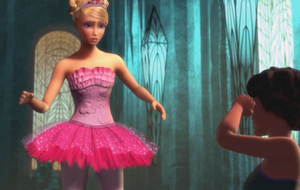 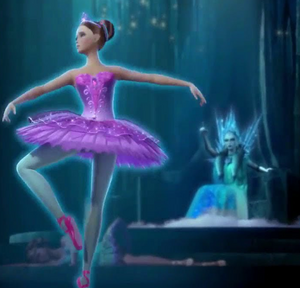 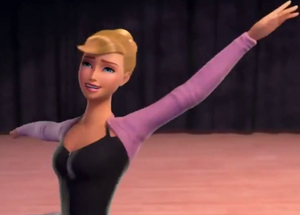 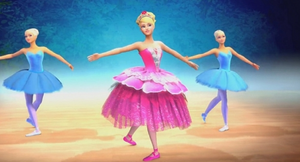 Kristyn in the teaser 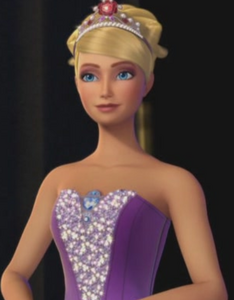 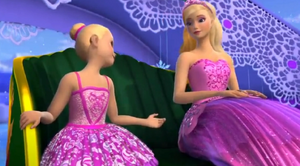 Kristyn and Hannah in Land of Sweets 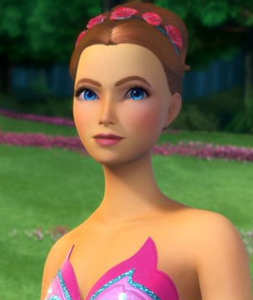 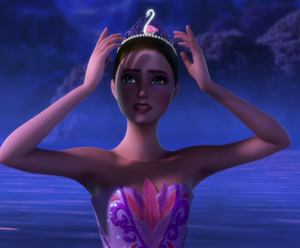 Kristyn as Odette
Add a photo to this gallery