Working at the restaurant

Despite working for Yzma as her helper, Kronk is a very nice person. He has a short-tempered father named Papi, as revealed in Kronk's New Groove.

Kronk starts as Yzma's loyal assistant, helping her where she is too old to do things herself. Kuzco and Yzma early on discuss awkwardly how he is a young, handsome man in his mid-to-late twenties. Despite working for Yzma, Kronk is not evil he has an angel and devil who appear on his shoulders as his subconscious whenever Kronk faces a moral dilemma. They are smaller versions of Kronk dressed in an angel and devil costume respectively and usually bicker and mock one another.

Kronk is also shown to be Jewish. In Kronk's New Groove, he fantasizes about marrying Miss Birdie in a Jewish ceremony, complete with him, stepping on glass.

Kronk is revealed to be a great chef, who can make such things, as spinach puffs and fondue. He also has a secret recipe for foie gras. Kronk knows a variety of recipes, as revealed in the first film when he takes over for the chef when the chef quits his job after being criticized by Kuzco.

Kronk is capable of incredible superhuman athletics, such as running from a school to his house and back in mere seconds, and running up a mountain (while having a seat tied to his body with Yzma riding atop). Through the series, it is learned that Kronk comes from a family of athletic health and fitness advocates. It was revealed in The Emperor's New School episode "Oops, All Doodles" that Kronk has a talent for drawing, he also knows how to speak and understand "Squirrelese".

Kronk is a hulking man who loves to cook and also can communicate with animals. During their dinner with the emperor Kuzco, Kronk put what was supposed to be the poison in one of the drinks and served the poisoned drink to Kuzco. However, he was distracted when his spinach puffs were still in the oven, so he went back to the kitchen to save them while Kuzco and Yzma talked about him. After he came with the spinach puffs, he couldn't remember which drink to serve Kuzco (and he ran out of "poison"), so he improvised with water from a nearby vase and made shaken poison margaritas. After giving everyone their drinks, Kronk secretly warned Yzma not to drink the poison. She secretly threw hers into a cactus while he faked drinking his. Just when it looked like their plan worked, Kuzco suddenly comes back up and starts changing into a llama. After some difficulty, Yzma managed to get Kronk to knock Kuzco unconscious. After wondering what went wrong, Yzma checked the vial and realized that the "poison" was an extract of a llama. Kronk then states that she should relabel her potions before being ordered to "Take him out of town and finish the job" (though they had time for dessert and a quick cup of coffee).

Despite being Yzma's sidekick he isn't evil at all, as near the end of the movie, after finding out that Yzma hated his spinach puffs he is heartbroken and decides to put her fate in his hands as he cuts down a chandelier which lands on top of her, but Yzma survives because she is so thin it passed through her. Yzma then drops him in a trap door, but he later emerges alive and well when he opened a portal hole while finding his way out, accidentally crushing Yzma who has turned into a cat. At the end of the film, he recruits her to be a part of his squirrel scouts.

In the sequel, Emperor Kuzco narrates the story about Kronk, now chef and Head Delivery Boy of Mudka's Meat Hut, fretting over the upcoming visit of his father. Kronk's father always disapproved of young Kronk's culinary interests and wished that Kronk instead would settle down with a wife and a large house on a hill.

In a flashback, Kronk tells the story of how he almost had both of these. As an unwitting accomplice to Yzma's plan to sell snake oil as a youth potion, he makes enough money to buy the old folks' home from the old folks and put his large new home there; but then when he realizes they've sold everything they own in return for something which doesn't work, he gives his home back to them.

Kronk's father, Papi, arrives and confusion ensues as several supportive friends try to pass themselves off to him as Kronk's wife and kids. But in the end, Kronk realizes that his wealth is in his friendships, and this finally wins his father's thumbs up and Miss Birdwell's love.

In the credits are shown the photos of their honeymoon, including in Paris, Pisa, and Venice.

Kronk is once again Yzma's partner and still Kuzco's friend despite carrying out Yzma's constant plans to drug Kuzco with a transformation potion. By the final episode, Kronk is appointed Kuzco's new adviser, while Yzma becomes his helper. It has shown that despite having some amount of hatred towards her, Kronk values his position as Yzma's lackey to some degree, as seen when she fired him on several occasions. He acts as Kuzco's sidekick, often partaking in his harebrained schemes. When working to destroy Kuzco, Kronk's conscience often gets in the way. In the show, Kronk works at Mudka's Meat Hut most of the time as well. A running gag in the series involves Kronk forgetting Yzma is Principal Amzy in disguise. However, Kronk revealed in the show's finale "Graduation Groove" that he knew about three episodes before the said episode, and only pretended to forget. Friendship aside, Kuzco sees Kronk as his inconstant rival, as Kronk earns a lot of fame and glory as of the school's star athlete and bodybuilder. 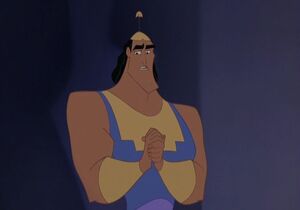 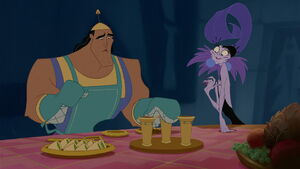 Kronk can't remember which cup he put the poison for Kuzco in. 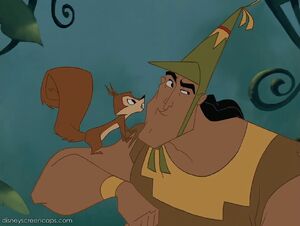 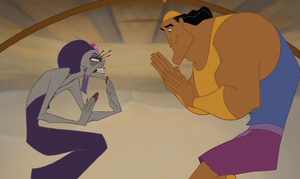 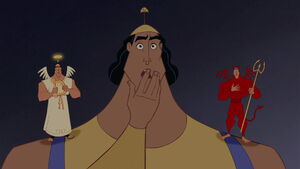 Kronk, his shoulder angel, and even his devil gasp in shock when Yzma claims to have NEVER liked his spinach puffs. 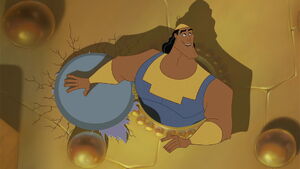 "What're the odds of that trap door leadin' me out here?" 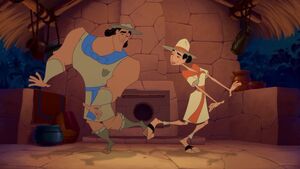 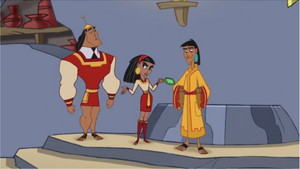 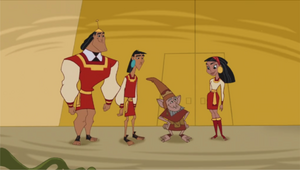 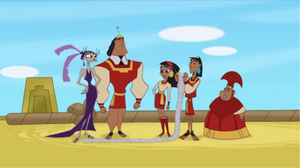 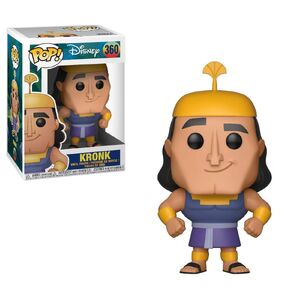 Kronk's Funko Pop!
Add a photo to this gallery

Retrieved from "https://hero.fandom.com/wiki/Kronk?oldid=2142067"
Community content is available under CC-BY-SA unless otherwise noted.