To rescue Dinosaur Planet and discover the truth behind Cerinia's destruction (first game).

To help Star Fox in protecting the Lylat System (sequels).

Krystal is a female protagonist in the Star Fox franchise. She is the first (and so far, only) female Star Fox pilot. Krystal is a beautiful, young blue vixen and a telepath from the long since deceased civilization of the planet Cerinia. She serves as Fox McCloud's main love interest.

Nothing much about her past was known. After having escaped the destruction of her home planet, Cerinia, Krystal sought refuge under Sauria, the Dinosaur Planet. There, when the Sharpclaw leader, General Scales wanted power (to the point where he was willing to break Sauria apart of it), Krystal chose to help the dinosaurs. Krystal had only one encounter with Scales before she made for Krazoa Palace. After learning the secret of the planet's distress, Krystal obtains the first Krazoa spirit. As soon as she does however, she recognizes someone and is captured in a crystal and suspended at the top of the Krazoa Palace. If all of the Krazoa were not returned, Krystal would surely suffocate. Fox had not only returned the Spellstones keeping the magic planet force at bay, but also managed to send the Krazoa spirits back to their rightful place. With all of the Krazoa back in the palace, Krystal is saved, seconds from falling to her death. Andross returns to life, but Krystal and Fox resist and the Cerinian reclaims her staff from Fox. After Andross's death, Krystal apologizes to Fox for what she had done and thanks him for his courage. Fox then allows her team membership.

As a new Star Fox pilot, Krystal plays a pivotal role in the Aparoid war, as Krystal is fighting in multiple fierce battles in this conflict. She helps fight to crush a rebellion lead by Andrew Oikonny. While fighting on Katina, she is the one who spots a Core Memory. in Sargasso, she and Falco take out the battleships outside the space station itself. While Fox is on Fichina, Krystal reprimands Falco and Slippy for "being so awfully selfish", then she comes to help fight off Aparoid counterattacks. When Fox repeats what Peppy said about those with strong wills be they allies or enemies, Krystal becomes concerned and asked him about it, which Fox replies that it sounded like someone he knew. In the Meteo asteroid belt, Krystal senses that Star Wolf had escaped the battle. After the core memory is sent to Corneria, a distress call is sent in from Sauria. Heading down together, Krystal and Fox fight the Aparoids to take out the hatchers in a vicious battle and meet the now adult Tricky. On Corneria, she fights Aparoid forces in the skies, then she and the team are horrified to see General Pepper infected by the Aparoids. At the Orbital Gate, Krystal and others fight viciously to buy Beltino time to complete the Anti-Aparoid program. Krystal fights alongside Fox in the Aparoid Homeworld city. Krystal, along with her teammates are sorrowful when Peppy and ROB 64 sacrifice themselves by using the Great Fox to break open the shields that were barring them from invading the planet, destroying the mothership in the process. The final battle was very deadly, but in the end, the team prevailed, ending the Aparoid War forever. Peppy and ROB are revealed to have survived through use of an escape pod, much to the joy of Krystal and her comrades, and Fox thanks his team for their support.

Years afterward, things took a sudden turn for Krystal. Fox began to fear for her safety and felt he had no choice but to dismiss her from the team, leaving her heartbroken. Although she does help against the Anglar Empire, what she does afterwards depends on the circumstances she is in. Krystal will either rejoin Star Fox, marry Fox before living a quiet civilian life with her husband (and has a son with him named Marcus), join Star Wolf, or flee the Lylat System completely (and becomes a bounty hunter called Kursed). However, all of these events are considered to be non-canon.

Krystal is very kind, helpful and caring, and she is very friendly and supportive towards her friends and allies. She is also somewhat tomboyish, as well as carefree and brave, often helping anyone in need. While she can sometimes come across as a tad stubborn and strong-willed, she continues to care for her team and has a great relationship with the dinosaurs of Sauria and will go to great lengths to help them in anyway she can, and her extrasensory perceptions prove to be extremely helpful when reading thought patterns of enemies and capable of sensing distress signals which is vital to her team fending off any threats on the planets. She tends to flirt with Fox quite often, and is the only person who brings out Fox's shy side and is amused when Tricky said that he can get things back to normal so they can come back on their honeymoon, which makes Fox nervous and agitated. 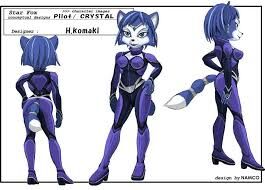 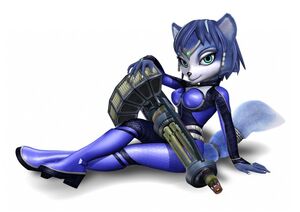 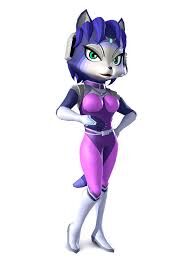 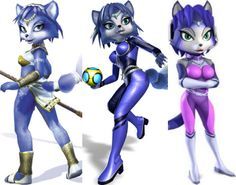 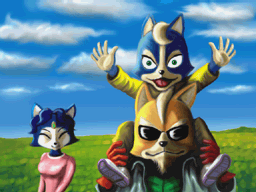 Krystal asking Fox if he was okay 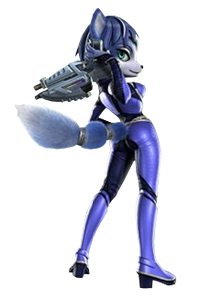 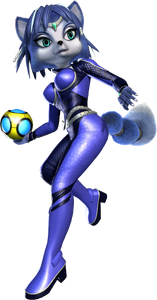 Retrieved from "https://hero.fandom.com/wiki/Krystal?oldid=2047883"
Community content is available under CC-BY-SA unless otherwise noted.