Little boy (by The Sisters)

Kubo and the Two Strings

Find his father's armor and defeat the Moon King (succeeded)

Kubo is the titular character and main protagonist of the Laika's 4th full-length animated feature film Kubo and the Two Strings.

The son of the former goddess Satiaru and of the samurai Hanzo of the Beetle Clan, Kubo is persistently hunted down by his grandfather, The Moon King, and his aunts Karasu and Washi, who seek to blind Kubo in order for the boy to "ascend" to godhood, which would also mean Kubo losing his humanity and the emotional attachment that comes with it.

Due to this chase, Kubo must gather his father's magical set of armor and defeat his malevolent family, along the way being accompanied by movie's two secondary heroes, the sarcastic Monkey, and amnesiac, but comical, Beetle.

He was voiced by Art Parkinson.

Kubo is best defined by his mixture of childish innocence and melancholic habits that have come from being forced him to grow up in a troubled environment. With his father gone and his mother consistently falling into a comatose state for prolonged periods of time during the day, Kubo was forced into taking on the responsibility of providing food for the both of them. His only comforts were the periodic trips to the nearby village were Kubo told stories about his father, which were in turn told to him by his mother. As Kubo put it, he gained happiness whenever his mother came out of her comas after hearing his experiences in the village, which consisted of storytelling, skimming rocks at the local river and other mundane trivialities, which gave the boy a resemblance of a normal childhood. As such, aside from his mother, Kubo developed bonds with the villagers, notably the elderly woman Kameyo, who would save him a spot during festivals and even encouraged Kubo to add comedic elements to his stories.

But deep down, Kubo was very much an ordinary child, having something of a mischievous side to his life views. This is brought out after the appearance of the mysterious Monkey. While traveling together, Monkey often acted as the voice of reason, reminding the boy that he needed to The Moon King threat seriously and often used sarcasm and dry wit to defuse Kubo's antics, such as using his musical powers to fly and playing with his food. In one instance Kubo used his powers to conjure up origami flies, which he used to pull a prank on Monkey by pinching her rear. This behavior further developed after meeting the more fun-loving Beetle.

The story of Kubo's life is set in ancient Japan, where he cares for his mother in a village. A spirit from the past turns Kubo's life upside down by re-igniting an age-old vendetta. This causes all sorts of havoc as gods and monsters chase Kubo, who in order to survive, must locate a magical suit of armor once worn by his late father, a legendary Samurai warrior named Hanzo.

Kubo was born from a newly married coupled named Hanzo the legendary samurai from the Beetle Clan and Sariatu the Moon Princess. Their marriage and his birth invoked the wrath of Raiden the Moon King, the tyrannical ruler of Heavens at that time and Sariatu's father, due to the fact that he had la ow opinion about mortal world for its flaws, and Hanzo began to question the way the Moon King ruled Japan and Heavens (Sariatu herself even pointed out that during her father's reign over Heavens, his tyrannical ways caused the Heaven to become a cold and dark place in spite of supposedly being better than mortal world). He and Sariatu's sisters, Karasu and Washi, attacked the Beetle Clan's fortress, cursed Hanzo into an anthropomorphic humanoid beetle who forgot who he was, and managed to take Kubo's left eye. But Satiaru's resistance, with the aid of Hanzo's men, allowed her to escape to the sea. In the last ditch effort to either kill or capture them, Raiden summons a huge tidal wave to drown Kubo and Sariatu, only for the former princess to use her magic to split the wave into two so she can safely pass through it. However, another tidal wave comes for them and sent them ashore.

Upon recovering from the wave, the worried Satiaru searched for her child and managed to find him nearby. She then established a cave on the large rock near the beach as her new home where she would raise her son for 12 years. But because of her injuries and sadness over her husband's supposed demise, she would eventually start going comatose for most of the day and only occasionally become active during the night, which caused Kubo to develop more quickly and become more mature than most children around his age out of necessity to provide for the both of them.

Encounter with The Sisters 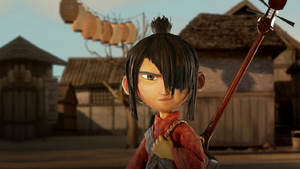