Heroes Wiki
Register
Don't have an account?
Sign In
Advertisement
in: The King of Fighters Heroes, Male, Anti-Hero,
and 28 more

Maybe nit-picking on other people (information from Sylvie Paula Paula).

Merge his pocket dimension with the real world in order to turn women into sculptures (failed).

He is voiced by Hiroki Takahashi, who also voiced Ryu.

Kukri is a member of a mysterious secret society. He hides his face with a hood at all times so nobody discovers his true identity. Kukri uses the power of "sand" to attack his opponents and move around quickly in battle. His official nickname is "Sharp-Tongued Sandman". Kukri's KOF XIV team ending reveals that he is familiar with Verse, especially knowing about the monster's half-power within Shun'ei. He was hired by Elisabeth to enter The King of Fighters XIV Tournament to find and rescue Ash who's residing inside Verse.

Kukri can stun and attack his opponents with sand. He can also manipulate stone as well. 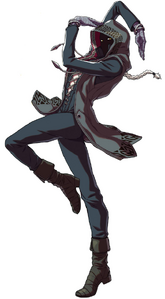