Psychic Freedom Fighter
Kumatora, also known as her waitress name Violet, is a major character in Mother 3. She is a princess and a member of Lucas' team, being the only female member. Unlike Ana and Paula Jones from the previous Mother/EarthBound games, Kumatora is a tomboy.

Kumatora is a young teenage woman with pink hair and olive eyes. She wears a cyan-blue dress similar to a large hoodie and red boots. 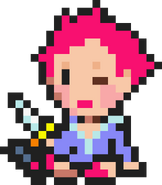