Kurando Inugami is a hero in the game Shadow Hearts and is one of the only living Harmonixers alive besides Yuri. He protects his master Naniwas Kawshima and his adopted daughter Yoshiko Kawashima from various assassins and soldiers sent after them by Naniwa's political rival Minister Ishimura. After Yuri and his friends help him save Yoshiko he joins forces with them to defend the world from Nicolai Conrad, a pawn of Ishimura's and an old enemy of Yuri's.

Kurando Inugami was born and raised in Inugami Village, a small community isolated by forests on Mt. Katsuragi in Japan. Kurando shares his family name with the village due to his family founding the village and so Kurando is considered the heir to it's legacy. Saki Inugami's family-line were all Harmonixers and so Kurando was trained by his mother to master the art of incorporating the spirits of slain foes into a spirit form for him to inhabit. To seek training as a swordsman and fighter though Kurando left his home though to train under the distinguished fighting instructor Naniwa Kawashima. In addition to his distinction as a trainer, Naniwa Kawashima was a prestigious politician in Japan's cabinet. Naniwa was critical of another cabinet member, named Kantaro Ishimura, who was a former pupil of his. For his trouble undermining   several corrupt policies Naniwa was targeted by Minister Ishimura, who in truth was the shadow ruler of Japan and had become fearful of any and all rivals. Ishimura arranged for Naniwa to step down from office and once out of the public eye Ishimura began to clear out all of Naniwa Kawashima's supporters. In an effort to grant himself the social clout needed to remain alive Naniwa adopted Hsien-Hsi, daughter from the Chinese royal family. With his new link to China's royalty Naniwa was safe as long as he stayed in the capital, and as long as she was in her foster father's care Hsein could not be touched by state-hands. In retaliation for the adoption stunt though Minister Ishimura decided that Naniwa only needed one daughter and had Naniwa's biological daughter, Yoshiko Kawashima killed during her station in China. Hearing of his master's plight Kurando pledged himself as Naniwa's personal bodyguard.

Naniwa renamed Hsien-Hsi after his late daughter to hide her from his rivals, this made things even more difficult for Ishimura since the assassination of Yoshiko Kawashima had never offically occured. Naniwa had to leave the capital eventually to attend his daughter's funeral. He made sure to go once a year, during which time Kurando escorted him and "Yoshiko Kawashima" to and from the Foreigner's Cemetery. As with any leave of the capital Naniwa was assaulted by Ishimura's black-opts team, the Iron Soldiers but Kurando fought off the attackers.

In the party's quest to find Nicolai Conrad, who had been taken into the custody of Minister Ishimura by his agent Kato, the game shifts from Europe to Japan. Out on patrol, while the rest of the party rested from the flight over to Japan, the wolf Blanca, a highly intelligent wolf with spiritual powers, spotted a young swordsman, Kurando, being attacked by Iron Soldiers and joined to help defeat the attackers. Kurando thanked Blanca for saving them and "Yoshiko" became instantly endeared to the snowy white wolf naming him "Snowball", a name Blanca repeatedly opposed in his own language. Kurando and the Kawashima's marched on their way after saying goodbye to the wolf but feeling they were still in trouble Blanca followed. Blanca is a member of the game's main party and so once he had been gone the rest of the party will go looking for him. Blanca's friends Yuri, Karin, Gepetto, Joachim, Lucia and Anastasia found him watching over the Naniwa residence, just in time to see a car drive-by and kidnap Yoshiko, knocking Kurando to the side and prompting Blanca to chase feverishly after them. Yuri and his friends stopped to touch base with the people Blanca was protecting. Naniwa told them he was a former politician and political rival to the current shadow ruler of Japan, Minister Ishimura and his men had tried many such assaults before. During the encounter though Anastasia was transfixed on Kurando whom she had immediately fallen in love with. Kurando told them the wolf had saved him earlier and helped defend his master. Shortly after both sides were caught up on the other Blanca returned, with Yoshiko's comb. He told them that he had found the Iron Soldiers' hideout, although only Yuri could understand him, and Kurando joins them as they head to save Yoshiko Kawashima. Once Yoshiko was saved and Naniwa was safe in the Capital again he encourages Kurando to follow Yuri and his friends who would both be able to teach him much and might need his help in their travels across Japan.

Kurando is a samurai and very skilled at sword play. Kurando is trained to use his sword to strike quickly and critically, making him an highly effective fighter. While Kurando is very strong he is slightly less so than Yuri and considerably less so than Joachim, however Kurando's real value is that of his physical prowess paired with his Fusion ability. Being a Harmonixer like Yuri, Kurando has the power to transform his body into the physical manifestation of a demon. Unlike Yuri though, Kurando was not traumatized in his youth and so his psyche' was not shattered, which while lessening the risks of demonic possession and allowing Kurando to grow up psychologically more stable, limits him to only being able to transform into one main fusion form. Kurando's main Fusion is Tsukiyomi a moon god in Shintoism, who appears to function as a guardian spirit inhabiting Kurando's body. Through an optional mission, Kurando may unlock a second Fusion form, Jutendouji, the Shinto god of fire and destruction. Like Yuri, Kurando absorbs the spirits of demons and ghosts he has slain and uses the energy of their malice to feed his fusion forms to grow more powerful. Both Tsukiyomi and Jutendouji have enhancement powers and offense powers. In Tsukiyomi's form Kurando can heal himself and allies, boost stats and blast foes with a silvery beam of holy light, while as Jutendouji, Kurando can boost his or an alley's attack power or carve into them with his fiery blade at full power. Kurando's speed is about as high as Blanca's, which gives him almost always the first move in battle. 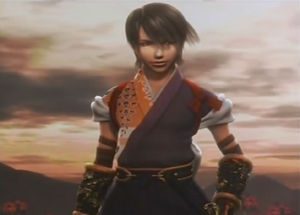 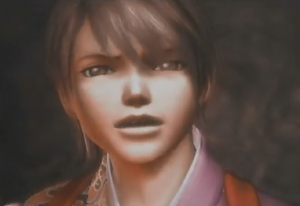 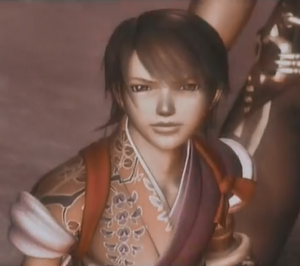 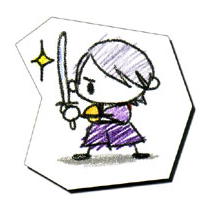 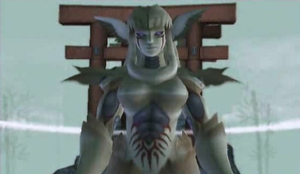 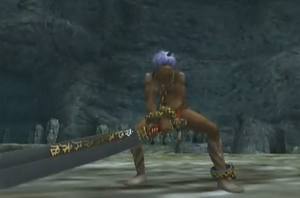