Testing the power of the Gashats.
Boasting about his genius.
Proclaiming himself to be a god.

Create Kamen Rider Chronicle and force everyone to fight against Bugsters for eternity as a testament to his genius (failed).

Kuroto Dan (檀 黎斗,, Dan Kuroto) is the CEO of Genm Corp. and the central antagonist-turned-supporting protagonist of Kamen Rider Ex-Aid. Initially starting off as a collaborator of the Bugsters, after being betrayed and killed by Parado, Kuroto is revived by Poppy Pipopapo and, at first reluctantly, assists the heroes in stopping the machinations of the Bugsters and later his own father, Masamune Dan.

He returns again as one of the two main characters of the web special Kamen Rider Genms -The Presidents- alongside Gai Amatsu, in which he infects Gai as a Bugster and reemerges from him.

He is portrayed by Tetsuya Iwanaga.

As a teenager, he created games for his father's company. But when Emu sent in ideas for games that surpassed his own, Kuroto began a 16 year long mission of revenge and hatred as he believed he was the only one capable of making great games. He was among the first people to learn of the Bugster Virus in 2000, having infected Emu as part of his revenge, and studied him for a decade before extracting most of the virus to orchestrate Zero Day with prototypes of the Rider Gashats known as Proto Gashats (プロトガシャット Puroto Gashatto). While Kuroto developed CR and the Kamen Rider systems for the Ministry of Health to combat the Bugsters, he allied himself with the monsters while interfering with the Riders' battles as Kamen Rider Genm (仮面ライダーゲンム Kamen Raidā Genmu). His goal would later be revealed to use the Gashats' completed data to create a Gashat containing "The Ultimate Game": A global-wide AR MMO death battle called Kamen Rider Chronicle (仮面ライダークロニクル Kamen Raidā Kuronikuru), and claiming himself a "Game Master" or a god of that "Ultimate Game" he created. Strangely, he also helped other Riders temporarily when it came to threats to his agenda, such as when he helped Kamen Riders Specter and Necrom against the Great Eyeser's Gammas in Kamen Rider Ghost's finale.

In the Heisei Generations movie, Kuroto allowed the Next Genome Institute to take over Genm Corp. while he secretly recorded their battle data to create a "forbidden game" which allows him to summon digitized versions of Kamen Riders Wizard, Gaim and Drive via the Ganbarizing Gashat. This continued in Tricks where he creates the Legend Rider Gashats to gather the data he needed to upgrade his Ganbarizing Gashat and summons digitized versions of Kamen Riders Double, OOO, and Fourze. However, a new Dr. Pac-Man (later secretly revealed to be Parad in disguise) emerges and rescues Emu while assisting the other two doctor Riders against Genm and his summoned Riders. It is also revealed that he was the one who contacted Next Genome to use Emu's body on Zero Day and framed his father Masamune once Emu's condition went into a coma-state after his exhaustion from winning the Tekken tournament in 2010.

As Genm, Kuroto forces Ex-Aid to complete the Shakariki Sports Gashat's data by targeting Poppy and a patient Emu is currently handling. With ten of the Gashats' data cleared, it allowed Kuroto to survive Ex-Aid's attack by transferring the data of his "death" into the Dangerous Zombie Gashat as planned. This allowed himself to become a Level X version of Genm from that moment on. But following his act of murdering Kiriya to conceal his identity, Kuroto is exposed and goes on the run from the authorities while proceeding to relieve the Kamen Riders of their Gashats to complete his plan while allowed himself to be "killed" to achieve his Level X form's full potential. Deliberately infecting himself with the Charlie Bugster when the Ministry of Health's officer found his hideout, Kuroto tricked Emu to get away from being arrested by the Ministry and get Emu the refined Shakariki Sports needed to reach closer towards his goal while corroding Emu's Gamer Driver to be beyond use. But Emu uses Kiriya's Gamer Driver in conjunction with the Maximum Mighty X Gashat to reprogram Genm's data to render his Zombie Gamer form mortal so he and the other Kamen Riders can defeat him. After the fight, Kuroto ends up being killed by Parad who takes his Gashacon Bugvisor and Dangerous Zombie Gashat.

In Kamen Sentai Gorider, it is revealed that Kuroto had a backup plan by creating an unbeatable game before his death at the hands of Parad where he implemented himself into the Game World. He disguised himself as Kazuma Kenzaki in order to fool Emu and four deceased Riders (Another Agito, Baron, Marika, and Lazer) into being sent into an impossible game for one sole purpose: gathering the despair of dead Kamen Riders to power Kuroto's resurrection. However, using Blade's form proved to be a fatal mistake as using Undead powers attracted the attention of the real Kenzaki due to Undead being attracted to each other. His plan was stopped by the appearance of the real Kenzaki who destroyed the Game World by applying the Undead Battle Fight rules to said world and being the only Joker there, resulting in its destruction. After that, Kuroto transforms into Genm and gets upgraded by Totema via the gathered despair, only to be beaten by Ex-Aid and the Goriders. His anger leads him to creating a big purple space warp in an attempt to destroy Ex-Aid and Blade, but he is successfully stopped by the deceased Riders who sacrifice themselves to allow Emu and Kenzaki to escape.

Apparently, before his two deaths by Parad via the Gashacon Bugvisor infused with the Dangerous Zombie Gashat and in Kamen Sentai Gorider, a young Kuroto was revealed to have worked with Poppy's former host on a Bugster development project where he hid a Gamer Driver and a Proto Mighty Action X Origin Gashat as a failsafe from the infection. Poppy would later revive him, albeit as a Bugster, before he proceeded to save Emu from Parad as a means of getting revenge on Parad for killing him and having fun with the Kamen Rider Chronicle "game" without the former "Game Master" himself. However, Kuroto still can't be trusted as he still retains his sociopathic behavior. Thankfully, Poppy is the reason Kuroto regains his humanity due to the former being his mother's host and his past revealed that he was unable to save his mother when Kuroto unintentionally infected her, which is the reason why he unleashed the Zero Day and created Kamen Rider Chronicle, as a means to revive his mother, while also counting on reviving the other Bugsters' deceased hosts, including Kiriya Kujō. Because of this, he called himself as "Shin Kuroto Dan" (新檀 黎斗 Shin Dan Kuroto). When his father returns as CEO and reveals his true colors, Kuroto realizes that he was just Masamune's pawn which he is not happy about and figures he should have thought about killing him instead of only framing him 5 years ago if Kuroto knew what his father had been plotting behind Kuroto's back for 16 years. After Hiiro's betrayal due to being blackmailed by Masamune, Kuroto creates the Hyper Muteki Gashat to be compatible with Ex-Aid's Maximum Mighty X Gashat for him to transform into Muteki Gamer as a countermeasure against Cronus and his unwitting pawns, such as a blackmailed Brave and a revived Lazer Turbo.

Using the beta test game-based Proto Mighty Action X (プロトマイティアクションX Puroto Maiti Akushon Ekkusu) Gashat allows Kuroto to become Genm, a dark version of Ex-Aid who is stronger than him due to using a Proto Gashat which has unlimited powers, but also a side effect of harming the user's body from prolonged use. His chibi-like first form, Action Gamer Level 1 (アクションゲーマーレベル1 Akushion Gēmā Reberu Wan), can generate chocolate block-like platforms. Pulling the Gamer Driver's lever upgrades Genm to his sleeker primary form, Action Gamer Level 2 (アクションゲーマーレベル2 Akushion Gēmā Reberu Tsū). Genm's Gashacon Weapon in these and other recent forms is the Gashacon Bugvisor (ガシャコンバグヴァイザー Gashakon Baguvaizā), which has three modes: gamepad, beam gun, and chainsaw. The Gashacon Bugvisor can absorb a defeated Bugster's data and trap them within it. When activating Proto Mighty Action X, a Game Area is created which generates several Energy Items with unique power-ups in random chocolate block-like containers. Before his identity as Genm was revealed, Kuroto utilized a voice scrambler whenever he spoke and was only referred to as "Black Ex-Aid" (黒いエグゼイド Kuroi Eguzeido) by the other Riders. At one point, Kamen Rider Ghost mistook Ex-Aid for Genm due to their similar appearances. 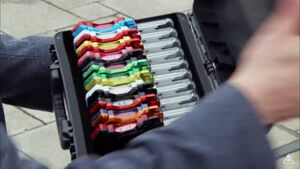 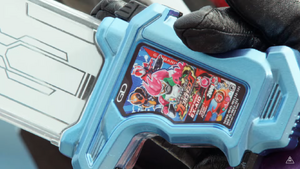 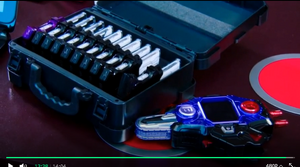 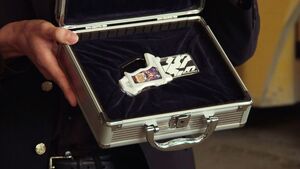 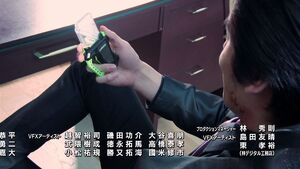 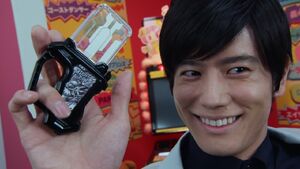 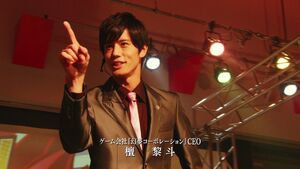 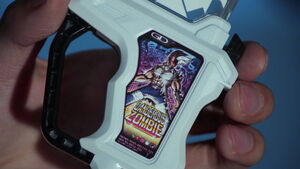 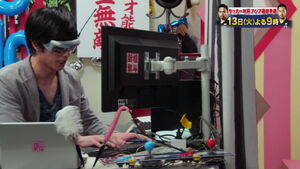 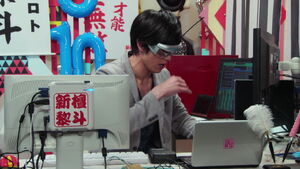 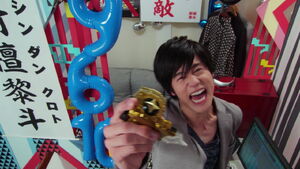 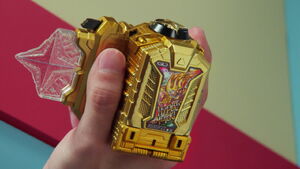 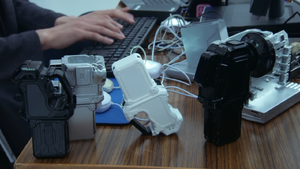 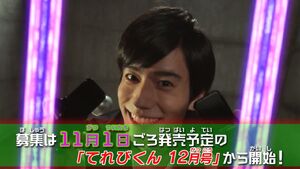 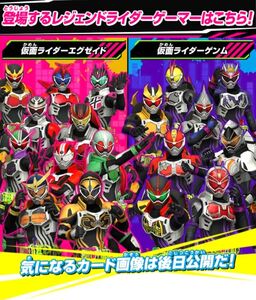 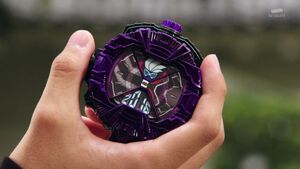 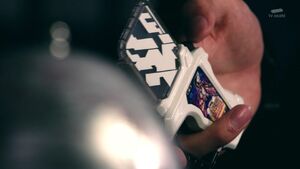 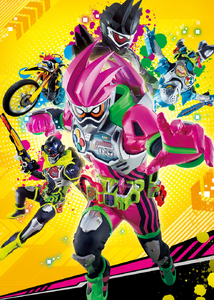