The Death of Snakes

Kurotora (黒虎) is the youngest brother of the Kai Ken brothers in Ginga: Nagareboshi Gin and one of supporting characters in Ginga Densetsu Weed.

He was voiced by Ryōichi Tanaka in GNG and Tadashi Miyazawa in GDW in the Japanese Version.

He is the most urgent and harsh of the Kai Ken brothers. He provokes easily and refuses to flee under any circumstances. Like his brother, he greatly appreciated Ben and was always ready to die for him. Kurotora is sometimes surprisingly understanding and advises the younger ones, but also easily instructs the young. Apparently due to the fate of his nephews, he is no longer completely against retreat.

Prior to the series, he lost an eye in the aforementioned attack by a rogue dog named Tin. But he was miraculously saved by Ben who later took Kurotora, along with Akatora and Chūtora, and raised them until they grew into young adults.

Kurotora and Chūtora were taken prisoner to Bill's Mountain Temple, where they were buried to the ground. Gin later came to help the brothers, trying to warn them that it was a trap. Other Ōun warriors, Musashi and 20 fighting dogs also came to the rescue and sniper grabbed Kurotora by the neck and threatened to kill him. Musashi and the others could do nothing but release their grip on their opponents. Then Bill arrived and knocked Sniper out of his hostage. Gin won the duel against Sniper, when the prisoners were released and Bill joined Gin's group.

Later, the Kai Ken brothers followed Gin's packs in a battle against the four rulers of Mutsu. When the battle was over, the army returned to Ōhu, ready for the Great Battle.

Kurotora and some of Ōhu army go out to find Cross who has been kidnapped by wolves.

Kurotora went with others to Hokkaido, to battle the Gaia Empire. Kurotora survives the battle and returns to Ōhu with the others.

He also looks after the sons of his late brother Chūtora; Shigure, Dodo, Buru and Shōj. Even though he is old, Kurotora still retains his quirky and stubborn character and still has the same fighter character as the young, and escape is not heard.

Kurotora lives with her nephews in Kufu until Kagetora, Ken and George arrive to tell of Hogen's conquest and Gin's son, Weed.

Kurotora's nephews are going to defend the Mountain Palace Hogen's little brother, Genba against the crowd. He tells his nephews to seek help from Mutsu and plans to fight and die himself in the battle against the great army of Genba. However, Akame comes and drags Kurotora with him to the Kotobuki River. Kurotora is furious with Akame and fears for his nephews. Later, he is saddened to find the bodies of Shōji, Dodo and Buru. Kurotora swears revenge and gets angry at Akame when he doesn't get Shigure to fight and take revenge on Genba.

Later, Kurotora tries to drop Hōgen off the cliff, but fails and falls himself. However, he survives the fall and is ready to challenge Hōgen again. From the sidelines, he watched the Weed and Hōgen duel, and at the end of the fight praised Weed's perseverance and respected Gin's decision to hand over his son.

After Hōgen's death, Kurotora remains in Ōhu. He is one of the dogs that Sasuke fetches for the battle against Shōgun, but the fight ends soon after they arrive. Kurin also takes part in the fight against Russian war dogs under Gin's leadership.

Later, when Ben dies, Gin is about to send someone to tell his boys, Ken and George. However, Cross denies this and says that Ben had previously said he did not want to cause any trouble. Kurotora is amazed, but respects Ben's words and regrets how often he had commanded his own sons and nephews.

Kurotora and other warriors of Ōhu are struck by a volcanic eruption. He survives and is one of the warriors of Ōhu locked by Jinemon Kurohabaki in the mine. Later, the dogs are released and they participate in the final battle against Masamune Kurohabaki.

At the beginning of the story, Kurotora and Weed talk to Gin, who is almost completely blind. Suddenly, Gin senses danger and Kurotora notices the smell of blood. Weed sets out to find out what it is, and Kurotora calls on other warriors to help.

Later, Kurotora, Gin and Akame hear shouts from different directions. Gin smells the Akakabuto smell and realizes that Akakabuto's offspring are moving in the area. With a howl, Kurotora tries to summon all Ohu Army to Gin. When the wounded Hiro and George arrive on the rock, one of the bears arresting the Rocket attacks them. Kurotora runs off the cliff to help Mel, Cross and Ken, but they arrive when Hiro has already been killed by a bear. Kurotora goes out to chase the bears with Mel, but Cross tells them to leave the pursuit and carry the wounded on the rock.

Bears are preparing to attack dogs. Gin decides to act as a live bait and attacks Monsoon on Zetsu Tenrō Battōga, but the bear stops the attack and throws Gin to the ground. Ōhu the warriors are furiously attacking Monsoon, disregarding Gin's orders, and a huge bear shakes part of the doggie in an instant. Kurotora is wounded, but not seriously.

When Monsoon is later attacked by Musashi, Kurotora jumps in but is hit by Monsoon's right front paw. The Kurotora is seriously wounded, rolls down the cliff to Jerome and quickly loses consciousness.

Kurotora survives, but is taken to a boulder prison with many other Ohu Army. Bears do not kill dogs right away, but keep them as toys and food storage. Kurotora realizes that Musash is dead and also believes his time has come, but instead he falls asleep. 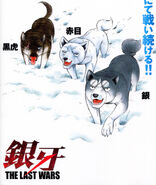 Retrieved from "https://hero.fandom.com/wiki/Kurotora?oldid=1794074"
Community content is available under CC-BY-SA unless otherwise noted.