Spending time with Kabal and his allies.
Serving Liu Kang and Kitana.

Aid Raiden in his quest by any means possible.

Serve Shinnok and Quan Chi.
Serve Liu Kang and Kitana (currently).
Get his revenge on Raiden.

Kurtis Stryker is the leader of the New York Police Department's Special Riot Control squad and a hero from the Mortal Kombat series of fighting games.

In Mortal Kombat: Defenders of the Realm, he was voiced by Ron Perlman (who also played Hellboy in the titular films, animated films and Hellboy: The Science of Evil), and in MK2011, he is voiced by Matthew Mercer (who also voiced the character in Mortal Kombat Legends: Battle of the Realms, Leon S. Kennedy in Resident Evil 6 and Robin in Batman: Arkham Knight).

When Shao Kahn began merging Earthrealm with Outworld, Stryker and his squad attempted to quell the ensuing chaos. But soon Shao Kahn had captured the souls of all the humans, except for those of the chosen warriors protected by Raiden. Stryker did not know why he had been spared until he received a vision from the thunder god, instructing him to head to the west and meet up with all the other chosen warriors, where he could find out why his survival was so important.

Stryker didn't wish to be one of the few souls spared at first, but then he entered the battle, determined to save the souls of all those that he had sworn to serve and protect.

Along with the other warriors of Earthrealm, Stryker liberated the realm from Shao Kahn's clutches. Alas, when he liberated Earthrealmers' captive souls along with his home realm, most, if not all, of Earthrealmers forgot what happened to them as their memories were wiped clean, Leaving Stryker to return to his daily police life with no recognition or rewards he should have deserved.

Stryker made a small cameo in Mortal Kombat: Deceptions Konquest mode, where due to now being aware of over Realms, he is seen wanting to train to be a Seidan Guard in Orderrealm.

Stryker was later present in Mortal Kombat Armageddon with a new look as a member of the Forces of Light at the Battle of Armageddon. After the Pyramid of Argus manifested, Stryker was the first to run up the Pyramid, sucker punching Mileena and throwing Kabal off the stairs, but was attacked by Kano. In the canon version of events, Stryker was killed with the majority of the kombatants. In his ending, he defeated Blaze, becoming so powerful, he felt that the law could no longer restrict him. Stryker became a vigilante and began making plans to take out the wicked on his own.

In the rebooted timeline, Stryker is first seen during Outworld's invasion. Part of the New York City SWAT team alongside his partner Kabal, Stryker and Kabal were completely out of their depth. However, Reptile appeared and attack the duo on the rooftop, they tried shooting at him, but no effect. When Kabal was injured, Stryker battle Reptile and defeated him, he and Kabal decided to head down the streets to help then they spotted Mileena.

In combat, Stryker relies mostly on police weaponry, such as guns, tazers, and grenades, which gives him the advantage over his foes in terms of range, since he can use these weapons to inflict damage from a long range. Stryker also greatly utilizes a police baton, using it to propel himself forward with great speed and trip his opponents or fling them behind him. 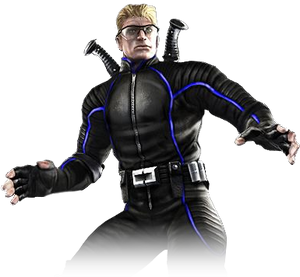 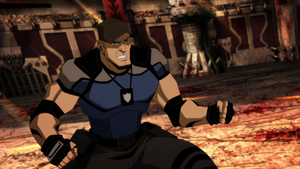 Stryker in Mortal Kombat Legends: Battle of the Realms. 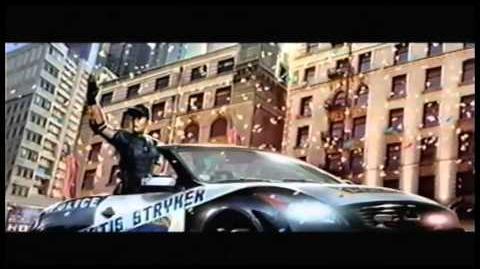