Leader of his packs
Member of Ōu Army

He is voiced by Yūki Masuda.

He is a white Kishu with many scars around his body.

He is extremely violent and short-tempered and even challenges Weed at first. He used to believe that violence is justice and that refusing to kill is the act of a coward.

After Toube's death, he swore to get more mature and cool-headed, although he can have angry outbursts from time to time.

He is a leader of a pack of fifty young dogs that were abused by their parents. He is also one of Weed's companions who joined in a war against Hougen and his troops.

Kyōshirō and other Ōhu warriors will be surprised by the volcanic eruption. He survives and is one of the Ōhu warriors locked by Jinemon Kurohabaki in the mine. Later, the dogs will be released and will participate in the final battle against Masamune Kurohabaki.

Kyōshirō leaves with George, Mel, Izō, Hiro, Kage, Ken, Tesshin and Jerome under Weed to investigate the smell of blood. They find the body of Denshichi and are suddenly attacked by the three descendants of Akakabuto. Weed is seriously wounded when Jerome helps this Ken's back. Ken took Weed to the rock where Gin and most of the others were, and Mel left with him.

Bears are preparing to attack dogs. Gin decides to act as a live bait and attacks Monsoon on Zetsu Tenrō Battga, but the bear prevents the attack and throws Gin on the ground. He and Ōhu warriors are attacking furious Monsoon, ignoring Gin's orders, and a huge bear grunts some of the dog in an instant. 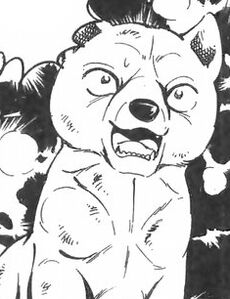 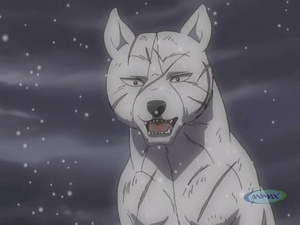 Retrieved from "https://hero.fandom.com/wiki/Ky%C5%8Dshir%C5%8D?oldid=1638750"
Community content is available under CC-BY-SA unless otherwise noted.