Bambino
First King
The Hope of the World

Commander (during the Crusades)

Ky Kiske is one of two leading characters alongside his eternal rival, Sol Badguy. He is one of the most well known characters, and has been an integral part of the series since the first Guilty Gear. He is a very charismatic young man who possesses a strong sense of justice and a devout religiosity, which sustain and guide him through all manner of shaking uncertainties.

Ky is a handsome young man with blond hair and blue eyes. His hair has grown in the timeline of the series, to the point where he sports it as a ponytail in Guilty Gear Xrd -SIGN-. His usual outfit is a loosely-fitting, blue base version of the white dime-a-dozen Sacred Order of Holy Knights (aka, the Holy Order) Uniform, fastened together by a white belt buckle is inscribed with the word "HOPE".

Ky is a deeply religious man, the adjective describing both his devotion to God, as well as his commitment to the ideals of law, order, and honor. He is diligent and scrupulous. However, despite his great faith and strong conviction, he is not beyond doubt, and is not entirely incapable of seeing the colors between black and white. Loyal to his ideas more than his surroundings, Ky will not hesitate to investigate his superiors if he believes them to be undermining his conceptions of justice. He is a compassionate man and chivalrous in the classical way, being known to hold back against female opponents if he is forced to fight them. Though his strong beliefs tend to color his moral world black and white, his experiences have developed his character beyond this caricature.

In his Overture profile, it is stated that his position as a king made him lose some of his zeal, but he gains a new perspective over things in its place.

Ky Kiske is the current captain of the International Police Force (IPF). Charismatic and highly talented with both swords and magic, he was the former commander of the Sacred Order of Holy Knights (Seikishidan) during the Holy War (2074-2175 AD) that was fought between mankind and the Gears (the latter under the leadership of Commander Gear Justice).

Orphaned at a young age during the war, he met the then-commander of the Sacred Order, Kliff Undersn. Afterward, Ky was told to come back after five years of training to see him again if he really wanted to fight. Five years passed, and Ky returned, ready to do battle.

A year passed and due to the retirement of Kliff, 16-year-old Ky Kiske was recognized for his talent and named the new chief of the Sacred Order. With the appointment, he was given the Thunderseal, a weapon that allowed the wielder to manipulate the difficult element of lightning, and one of the Sacred Order's holiest treasures. Soon after his appointment, he led the Knights to victory, and ended the 100-year genocidal war. The Order was disbanded after the Holy War ended.

Five years later, Ky entered the IPF. He was soon promoted to rank of captain. However, he is considered easily controllable, and is manipulated by higher powers who were unseen players from the Holy War.

After Ky hears rumors of bloodshed, huge prizes, and the possible resurrection of Justice, Ky Kiske enters a tournament that will select members for a second Sacred Order of Holy Knights.

After hearing Justice's last words at the conclusion of the tournament, Ky hears new rumors, these ones of a new Commander Gear that doesn't wish to harm humans. He sets out to find the truth in Justice's final words and the flaws within his own concept of justice.

After rescuing a beaten Commander Gear Dizzy and entrusting her to Johnny's care, Ky returns to his normal duties as a captain of the IPF. As soon as he is returned to work, Ky Kiske is thrust into a new conspiracy which includes robot clones of himself, a secret organization, a woman in red named I-No, and his bitter rival, Sol Badguy.

Ky investigates the Post-War Administration Bureau and fights its minions, ultimately separating from the police but continuing his labor as a banner of justice. He later helps out Dizzy control her power, and protects her. The two grow close to one another, marking the beginning of their romantic relationship.

Depending on if players defeated Dizzy with an Instant Kill or not, Ky will either look after Dizzy, leading into his Path 1 ending, or he will leave Dizzy in Johnny and May's care again before going his own way (Path 2).

Ky has assumed the position of king, reigning over the land of Illyria, armed with the sword Aquila, as he is keeping his lover sealed within a time barrier with the use of the Thunderseal's power. Having grown much more mature and composed over the years, his rivalry and animosity towards Sol has diminished entirely, having entrusted to him his part-Gear son, Sin. Ky is shown at constant conflict towards his own ineptitude of being a father and a husband, due to the racial issues regarding Gears. His relation with his son Sin is not quite close as well, as Sin is shown calling his father a "shitty king".

Ky is a simple yet versatile character with long range normals and a variety of projectiles. He can rapidly switch between keeping the opponent away and turning on the offense, and has a number of very useful FRCs for this purpose. In particular, Charge Stun Edge (236D) is an exceptional pressure tool when used after a knockdown, allowing Ky to attack without fear of retaliation and repeat it if he succeeds. However, he has one big disadvantage: his damage output is unusually low; whereas most characters can hit 60% damage quite easily with little or no Tension, Ky has trouble breaking 30% even with his stronger attacks. This means that a Ky player typically has to play better for longer each round and can't rely on cheap tricks. Because of his simplicity and reliance on fighting game fundamentals, Ky is an excellent choice for beginners.

Ky Kiske is an extremely talented strategist, swordsman, and magic practitioner. In the novel Lightning the Argent, it is revealed that his ability to create lightning projectiles from his sword Thunderseal is extraordinarily difficult, as lightning is the most difficult magic to control, a testament to his mastery of the weapon. It is also said that he is well adept at performing other forms of elemental magic, though he prefers to use lightning. In Guilty Gear Vastedge XT, it is also revealed that he is an expert marksman, as he is seen wielding a lightning-charged gunblade.

Ironically in Xrd, his left eye becomes red, with a Gear symbol inscribed on the iris. It is unknown if he's either a human implanted with Gear Cells, or if he performed an experiment on himself to give him Gear-like qualities. When he activates the Gear Eye, it vastly increases his strength, speed, durability and magic to supernatural levels. He can regenerate fatal wounds in mere seconds and using raw strength in this state, He was able to prevent the titanic Justice from falling from the sky - as well as the small island of stone she rested on -. His lightning magic also intensifies greatly and takes on a violet hue. However, he can only maintain this state for short intervals and it seems to cause pain afterwards.

Ky has also discovered that one of Thunderseal's hidden abilities is to isolate a person or object within a selective space where time has stopped. However, Ky discovered this power out of desperation to save Dizzy from sublimation and does not know how he performed such a feat.

Bind all of us together
Ablaze with hope and free,
No storm or heavy weather
Will rock the boat you'll see. 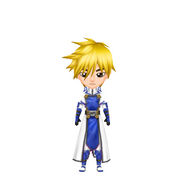 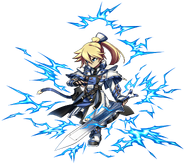 Retrieved from "https://hero.fandom.com/wiki/Ky_Kiske?oldid=2217107"
Community content is available under CC-BY-SA unless otherwise noted.