Boxing with his friends

Listening to music with his headphones
Watching sports on tv.

Become the best boxer of the world

Kyle is a boxer and a character from Mini Fighter. He has the ability to punch his foes with his boxing gloves.

A boxer and street fighter from Florida, USA. Like Chris, he is dreaming of becoming the best champion because he admires his father who is a American and a former boxer. Kyle is a 16-year-old fighter who's good enough to easily beat other fighters, and Delta-M, who is trying to get rid of Dr. Shade's fighters and dominate the world, takes Kyle as his subordinate. As a man who wanted to make it, but he was quick to notice, he refused to say that he is not a slave and that he wants to live freely without belonging to someone. As a result, Kyle is imprisoned in a crystal prison for rejecting Delta M's offer. Since then, no one has known his life or death, and his best friend Chris is looking for him anxiously. He is ordinary worker now, but Kyle's father (not appearing in the game) was the best boxer in the United States until he was hit by an accident, and Kyle is very respectful of him and his dream of becoming the best champion. Later, he is now rescued by Kang and his friends and helped joined him to stop Delta-M.

Physical Features: Kyle is a young boy with spiked blond hair and red eyes with blue glasses. His normal form has a sliver zigzagged headband. His second and third form has has toned down hair and shorter. He appears to wear glasses in all his forms.

Kyle is a 13 year old boy with a white shirt with blue and brown shorts with a belt with a gold hexagram, a red scarf around his neck, dark brown shoes with white socks, and he wears red boxing gloves.

His evolved form is 16 years old and has blue headphones, a red and black tracksuit, black sneakers with red laces, champion belts, spiked bracers, and black fingerless gloves with spikes.

His ultimate form is 19 years old has long hooded black cloak with no shirt, orange headphones, blue jeans with orange spots, black sneakers, a belt with a golden anchor, and blue gloves.

Like Chris, he has a bright, outgoing, free-spirited personality, and has a good heart and is very brave. Kyle is willing to become a amazing boxer that anyone would like to see and helps anyone in need. 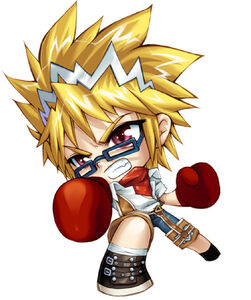 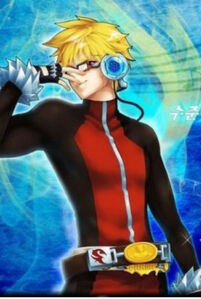 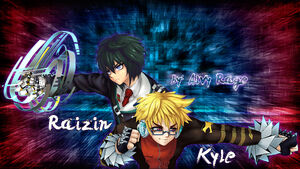 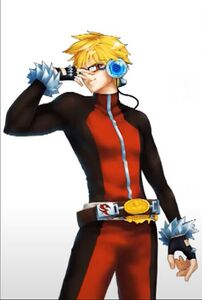 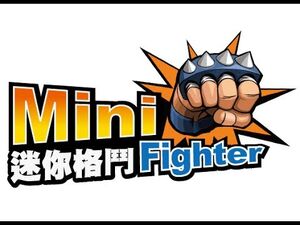 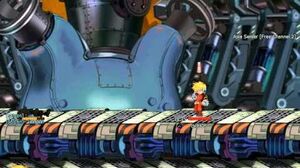 Mini fighter - Power Kyle-0
Add a photo to this gallery

Retrieved from "https://hero.fandom.com/wiki/Kyle_(Mini_Fighter)?oldid=2197066"
Community content is available under CC-BY-SA unless otherwise noted.