Protect his wife and mankind from his son, even if it means killing him (failed).

Kyle Breyer is the secondary antagonist hero of the 2019 superhero horror film Brightburn. He is the husband of Tori Breyer and the adoptive father of Brandon Breyer aka Brightburn.

He was portrayed by David Denman.

Much like his wife, Kyle had struggled to have a child to no avail. Eventually, in 2006, a meteor crashes to his and Tori's shared farm, and they find a young infant inside of it. Deciding to name him Brandon, the couple took care of the boy for 12 years until eventually they began to notice that Brandon was developing superhuman abilities such as superhuman strength.

Unlike his wife, Kyle began to realize that there was something gravely wrong with Brandon. One night, Kyle finds his son staring at the chickens whilst they were clucking in a panicked frenzy. After discovering all of his chickens massacred, he immediately implicates his adopted son as the culprit. His worries are skyrocketed when Brandon breaks the arm of his crush Caitlyn after she initially refused to pick him up on the grounds of him being a stalking pervert. From there, he realizes that his son was a threat to everyone around him, and he tried to figure out a way to prevent his son from harming anyone else.

Unfortunately, the next day, his friend Noah discovers Brandon at his home and goes to drive him home under the threat of informing Kyle and Tori about what he had done. After Noah is gruesomely murdered by his nephew, Kyle directly accuses his adopted son of the murder greatly angering him. While he was taking a bath, Kyle goes through his belongings and discovers Noah's blood-soaked shirt. Deciding that it was time to end his son's madness, Kyle and Tori orchestrate a "hunting trip" where Brandon would be shot by his father in a freak accident.

The next day, the plan commences, and while Brandon was distracted by animal tracks, Kyle readies his ammo and after placing the bullets into its chamber and fires. However, the bullet has no effect on his son. Frightened, Kyle scrambles to get more bullets into the gun only to realize that Brandon had quickly disappeared. Realizing that he was being hunted down by his son, Kyle attempts to flee but inevitably gets captured by him.

As he tried to reason with his son, Brandon fires lasers at him from his eyes, burning his father's face in until the back of his head explodes. 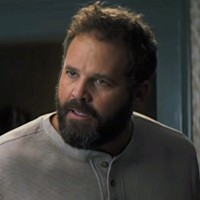 Kyle's death.
Add a photo to this gallery

Retrieved from "https://hero.fandom.com/wiki/Kyle_Breyer?oldid=1778879"
Community content is available under CC-BY-SA unless otherwise noted.