Defeating and killing the machines.

He was played by actor Michael Biehn in The Terminator and a scene in the director's cut of Terminator 2: Judgement Day, Jonathan Jackson and Skyler Gisondo in The Sarah Chronicles, the late Anton Yelchin in Terminator: Salvation (who also played Pavel Chekov in the J.J. Abrams Star Trek series), and portrayed by Jai Courtney in Terminator: Genisys (who also played Jack McClane in A Good Day to Die Hard), and Bryant Prince young in the same film.

In the original war, Kyle was born sometime in 2002, 5 years into the War. Apparently, his mother died in childbirth, while his father died when he was a young child. He quickly rose through ranks and he was a soldier, and he held a rank of a Sergeant in 2029. His official dog tag number is DN38416, and he works in the Tech-Com facility of the Resistance. He is one of personal soldiers to John Connor (who is also his son), and is often selected for personal infiltrator missions by John. He also assisted in stealing and reverse-engineering most of the Skynet technology, pulling raids on gunshops and stealing most of the laser-rifle equipment with his troops for the Resistance. His troops are also responsible for stealing the time-traveling technology that Skynet has developed. He personally volunteered for a one-way mission back to pre-apocalypse Los Angeles to save Sarah Connor, mostly because he has her picture of her given by John.

Once he had gone through, the time displacement equipment was destroyed, leaving only him and the Terminator in 1984. Arriving unarmed and not knowing what the Terminator looks like in its human disguise, Reese locates and follows Sarah Connor, shadowing her until the T-800 attempts to carry out its mission. He rescues her, warning her of the impending doom of the human race and of the future significance carried by her and her unborn son. Though initially hostile towards Reese, Sarah grows to trust and love him as he becomes the only thing between her and the Terminator. On the run from the Terminator, Kyle reveals that he volunteered because he has long been in love with Sarah, because John gave Kyle a picture of her.

Though battle-hardened and world-weary, Reese fell deeply in love with Sarah Connor, a woman he had never met and only knew through her photo. After Kyle tells Sarah of this history, the two consummate their relationship and Sarah conceives John. Kyle's life, however, is cut short when both he and Sarah are forced to confront the Terminator. After a high speed chase where he is wounded by gunfire and thinking that they destroyed the Terminator in an explosion of a fuel truck, they are again chased by the now bare metal endoskeleton inside an automated factory. In a final confrontation, the Terminator attacks Reese and delivers a mortal blow. Though dazed, Reese reaches for his last homemade pipe bomb, lights it, and wedges it in between the Terminator's pelvic strut and torso. The Terminator is blown apart, and Kyle is killed. The top half of the Terminator remains functional however, and it is left to Sarah to destroy it by leading it into a hydraulic press.

Michael Biehn reprises his role for a cameo in T2. Though it was cut from theatrical release, it was restored in the DVD version. When Sarah Connor is having a nightmare about Judgement Day, Kyle appears in a dream state version of her prison cell and reminds her of the coming danger, and the need to protect their son. However, as Kyle begins to walk out of the cell, Sarah desperately follows him only to be led to a courtyard of kids playing before they are killed by a nuke.

Kyle Reese is portrayed as a teenager by Anton Yelchin in Terminator Salvation. The film takes place in 2018, and it revolves around his first meeting with his future son John (Christian Bale). As a teenager, Kyle was the leader of the Los Angeles Resistance cell, even though it only consisted of two people. Because of this, he aspires to join the formal Resistance regulars, who mark themselves with a red stripe on their left sleeve, once he has "earned it".

It is clear that Kyle is immediately drawn to the charismatic figure of John Connor due to the fact that he leaves his Los Angeles base after hearing the latter's Resistance broadcast. Inspired by Connor's example, he frequently quotes segments of the broadcasts and adapts strategies that Connor suggests for taking down Terminators. He similarly shares a unique bond with Marcus Wright (Sam Worthington), who helps hone Kyle's strategies in close-quarters combat, whereas Kyle's lectures on what humans are fighting for reminds Marcus of his humanity.

In the film, Kyle's father had initially survived Judgment Day but died prior to the events of the movie, and Kyle is the primary target of Skynet due to its awareness that he would eventually travel through time to 1984 and become the father of John Connor. In the film, Kyle is already working with and protecting a child named Star (Jadagrace Berry) when the two later save Marcus Wright from a T-600 attack in the ruins of Los Angeles.

After Skynet captures him outside of LA, Reese, upon escaping, later worked with his future son building a bomb to destroy Skynet's San Francisco Command. The two also fought one of the first T-800 models together during this time. Connor took Reese into the Resistance with Star, granting him the promotion to Tech-Com regular. Kyle and John have begun developing a friendship as mentioned in the first film, evidenced by the way in which Kyle's promotion (signified by inheriting John's tactical jacket with red stripe) comes alongside his joining of John's inner circle at the end of the film.

He shows up again in Terminator: Genisys, where he is sent to go find Sarah, but later on Sarah dismisses that she needs Kyle to protect her now that the T-800 Guardian is doing the job. However, the T-800 Guardian claims that he is getting older and more obsolete, and therefore Kyle surely does become vital in protecting Sarah. 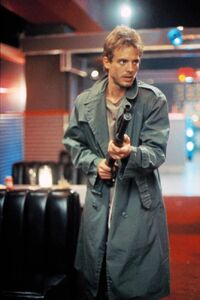 Michael Biehn as Kyle Reese in The Terminator. 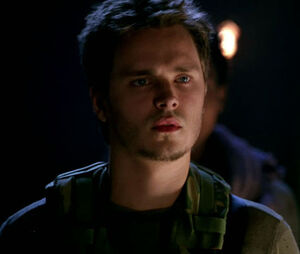 Johnathan Jackson as Kyle Reese in The Sarah Chronicles. 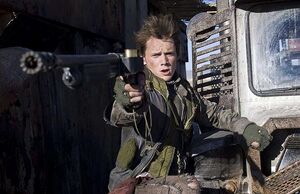 The late Anton Yelchin as Kyle Reese in Terminator: Salvation. 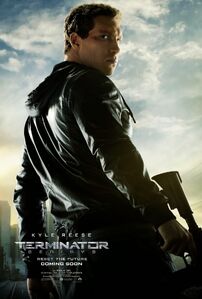 Jai Courtney as Kyle Reese as he appears in Terminator: Genisys. 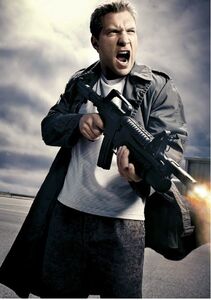 Bryant Prince as Kyle as a 12 year old in Terminator: Genisys.