Kyogre (Japanese: カイオーガ Kaiouga) is a Water-type Legendary Pokémon introduced in Generation III. It is the Version Mascot of Pokémon Sapphire and Pokémon Alpha Sapphire. It is a Primal Pokémon as well.

Along with Groudon and Rayquaza, Kyogre is a part of The Weather Trio.

Kyogre is a massive, predominantly blue Pokémon based on a whale. Its pectoral fins have white nails and designs on them that resemble the Greek letter "Ω" (Omega). Its chin is white, and it has two oval-shaped spots above both of its eyes and two white lines on both of its sides.There are red stripes around its chin, eyes, dorsal fins and torso, which glow when Kyogre is at its most powerful (in its regular form). Its tail is split into four parts that trail behind Kyogre when it moves, of which the outer ones are larger than the inner. Finally, it has small yellow eyes with black pupils and sclerae.

As Primal Kyogre, its body becomes a darker shade of blue, it gains yellow lines on its back and tail that form an Omega-like symbol on its snout, the spots above its eyes and the Omega-like markings on its pectoral fins turn yellow, and the red stripes on its body turn cyan.

Kyogre does not evolve. However, in Omega Ruby and Alpha Sapphire, it is capable of changing into its Primal Form via the Blue Orb. 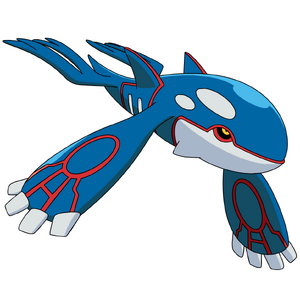 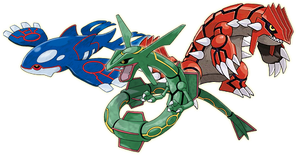