Kyou Fujibayashi is the female main character of the Clannad series. She is the older twin sister of Ryou Fujibayashi, the sister-in-law of Kappei Hiiragi and the close friend of Tomoyo Sakagami in the same year.

She is voiced by Ryō Hirohashi in Japanese and Shelley Calene-Black in English.

Kyou is the teenage girl who had a long straigh purple hair and striking purple eyes. Both parts of the hair who matching up, orming cat-shaped "hair arcs" that resemble the letter M, just like Nagisa Furukawa and Ryou Fujibayashi. She wears a ribbon-like hairpiece, is on the left lock of hair. She has a purple eyes, and Kyou cuts her hair to make Ryou feel better. And also she wears a the Hikarizaka Private High School uniform just like Kyou's friends.

Kyou is a aggressive and bold girl who fouled around can be decisive and reliable, who can stand her out as her younger twin sister look like underclassmen.

Kyou kind of person who she never getting boring, during her high energy and expressiveness, she can talk about who moving on Tomoya Okazaki.

She makes her popular girls better than the men, when she finds out getting upset once for all. Kyou's friends called her "Kyou-sama" (which means "Miss Kyou" or "Lady Kyou" in English), make Kyou banned her, occasionally follow her around, and exalting her. She is during her class representative during their second year.

She like to be joke with the people, who even indecently at times. The Fujibayashi twins was embodiment of a responsible, unlike her sister Ryou causes her to be highly protective of her.

She can be very serious and violent at times, when she will gets angry, she will tendency to throw various books towards, especially Tomoya or Sunohara.

Kyou is getting really jealous or envious, especially Tomoya who towards Tomoyo moreso than Nagisa. Then somehow of the reason and rivalry in strength.

Kyou takes her time during at school responsibilities probably serious, she start violates the school rules herself. She continuously bulling around at the school on her scooter, being despite violates are not allowed in the class. She has a pet boar named Botan, fill free around from the school ground.

Kyou doesn't well at school and the most of the athletic girls. She is a patient be athelete on the sports teams and enjoys being active.

Unlike her twin younger sister, she an perfect cooking, with the best course being pork cutlet. 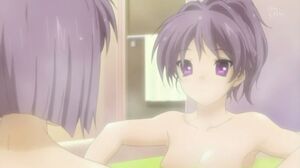 Kyou and Ryou taking a bath 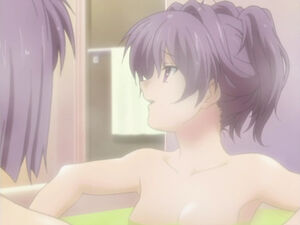 Kyou looks around while taking a bath 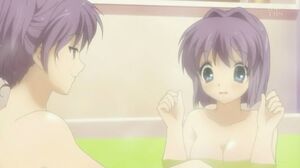 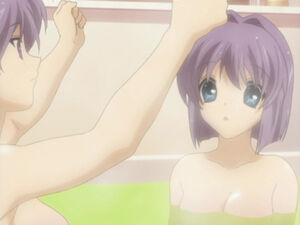 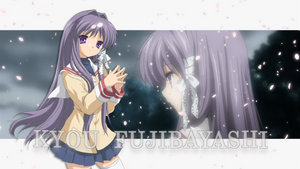