Kyubi is a fox yo-kai who's twice as tall as Nathan. (220 cm.), His fur is golden thick with white belly and paws. His chest is covered in a thicker patch of purple fur, surrounded by a yellow "trim" around its shoulders, with four wispy hairs sticking out. Kyubi has purple tipped nine tails and long nails. He has golden-tipped ears, and on its face are markings resembling a kitsune theatre mask. His face has tomoe eyebrows

In the anime, Kyubi has taken human form several times. In human form, he's a young boy the same age as Nathan. He wears a blue sweater vest over a white shirt and black shorts. His eyes are green and has grayish tousled hair, with two strands standing up. Sometimes when he gets excited his nine tails come out and the disguise starts to fail.

He's a little more inimical, but has shown to also comical. He has womanizing personality, but with a deception to harness heart energy.

Kyubi took part in the battle against the wicked in Yo-kai Watch the Movie. He's shown saving Manjimutt from a wicked. with a fire ball. He also helped fight against giant Dame Dedtime. 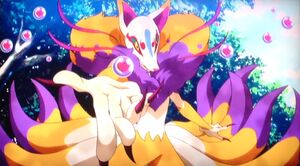 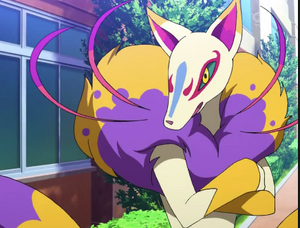 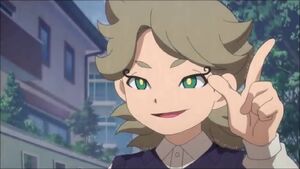 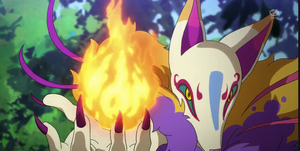 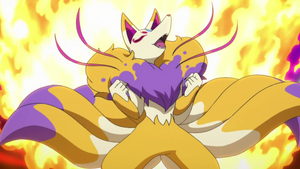 Retrieved from "https://hero.fandom.com/wiki/Kyubi?oldid=1698311"
Community content is available under CC-BY-SA unless otherwise noted.