Kyurem is a Legendary Dual-type Dragon/Ice Pokémon introduced in Pokémon Black 2 and Pokémon White 2. He also appears in the fifteenth Pokémon movie, Kyurem vs. the Sword of Justice. In the movie, Kyurem is voiced by Marc Thompson. While Kyurem is initially an antagonist, it becomes a hero when it tries to save the heroes from being killed by its collapsing lair.

In the movie, Kyurem lives in Full Court, an abandoned mining complex in a mountain. It lives in seclusion and rarely interacts with the outside world. Its solitude is interrupted when another Pokémon, Keldeo, challenges it to a battle in its mine. Kyurem seems to be uninterested in the fight, asking Keldeo if he believes he is worthy enough to fight a creature as powerful as Kyurem. Keldeo manages to get the Dragon's attention when he claims that he is a Sword of Justice, which is actually a lie. Kyurem accepts Keldeo's challenge. Since Keldeo lied about being a Sword of Justice, he wasn't ready or strong enough to fight Kyurem. Unsurprisingly, Kyurem easily overpowers Keldeo, and even manages to break his horn off in the process. During their battle, the real Swords of Justice entered Full Court and attempted to call off the fight before Kyurem eradicated Keldeo, only for the Ice Dragon to freeze them solid. Keldeo succumbed to his fear of the Dragon and fled. This angered Kyurem, and made it relentlessly pursue Keldeo. Its search leads it to find an almost unconscious Keldeo on a train. Ash, Iris, and Cilan help Keldeo flee from it by running across the tops of the carts until Kyurem is forced to jump off the train as it enters a tunnel.

Keldeo admitted to Kyurem that he lied about being a Sword of Justice and did so in order to do battle with the Boundary Pokémon, but Kyurem revealed that it already knew that Keldeo was a liar from the start and then demanded that they ended their battle. Through Ash's support, Keldeo transformed into his Resolute Form and proceeded with his battle against Kyurem, with the Boundary Pokémon still proving to be too much for Keldeo. As it seemed that Kyurem won the battle by freezing Keldeo solid using Freeze Shock as Black Kyurem, Keldeo broke free and was able to learn a move called Secret Sword, and with it, the Colt Pokémon landed a direct hit on Kyurem.

Pleased by this turn of events, and witnessing Keldeo's true power, Kyurem attacked at full strength by unleashing another Freeze Shock attack, which Keldeo blocked, but caused the attack to threaten Ash, Iris, Cilan, and the now freed Swords of Justice. Keldeo leaped in and split the Freeze Shock in half with Secret Sword, preventing the attack from hitting his friends, but took major damage in the process. This resulted in the Colt Pokémon collapsing, and Kyurem pinned Keldeo down by his horn. The Colt Pokémon admitted defeat, but instead of finishing the battle, Kyurem reverted back to its normal form, impressed that Keldeo chose to protect his friends over winning the fight, earning Kyurem's respect. When the mines began to collapse from the damage they sustained from the battle, Kyurem changed into White Kyurem and simply froze the collapsing pieces into place, preventing the destruction of the mines and creating an ice castle to live in, while the Swords of Justice, Keldeo, and the others escaped to safety. Kyurem then shifted back into its normal form and lumbered back into its lair without a word. 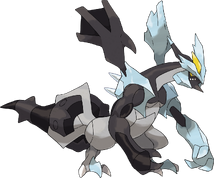 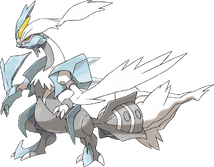 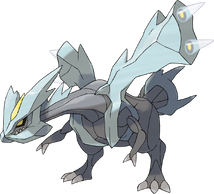 Kyurem proud of Keldeo for protecting Ash and his friends after the battle.