Heroes Wiki
Register
Don't have an account?
Sign In
Advertisement
in: Tom and Jerry Heroes, Damsels, Rebellion Heroes,
and 6 more

La Petite Ballerina is a one-time character who appeared in the holiday film, Tom and Jerry: A Nutcracker Tale. She first appeared when Jerry is magically granted his wish to dance one Christmas Eve Night and the toys come to life, whisking Jerry and his baby nephew Tuffy off to a enchanted kingdom, where she danced with him upon their first meeting and she, Jerry and the toys enjoyed an nice welcoming dinner until the alley cats lead by Jerry's arch-nemesis, Tom Cat, who serves as the captain of the guards for the the evil Cat King, suddenly came crashing the party and capturing all the toys.

Jerry, along with a horse named Nelly and a Christmas ornament elf named Paulie tried to put a stop to this, but they were shot out of a cannon named Tom, and La Petite Ballerina was later imprisoned in a birdcage by Tom, and brought to the castle to the Cat, where he simply asks her to dance for him, but she shoots him down.

When Tuffy arrives with a string of keys to set her free, she tells the young mouse to go warn Jerry about Tom and his army of alley cats who are out to stop him and his friends from reaching the star to the Toymaker while she frees herself. She manages to distract the Cat King and keep him busy with the string of keys long enough for Jerry and his friends to reach the star and the toymaker.

Later in the film, La Petite Ballerina leads all the captured toys against the army of cats into rebellion during the battle. The battle is won, however, she and Jerry are nearly crushed by a falling backdrop, but Nelly sacrifices herself to save them, taking the impact herself. She dies from the injuries, causing Jerry, Tuffy and the toys to mourn for her.

La Petite Ballerina held prisoner by the King of the Cats 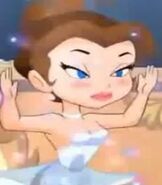 La Petite Ballerina facing the King of the Cats