NOTE: This article is about the incarnation of Lady from the 2019 movie. The mainstream version can be found here: Lady (Animated).

The Center of your People's Universe
Precious Little Angel
Theif

Being with Tramp, hanging out with her neighbors, howling with the Tramp.

Lady is the pet of Jim Dear and Darling, the wife of Tramp, the titular female protagonist of the 2019 remake of Lady and the Tramp. She is a lovely and elegant cocker spaniel.

She is voiced by Tessa Thompson, who also portrays Valkyrie in Thor: Ragnarok and Avengers: Endgame.

Lady was adopted by Jim Dear and Darling on Christmas Day. After that, she went into bed that day because she comes to Jim Dear in his bed. And when Lady got up, she was all grown up. She and her neighbors Jock and Trusty when no one came, a rat came in to sneak around the house, and Trusty was awake. She was telling him about the rat he saw.

The Tramp came in to her, she tried to bark at him because she was too late, Elliot a dogcatcher came in to see if the tramp was a stray dog. The Tramp was talking to Trusty afoot while Jock was mad at him. Lady saw a doctor when Darling gave birth to a baby when she was born, and he saw him looking down to her. When Darling was singing a lullaby with the baby when she was born, and Jim saw Lady barking at her, because she was preoccupied. But Lady saw Trusty in the house with his owner having breakfast, and Jock was wearing a costume, and her owner taking a picture. After that, she saw the rat again. And then, Jim came in to tell her about how the baby is sleeping.

When Aunt Sarah came in, while their owners were about to be gone and Sarah did not get to hold Lulu. When Lady saw their owners leaving on a tour, they are about to come back. After that, the cats came in to sneak around and sing everyday while they’re just playing around because Aunt Sarah was displeased with her.

Aunt Sarah took inside the Pet Shop with Lady and has a muzzle put on her, but she ran away when traffic came in and started her and went in to a safe place. But when a stray dog named Isaac trying to sneak around with her, and trying to steal his food, and the Tramp came in because he needs to stop when Lady was shocked. When the Tramp helps her stare at Isaac, she gets rabies everywhere. And then, Isaac was frightened and ran away. And the tramp helps her get the muzzle off her face, and pulls off a statue of a beaver. And then, Lady tries to get home because Tramp came into her. He gave Lady a lesson about the cars to pass.

They took a long walk to the streets while they were taking a shortcut. Then she saw Elliot that he was talking to the guy over there. And then, Tramp jumps on to the riverboat, and Lady was too frightened to jump, but she got on the boat. The Tramp was on the rooftop while Lady was on it with him, they saw a a lot of people and musicans playing in the jazz, and singing with the band.

After that, they were hanging around at Tony's restaurant with a music of romance song, and spend some time on a visit far from a view, and Tramp howled at the moon and she howled with her too. And after the view, Elliot takes Lady to the dog pound. Lady saw Peg and Bull and there are pound dog friends Chance and Dame, they were lost in the pound and she started singing a jazzy toon. After he was with Lady, Jim Dear and Darling took her home and Jock and Trusty are eventually back alive while they are safe. After Lady was asleep, she continued howling at the moon. Lady was talking to the Tramp about howling at the moon.

Lady saw a rat trying to get Lulu’s attention when Tramp defeated him. And Elliot caught him because her friends are saving him from the Dogcatcher and Lady barked at her on a stop and Tramp was injured and hurt because of her friends that he was awake, the Tramp was newly adopted by Jim Dear, and Lady took her home. When Christmas arrived, Lady and Tramp sat with Jim and Darling by the christmas tree in the end. 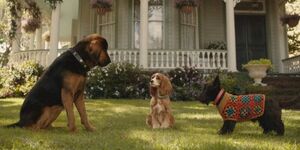 Lady with Trusty and Jock

Lady meets Tramp after she has not revealed his presence to her owners.

Lady with Devon and Rex.

Lady while Tramp tries to remove the muzzle.

Lady and Tramp shy after their accidental kiss.

Lady and Tramp on the Hill.

Lady at the pound.

"You have value to me. I missed you."

Lady happy that Tramp is part of the family.