Take revenge on Arkham for killing her mother.

Lady was born as Mary to Arkham and an Kalina Ann. At some point, Arkham killed her mother for reasons unknown to her, leading her to abandon the name he gave her. She developed a blinding hatred for her father, and for all demons, whom she blamed for corrupting her father. She swears to hunt every last demon to extinction.

When her father and the half-human son of Sparda; Vergil, raise Temen-ni-gru, Lady attempts to infiltrate it to kill her father, manually climbing it. On her climb, she encounters Dante, Vergil's twin brother, who has come to stop his twin and Arkham from opening a portal to the demon world. She fires a missile at him, but he simply rides it like a skateboard, changing its trajectory into the wall. Lady enters the hole and continues to make her way up the tower, choosing a different path up than Dante.

When approaching the top, she encounters her father, and tries to kill him. He manages to toss her off of the tower, but she is saved by Dante who grabs her ankle as she is falling. She repays him by shooting him in the head, causing him to drop her. She jams the blade attached to her canon into the wall of the tower to keep from falling, and when Dante yells at her for shooting him, she shoots at him again, only for him to catch the bullet with his teeth and walk away.

Lady presses on, and barely survives the Leviathan almost falling on her. Dante emerges from one of its eyes, and the two talk briefly before being attacked by demons. Dante eventually leaves her to fight the demons on her own.

She eventually finds her father, seemingly dead, with Dante standing over him. Angry, she asks if he killed him, to which he only responds "So what if I did?". Lady flies into a rage and shoots at him, only to have him evade and counter every shot. She explains that Arkham is her father, and that it was her duty as his daughter to kill him. Dante leaves, and Arkham awakens. He tells Lady that he was manipulated by a demon into killing his wife, and blames Vergil. He then seemingly dies, leaving Lady weeping over his body and swearing revenge on Vergil.

Lady finds Vergil fighting his brother and joins in the fight. The three of them are ambushed by Arkham, in his alter-ego Jester. He reveals his true identity, and disarms them, and proceeds to explain that he manipulated all of them into fighting there, since they are keys to opening the way to the demon world. He needed the medallion and blood of Sparda (possessed by Dante and Vergil) and also the blood of the priestess that Sparda sacrificed the seal the tower; which Lady, as the descendant of that priestess, possesses. He stabs her in the leg to draw her blood and the tower begins to open. He easily dispatches of Vergil, Dante, and Lady, and successfully activates the tower. Lady again moves to kill him, but Dante follows her, believing that she is no match for him.

Dante catches up to her in the Divine Library, and Lady tries to stop him, telling him that Arkham is none of her business. Dante refuses to let her go, and the two fight, with Dante winning. Dante tells her that everything started with his father, which is why he should be the one to end it. Lady accepts this, and gives Dante her rocket launcher: Kalina Ann, named after mother. She later catches a glimpse of Vergil ascending the tower.

After Arkham acquires the full power of Sparda and is transformed to a monster, Dante and Vergil defeat him, and once again human, he falls back into the human world. Lady finds him broken and bloodied, and draws her gun at him. He once again pleads for mercy and claims innocence, but Lady, knowing that her father will just trick her, shoots him several times. She then cries afterwards.

Lady catches up with Dante after he has saved the day and closed the portal, dooming his brother in the process. As she sees Dante shedding tears for his brother, she remarks that perhaps even a "devil may cry" at the death of a loved one. Their moment is interrupted by the arrival of demons left over in the human world, and the two fight them together. Ultimately, the events with her father and Dante teach Lady that there demons like Dante in the world that are capable of great good, just as there are humans capable of evil greater than any demon. Dante names his newly opened shop "Devil May Cry" in her honour.

Devil May Cry: The Animated Series

Lady continues to pursue a career as a solo demon hunter, sometimes calling upon Dante for help or to demand the money that he owes her. She eventually encounters another of Dante's associates; Trish, a demon in the appearance of Dante's mother. She at first hunts Trish, believing her to be responsible for controlling demons into attacking people in a town, but after realizing that she had been manipulated into fighting Trish, the two team up to take down the demon that tricked her, and grow to like each other.

Lady was responsible for bringing the events in Fortuna to Dante and Trish's attention, telling them about the Order of the Sword, who worshipped Dante's father Sparda, and that they had been stockpiling demonic power.

After the job is done, Lady gives Dante and Trish their payment, which Trish complains is too little. Lady retorts that things in Fortuna escalated because of Trish. She then accompanies Dante and Trish on their next mission.

Lady is fierce, rough, and tough, more than a match for Dante, who describes her as "psychotic." She has a softer side as well, shown when she cries when the "dying" Arkham tricks her into thinking that Vergil possessed him and when she kills her father for good, despite all of the atrocities he committed, and what he did to Lady and her mother. She seems to have shown some regret in killing her father, telling Nero, "It's true. You'd never recover from that", after Nero learns that Vergil is his father.

She was originally driven by a vast hatred for all demons, and anyone associated with them, believing that they were pure evil. Her experiences with Dante would cause her to soften her views and realize that demons were as capable of both good and evil as humans.

She appears to be younger than Dante, wearing a schoolgirl outfit when first hunting for her father.

She has dark, chin-length hair that flows down on both sides of her face, with a fringe that reaches her eyebrows.

Like her father, she has the genetic defect of heterochromia, which causes her eyes to have different colours. Her left eye is red, and her right eye is a blue-ish green. She sometimes wears sunglasses to hide her mismatched eyes.

Lady makes an appearance in Project X Zone. She is a support character for any of the playable characters.

A woman in the same line of work as Dante. Very direct, she never backs down. Though she is mortal, she boasts phenomenal physical prowess, as well as incredibly precise handling of her beloved missile launcher, Kalina Ann. "Lady" is a nickname given to her by Dante when she initially refuses to give him her true name, which is Mary. She infiltrated Temen-ni-gru in order to take revenge for her mother, slain by her father Arkham in his attempt at becoming a demon. Her strong desire to destroy the demons for herself initially puts her at odds with Dante, but eventually she entrusts him with the destruction of her father. 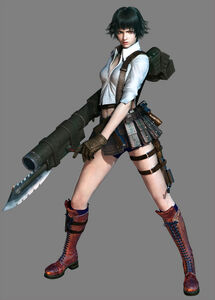 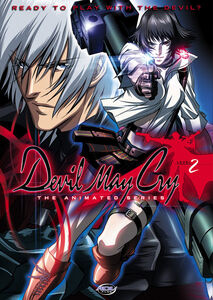 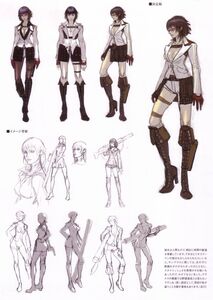 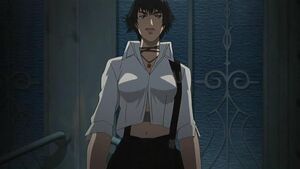 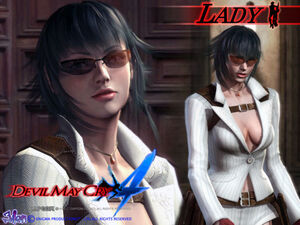 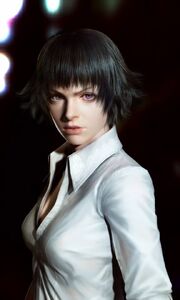 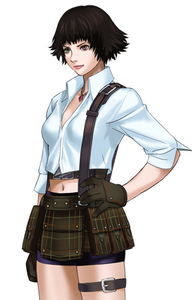 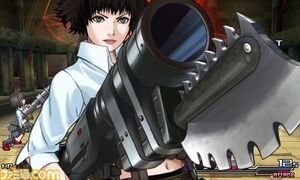 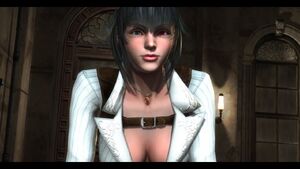