Heroes Wiki
Register
Don't have an account?
Sign In
Advertisement
in: Article stubs, Mario Heroes, In Love,
and 21 more

Owner of the Boo Mansion.

Leader of the Boos in Boo Mansion and Gusty Gulch.

Help Mario to rescue the Star Spirits. (both succeeded)

Lady Bow is the leader of the Boos in Boo's Mansion in Paper Mario. She was also one of the few partners in the Paper Mario series to make an appearance in another Paper Mario game.

Bow crosses paths with Mario when he arrives at the mansion looking for a Star Spirit. Bow, in fact, had the Star Spirit. It had escaped from its prison at Tubba Blubba's Castle only to be captured there.

Bow told Mario that if he wanted the Star Spirit, he'd have to defeat Tubba Blubba, who had been eating the Boos. Bow decided to go with Mario, and when he succeeded in ridding the Boos of Tubba Blubba, she still accompanied him.

In Paper Mario: The Thousand-Year Door, after the player has finished the game, Bow can be seen in Poshley Heights, alongside Bootler, and in Super Paper Mario, she appears on a photo inside Mario's house in the intro cutscene, on a poster in Fort Francis, and as a Catch Card obtained on the Flopside Pit of 100 Trials' sixtieth floor.

Bow has the ability to make Mario invisible, allowing them to avoid detection and from being harmed. In battle, she is able to smack an enemy, scare them away from the battlefield, or hit them with her fan. 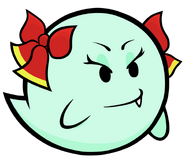