Lady Juliana is Kayley's mother and the wife of Sir Lionel, one of King Arthur's knights. Nurturing and resourceful, she wants what is best for her family. When Sir Lionel is killed by the evil knight, Ruber, Arthur sympathetically grants Juliana unlimited access to Camelot; Ruber later plots to use this to his advantage. After Sir Lionel's death, Juliana forbids Kayley from pursuing her dream to become a knight, not wanting to lose her as she lost her husband.

Ten years later, Ruber invades their village and takes Juliana prisoner, intending to use her to sneak into Camelot. While he gloats, Juliana secretly tells Kayley to go to Camelot and warn Arthur. Even in captivity, Juliana stands up to Ruber's monstrous henchmen.

Later in the movie, Ruber captures Kayley to use as leverage over Juliana and successfully invades Camelot. During the final battle, Juliana stays behind in the castle court while Kayley sets off to confront Ruber, finally defeating him for good. In the end, Kayley is finally knighted, and Juliana praises her. 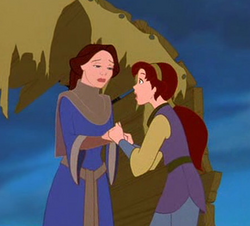