Klucky (By Maid Marian)
The Fat One (by Prince John)

See to that Maid Marian's needs are fulfilled.

Lady-in-waiting
Lady Kluck (aka Klucky) is the obese and muscular lady-in-waiting of Maid Marian in Disney's Robin Hood. She is depicted as a hen to match her name. Despite being seen crocheting, she is sort of like a tomboy, as despite having sent her boss away for her own safety as a certain position is "no place for a lady" she fights off the guards with her own strength, and later, she knocks down Prince John's rhino guards in the style of American football.

She was voiced by the late Carole Shelley, who previously voiced Amelia Gabble in The Aristocats.

Lady Kluck is Maid Marian's lady-in-waiting. She is first seen playing badminton with Maid Marian as a rabbit named Skippy tries to retrieve his arrow which accidentally fell into Prince John's courtyard. Then, she and Maid Marian greeted Skippy and his sisters, Sis and Tagalong, and their friend, Toby the turtle. When they tell Lady Kluck and Maid Marian about Robin Hood, Lady Kluck plays as Prince John as she fights against Skippy, who plays as Robin Hood. As she fakes her "death", she points out for Skippy to take Maid Marian to a small place surrounded by trees which they call "Sherwood Forest". Later, she appears with Maid Marian at their room, telling the latter that love takes time and suggests her to be patient.

Later, when Robin Hood and Main Marian stroll through the forest during the song "Love", Lady Kluck, along with the other citizens and Robin Hood's friends, appear to cheer Robin Hood. Soon after, Little John sings the song "The Phony King of England", which mocks Prince John as everybody laugh at him. During this song, Lady Kluck dances with Little John.

Lady Kluck and Main Marian do not appear after the song ends until the ending, where they last appear the ending, where Robin Hood marries Maid Marian after King Richard returned and Prince John was put in jail along with Sir Hiss and the Sheriff of Nottingham for their crimes against poor people. Lady Kluck is last seen tearfully watching Maid Marian getting married to Robin Hood. After this, they all lived happily ever after. 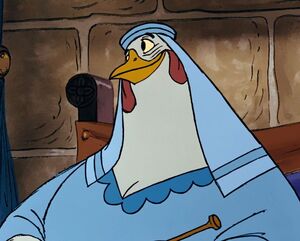 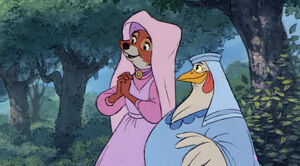 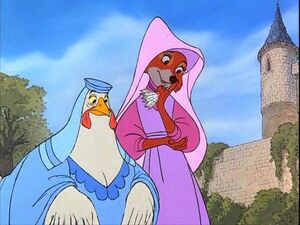 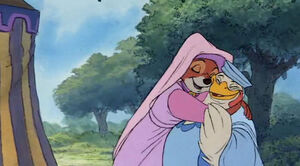 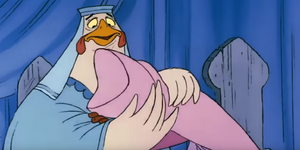 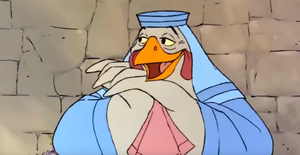 Lady Kluck, as she is tearfully watching Maid Marian getting married to Robin Hood