Lady Rainicorn is a female Rainicorn and is Princess Bubblegum's royal steed, best friend, and companion. She is also Jake's girlfriend, and sometimes follows Finn and Jake on their adventures. She speaks only Korean, using English only when equipped with a universal translator device (however, she is shown to have spoken a bit of English in "Lady & Peebles" "I am pregnant!"). Princess Bubblegum, Lady's children, and Jake are the only other beings in the Land of Ooo, besides Lady's parents, that are shown to understand Korean. Finn directly refers to the language she speaks as Korean in "The Pit." In "Lady & Peebles," Lady revealed that she is pregnant; this was confirmed by Princess Bubblegum. In the episode "Jake the Dad" she becomes a mother to five rainbow puppies.

In the version of the program that is broadcast in Korea, Lady Rainicorn's dialog -- along with that of all the other characters -- is in Korean, but the narrative nonetheless presumes her to be speaking a different language from the other characters, and her voice has both reverberant and polyphonous qualities added to it in order to differentiate it.

Somewhat interestingly, the exact phrasing of Lady Rainicorn's lines often varies somewhat between the American and Korean versions of the program. For instance, in the American version of the episode "Jake Suit," when Jake arrives at their home while controlling Finn's body, Lady Rainicorn asks Jake in Korean, "Why are you in Finn's body," while in the Korean version of the episode, she asks of Jake in the same line of the same scene, "Why are you in Finn's throat?"

Lady is a long unicorn like creature. Her body shares the same colors as a rainbow (excluding orange): red, yellow, green, blue and violet. She has a blonde mane, and big round eyes the same as Jake's. She also has a single white, sharply pointed horn. Her mother has a long body like hers, unlike her father. This means that she inherited her length from her mother, since in the episode "Her Parents" her mother and father do not find it odd that Jake can stretch or is long like the females before they know he is a dog. In "Five More Short Graybles" and in "Up a Tree," Lady sported a "baby bump" around the middle of her body, indicating her pregnancy.

Lady has the ability to fly, phase through walls, and can use her horn to change the color of anything she wants. In the episode "My Two Favorite People," Lady Rainicorn explains to Finn that she can fly because her body can intercept beams of reflected light from the sun and "dance around" on them. In the same episode, she is shown to live in a stable in the Cotton Candy Forest. Like her parents, she can fire a chromatic light beam from her horn, which seemingly hurts. Also, Lady can stretch longer or shorter as you can see when she lands. She may have limited Stretchy Powers. It is revealed in "The Creeps" that she can phase through walls and carry people while phasing. People can phase through her body, also shown in "The Creeps." She can also play the viola, like her partner Jake.

Lady is laid-back and likes to interact with Jake and Princess Bubblegum. She is considered Princess Bubblegum's companion, like Jake is Finn's companion. She does not speak Korean in the original short; she only makes soft cooing sounds (or, near the beginning, hysterical screaming coos). Jake understands what she says when she talks to him, and she believes she is smarter than Jake. She may also have a fondness for power rings, which she wears by phasing them into her body since she lacks fingers. Jake calls her "The Rowdy Queen," saying that she can do anything.

Lady, unlike both of her parents, does not wear a universal translator device. It is worth nothing, since Lady understands English, but either barely speaks it or chooses not to. This is obvious because of the fact that neither Jake nor Princess Bubblegum speak Korean very often when talking to her. Though in the episode "My Two Favorite People" Jake translates Finn's jokes to her from English to Korean. The reason Jake doesn't translate Lady's joke to Finn was because it was about the two of them running naked through a farmers field and not because it doesn't translate well to English. 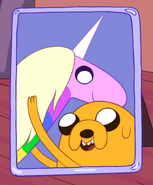 Rainicorn and her son T.V.
Add a photo to this gallery
Retrieved from "https://hero.fandom.com/wiki/Lady_Rainicorn?oldid=1711836"
Community content is available under CC-BY-SA unless otherwise noted.