To get into Caltech (succeeded).

Mary Bromfield is a major character in the DC Extended Universe. She made her debut as the tritagonist of Shazam! and will appear in its sequel Shazam! Fury of the Gods.

Mary is the eldest of the orphans living in the Vasquez household and is often regarded as the level-headed and kind-hearted leader of the group.

She is portrayed by Grace Fulton. In the first Shazam! film she was portrayed by Michelle Borth as the superheroine Lady Shazam however Fulton will take over this role from 2023 onwards.

At some point in her childhood Mary was adopted by fellow orphans Victor and Rosa Vasquez and was raised by the two throughout the years. Over the course of the following years Mary would become introduced by the following children to be adopted by her foster parents including Freddy Freeman, Darla Dudley, Eugene Choi and Pedro Pena. Mary grew up getting good grades in school and was an exceptional student until the point of her final year in which she got accepted into Caltech University.

Mary first appears when Billy Batson arrives at the house with Victor and Rosa while doing a phone call interview with the university, she pauses the call briefly to greet Billy into their home before returning to the interview. Afterwards Mary is present at Billy's first family dinner in which she accepts him gleefully into their home along with her siblings.

The following day, Mary and her siblings are preparing to return home from school before the brothers Brett and Bruke Breyer begin beating Freddy to a pulp, although Mary and the others try to intervene the bullies are unphased and the siblings can only watch on in horror at their brother's attack before suddenly Billy shows up and successfully beats the bullies down with Freddie's cane before being chased off by the two leaving Mary and her siblings worried. She is seemingly relieved when he returns home that night.

A few days later Mary received an accepting letter into the university and becomes conflicted about her feelings on leaving her family for college. Conflicting thoughts plague Mary's mind before eventually becoming overwhelmed and breaking down on the high street. Billy (in his Shazam) form notices her and heads down to see what's wrong, accidentally slipping his cover up on two occasions in the process. During the conversation Mary reveals to Shazam that she's happy she got into university but doesn't want to leave her family behind, when questioned by him about this she explains to him her view on the importance of her family and how much her foster siblings and parents mean to her. This event sparked a curiosity in Mary about Shazam's identity which was later strengthened by her observation of an argument between Freddy and Billy at dinner.

After Shazam's disastrous battle against Dr. Sivana Mary catches the news report featuring Shazam and Freddy having an argument next to a bus wreck and Mary comes to the conclusion that Billy is Shazam, around this time the other children reveal that they have found the location of Billy's biological mother prompting to him to go to her home and confront her in spite of Mary's protests.

Soon after Billy leaves Dr. Sivana shows up at the house alongside the Seven Deadly Sins and Mary quickly rushes to shield her siblings while he decides to hold them captive until Billy returns. Once Billy comes back he has a brief kerfuffle with Sivana before surrendering himself and allowing Sivana to take him back to the Wizard Shazam's lair to transfer his powers. Mary and the others follow him however and after Freddy throws his replica batarang at Sivana's head Mary quickly picks up on the fact that once the sins aren't fused with Sivana he is no longer invulnerable and can be injured.

This prompts the family to escape and they begin rushing around the city to evade Sivana's grip. Eventually they head for the carnival near the boardwalk and try to blend in with the crowd there. Soon after this Billy uses the Wizard's staff to give Mary the power of ancient goddesses, turning Mary into Lady Shazam, a heroine with superhuman strength, superhuman speed, superhuman intelligence, enhanced fighting skills, and the ability to control lightning. Mary then helps her siblings fend off the sins until Billy defeats Sivana and they return to the wizard's lair. They decide to take the lair as their own for their superhero operations and return home.

The following day Mary and the others join Freddy in school for lunch only to be joined by both Billy in his Shazam form as well as Superman.

Mary is a very intelligent, caring and kind-hearted girl with a large amount of empathy and love for her adoptive family in her heart, she is also a very friendly and outgoing individual who is accepting of many people in her life as friends. This also makes her strongly protective of her family's safety and she is very weary to let them in harm's way.

Mary is a fair skinned pretty girl of average height with long brown wavy hair. She is always seen wearing warmer items of clothes such as long sleeved shirts, comfy sweaters, jeans and skirts with tights and black leather boots. When she is outdoors she is often seen wearing a red winter jacket with a furry hood. In a few scenes she is also seen wearing a pink beret.

In her superheroine form she appears slightly older and with darker hair and wears red dress with short sleeves and a giant lightning bolt symbol in the center, on top of this she also wears a pair of long white boots and a white hooded cape in this form.

Mary as Lady Shazam and the Shazam Family 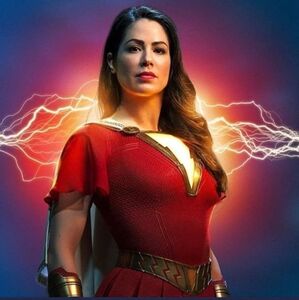 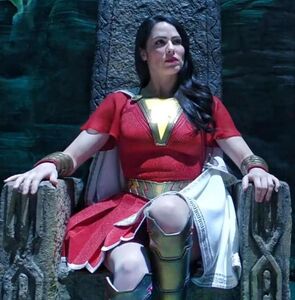 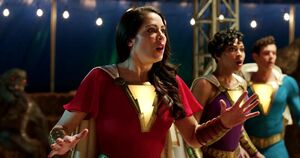 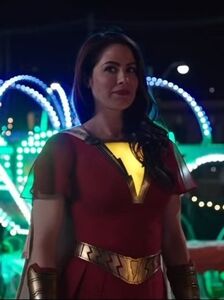 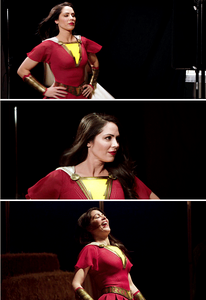 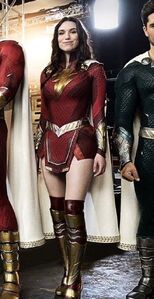 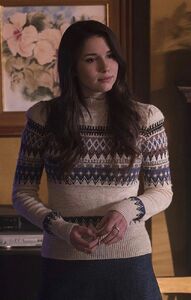 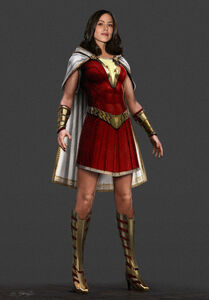