M.T (by herself and Jesse)
Gambit
Sliver (by Agents Mace and Sieve)

Make her own identity and escape the Infinity Train (succeeded).

Rebellious Reflection
Lake (formerly known as Mirror Tulip, or M.T for short) is a major character of Infinity Train, appearing as a supporting character of Book One - The Perennial Child, and the main protagonist of Book Two - Cracked Reflection. She is the mirror version of Tulip Olsen.

She is voiced by Ashley Johnson, who also voices her prime Tulip Olsen and also voices Ellie in The Last of Us and its sequel, Terra in Teen Titans (2003) and Teen Titans Go!, Jinmay from Super Robot Monkey Team Hyperforce Go!, Gwen Tennyson in Ben 10: Alien Force, Ben 10: Ultimate Alien, Ben 10: Omniverse, and Renet Tilley in TMNT 2012.

When not reflecting Tulip, she has an appearance as metallic. Unlike Tulip, she doesn't need glasses to see properly, and her hair was longer but is cut shorter after a narrow escape from the mirror agents who threatened to kill her. She also has a portion of Tulip's Swiss-army knife on her arm, allowing her to move freely in the prime world by having the mirror reflect on itself.

In Book Two, Lake makes further changes to her appearance. Upon removing her mirror clothing, She wears a bracelet that she created from a pen chain from the Pencil Bank Car that she spray-painted black. She wears jeans and a black shirt with the sleeves ripped off. She wears brown boots, one of which she hides Tulip's Swiss-army knife inside. She drilled holes into both of her ears and by using one of the train cars wheels, shaved all her hair off and in the process, a small part of her eyebrow.

Lake tries to distinguish herself as much as possible from her Prime World counterpart. She's at first bitter about having to spend her life reflecting everything Tulip does, and has a dislike of coding to completely contrast Tulip's love of it. She's also much more open about needing help than Tulip is, a trait which she calls out Tulip on. She also finds the Pencil Bank Car incredibly interesting, in contrast to Tulip finding it boring.

It shown in Book Two that Lake maintains a strong belief that everyone should be free to make their own choices. This displayed when Lake becomes angry after Jesse tries to come up with a name for Alan Dracula, without its consent. 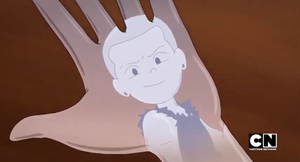 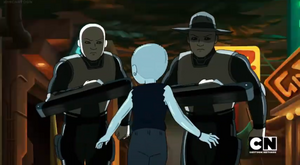