Protect Ling at any cost.

Lan Fan is a supporting protagonist in the anime/manga series Fullmetal Alchemist. She is one of two bodyguards of Ling Yao and the granddaughter of Ling's other bodyguard, Fu. She is very quiet and cares deeply for Ling. As a result, she is constantly thinking of his safety and often forgets her own.

Lan Fan is an attractive young lady with back-length black hair usually tied back in a bun with the bangs loose and framing her face, dark brown eyes, and a lean, muscular, and fairly curvaceous figure. Her usual attire consists of a black Xingese secret soldier uniform covered by a layer of body armor. On her hands and forearms, she wears fingerless gloves with forearm/hand protectors lined with small spikes along the knuckles. Lan Fan usually keeps her face hidden on missions behind a red and white mask with the Yin half of the Yin-Yang symbol on the forehead (Fu's mask bears the other half).

After losing her left arm on the battlefield, Lan Fan has a combat automail replacement built for her while abroad. It is gunmetal-colored and its shoulder attachments are shielded by what appears to be a steel variation of Xingese plate armor. For combat, it is adorned with a spike strip wound around the hand as well as a long sword blade extending from the bottom of the elbow.

Usually quiet and shy (when unmasked) in Ling's presence, Lan Fan generally keeps to herself unless prompted. And like Edward, she has a propensity for being brash when angered. Her determination and loyalty can also be blunt almost to a fault whenever Ling and his goals are involved. She worries incessantly about the young prince wandering off constantly and will be found watching him more often than not.

She is known for not just her creativity and skill on the battlefield, but also for her undivided loyalty to a cause she deems worthy to fight for.

Ling Yao - As a clandestine soldier and retainer of the Yao clan, Lan Fan's duty to protect Ling is in her very blood, passed down her family line for generations. In that vein, her devotion to the young lord's safety and well-being is remarkable and she is more than willing to tend to his every command and sacrifice her life and body to protect him. However, despite this being part of her sworn duty, Lan Fan's adherence to Ling seems to border on the amatory, with the young girl becoming unnaturally flustered when unmasked in his presence and recklessly angry when he is insulted by others, and not denying that he is "very special" to her, when asked by Van Hohenheim.

Fu - Fu is Lan Fan's grandfather, who is also a bodyguard for Ling, and is often found accompanying Lan Fan.

Lan Fan is an extremely skilled combatant, well-versed in the use of Xingese martial arts in both armed and hand-to-hand styles. She has been shown to be able to easily overwhelm a seasoned combatant the likes of Edward Elric and inhuman beasts like the Homunculi. Like most skilled Xingese warriors, she has the ability to sense other people's Qi, giving her an edge in battle and the ability to identify the Homunculi, whose life energy is twisted by the large number of souls trapped inside them. Lan Fan herself is particularly skilled in the use of kunai and quite partial to the use of explosives in combat. Her skills are further enhanced with her Automail which has a unique large blade protruding from the elbow, in which she was able to nearly kill the Homunculus Gluttony by herself with ease, attacking him numerous times before he could react. 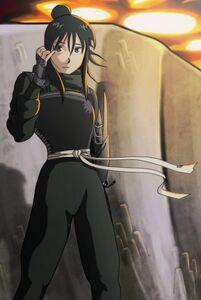 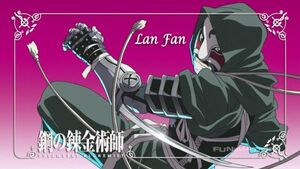 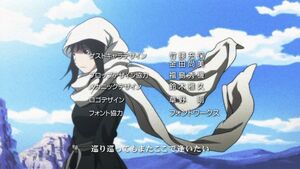 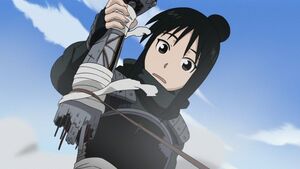 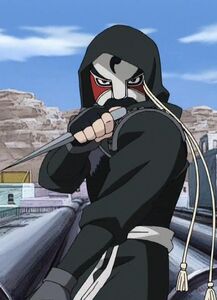 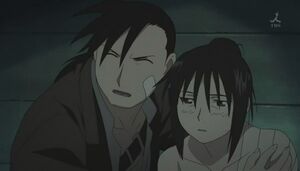 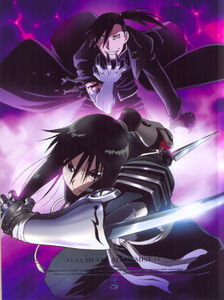